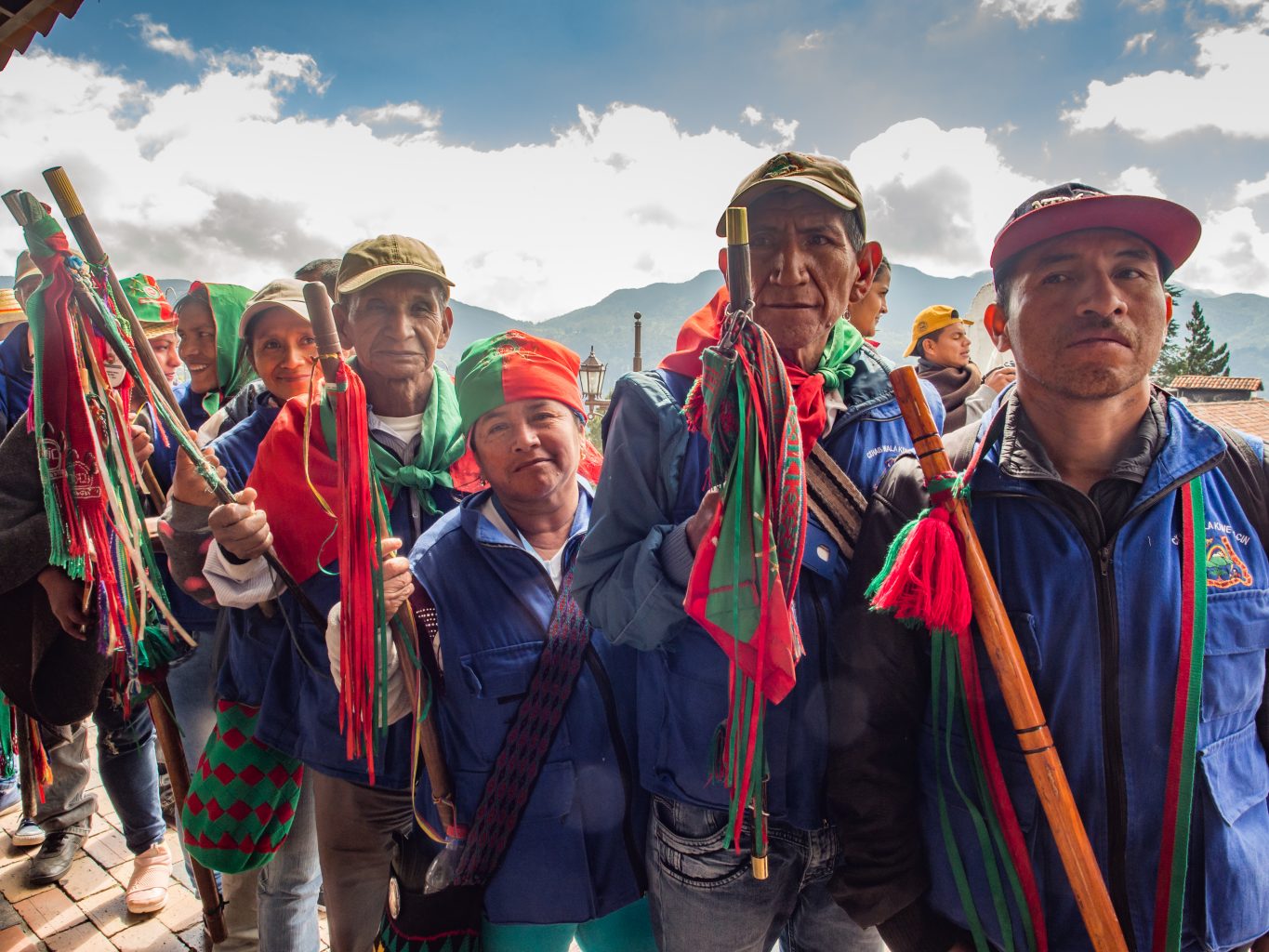 Throughout history, peoples, social sectors, and majority populations have faced the multiple impact of various forms of violence. These have been manifested in powers which, at each point in history, have been perceived as absolute and invincible and, in any case, asymmetrical for those who are subjected to them. Their provenance has been diverse: monarchic, oligarchic, colonial, invasive, dictatorial, military or armed, state and/or private, national or transnational economic power, among others. In any of these situations, such powers have been dominant, exclusive, abusive, and threatening. They have frequently capitalised on political and/or economic interests, have imposed repression and exploitation and, along the way, snuffed out many lives or placed them at high risk. Moreover, they have disregarded the ethnic status of peoples and, in general, the humanity of all the sectors mentioned above, and have also devastated such essentials of life as culture, territory, and the autonomy of different groups.

Additionally, at different points in history and in a variety of places, these abused sectors have, by means of peaceful methods, managed to stop, transform, or attenuate the impact of such violence. How can such an unimaginable achievement be explained? How did they do this? The answer can be summed up in two words and is repeated in its analogous names: civil resistance, and/or “nonviolent resistance”, “civilised resistance”, “unarmed rebellions”, “war without weapons”, and others.

This civil resistance, its meanings and characteristics, the challenges it faces, and present and future alternatives, represents the core concern of the reflections that follow. Emphasis is also given to the fact that it is essential today as a strategy of resilience, overcoming and disrupting violence in situations where it is inflicted by state actors and such non-state actors as organised crime.

What makes civil resistance a recurrent mechanism through history?

The practice of civil resistance involves aspects of considerable interest, as reflected in the ways this kind of resistance, its potentialities, and its scope are understood. Accordingly, it has come to the attention of several disciplines in the social sciences, a range of artistic expressions, and peacebuilders wherever they may be, and with greater emphasis since the 1990s.

The civil resistance is essential today as a strategy of resilience, overcoming and disrupting violence in situations where is inflicted by state actors and such non-state actors as organised crime

One interesting aspect is the recurrence of civil resistance throughout history. This being the case, it is worth asking what the following groups have in common: the Egyptian craftsmen of Waset who in 1166 BCE, during the reign of Ramses III, decided to stop working on the royal tombs in order to be paid their wages; the Roman plebeians who, in 494 BCE, withdrew to the Aventine Hill until the nobles recognised their political rights; the Yaqui tribe of Mexico who, in 2010, embarked on a nonviolent struggle against businessmen and the state of Sonora and their “Independence Aqueduct” megaproject, which disregarded their rights over their river and territory; the winners of the Right Livelihood Award, the Asociación de Trabajadores Campesinos del Carare (ATCC – Association of Peasant Workers of the Carare) which, in 1987 and in the midst of crossfire, organised to declare to all those involved in the country’s armed conflict that, thenceforth, peasants would not lose their lives because of this conflict, and that they were not enemies but they did not want to be caught up in their armed clashes; and the Black communities of the Consejo Comunitario Mayor de la Asociación Campesina Integral del Atrato (COCOMACIA – Greater Community Council of the Integral Peasants’ Association of the Atrato River), in the Middle Atrato wetlands of Chocó, Colombia, which organised in 1982 to prevent the state from conceding their territory to private logging companies, and to achieve recognition of their ethnic condition and their rights.

The answer to this question is the same in all cases: an inspiring, intelligent, collective opposition, and a dignifying challenge to orders established by various kinds of violence and their actors, and a strategy based on nonviolent methods and deployment of peaceful transformative power.

In the twentieth century, campaigns of civil resistance were more common than is generally imagined, and their achievements were greater than those of armed resistance. Nevertheless, this does not mean that attempts at civil resistance always achieve the goals they have set and that they are successful. In general, the most effective civil resistance campaigns are partially successful, and some of them accept that one possible result can be the frustration of not achieving any of their aims because they are crushed and defeated. There are several reasons for this. The powers faced by nonviolent resistance are enormous and, consequently, the asymmetries in the power relations are also huge. Moreover, conflicts are dynamic, as are the contexts in which the various forms of resistance appear and are conducted. Finally, several circumstances can change. The experience of the Black COCOMACIA communities in Colombia was that, in the first five years of the 1980s, they managed to get the state to revoke its concession of their land to the logging companies, and also to recognise their existence as a people, as well as their special relationship with the land in the middle Atrato wetlands of Chocó. Yet, it was only considerably later, in 1993, that the Law 70 In Recognition of the Right of Black Colombians to Collectively Own and Occupy Their Ancestral Lands was passed. Something similar happened with the Guarijío people in Mexico who achieved recognition as an Indigenous people and of their territory in the mid-1970s but later, in 2011, when they started their campaign of resistance against the Los Pilares dam, they did not achieve much.

In general, the most effective civil resistance campaigns are partially successful, and some of them accept that one possible result can be the frustration of not achieving any of their aims because they are crushed and defeated

The meanings of civil resistance

Civil resistance has several meanings. Generally speaking, it has been understood as collective opposition and nonviolent struggle. From the standpoint of peace studies, it is seen as a mechanism for the management and positive transformation of conflicts, with attention to the peaceful methods it employs, its potential for bringing about change, and constructive social and/or political transformations, depending on its nature. Also notable is the fact that this form of resistance reveals the power of collective action and the scope of nonviolent methods. Furthermore, it brings some balance to the asymmetrical power relations between those who are resisting and the actors who are being resisted, and it very often represents the gateway to such peacebuilding mechanisms as mediation and negotiation. Likewise, these aspects constitute pacifist empowerment as they develop peace-making potentialities and skills among those who generate and drive this resistance.

What characteristics give scope to civil resistance and endure over time?

Experiences of civil resistance recorded and documented, especially since the 1990s, have led to a significant accumulation of knowledge about the characteristics of this type of resistance. These are related with their origins, the actors who set the bounds and get them moving, the interests at the core of the exercise of resistance, their potential, their methods, and conditions for their effectiveness. These features of civil resistance are described below:

Civil resistance is a process and it develops over time, it is collective action and it is rooted in the social base

Each experience of civil resistance is unique and unrepeatable. As such, they have their own features that are related with the contexts in which they originate, the sectors of the population that produce them, the causes in which they are rooted, and the conditions that favour or hinder their achievements. Nevertheless, the aspects mentioned in this section are essential to this form of resistance and common to all of them, albeit with different developments and achievements. Moreover, seen as a whole, they represent the potential of this nonviolent resistance to achieve its goals.

Each experience of civil resistance is unique and unrepeatable, with own features that are related with the contexts in which they originate, the sectors of the population that produce them, the causes and the conditions that favour or hinder their achievements

The challenges of civil resistance

There are no perfect experiences of civil resistance but only perfectible ones. Transitions from experiences of resistance using violence because of extreme needs of defence to civil or nonviolent resistance have sometimes been recorded, which is what happened with the Yaqui in Mexico and the Indigenous people of the Cauca region in Colombia. In other cases, in highly polarised societies, people who engage in nonviolent resistance can be opposed by other civil society groups which take the opposite position. Furthermore, each experience faces the challenges presented by the types of violence and their actors at each and every historic moment. This means that they cannot be considered in a lineal fashion, and neither can the conflicts that generate them. Some of these challenges are detailed below:

Notwithstanding the challenges faced by the processes of civil resistance, it will continue to be the most accessible, intelligent, and suitable mechanism for peoples, dominated majorities, and excluded minorities

Alternatives for the present and future

Notwithstanding the challenges faced by the processes of civil resistance, it will continue to be the most accessible, intelligent, and suitable mechanism for peoples, dominated majorities, and excluded minorities. Turning to this form of resistance is the best or only alternative available for opposing the various forms of violence by peaceful means with the aims of protecting basic needs and transforming the reality.

Drawing on the learning accrued from earlier experiences, or lessons learned from similar processes, strengthens the processes of resistance. It will make it possible to detect actions taken to confront the great challenges of the past and, at the same time, offers elements for adapting to the challenges of the present.

The experiences of civil resistance are the heritage of peace and, as such, should be recognised, supported, and reinforced by all relevant peacebuilding actors

Discipline, training, creativity, and planning undoubtedly constitute important tools for honing the exercise of civil resistance and favouring progress in its methods and strategies.

The combination of civil resistance methods with others applied in peacebuilding endeavours, especially mediation and negotiation, continues to be very important.

Alliances with other experiences of civil resistance could come to be more significant in the face of current challenges. They enable joint, critical analysis of reality, while also nourishing repertoires of methods and strategies. Furthermore, this favours coordination in the project of attaining the elusive, longed-for aim of having a greater impact at the national level.

Education for peace should give emphasis to training in civil resistance, its meanings, and the windows of opportunity it offers in terms of consolidating democracies, peaceful conflict resolution, and peacebuilding.

The experiences of civil resistance are the heritage of peace and, as such, should be recognised, supported, and reinforced by all relevant peacebuilding actors.

[Article translated from the original in Spanish]

Doctor in Peace, Conflicts and Democracy from the University of Granada, Spain; She has a Master in Political Studies from the Pontificia Universidad Javeriana. She is also a researcher for peace and a teacher on issues in peacebuilding. She is currently linked to the University of La Salle, where she coordinates the Peace Laboratory.