Mexico and the Missing 43+

Carlos Martín Beristain
Doctor, specialist on the care of victims of violent conflicts 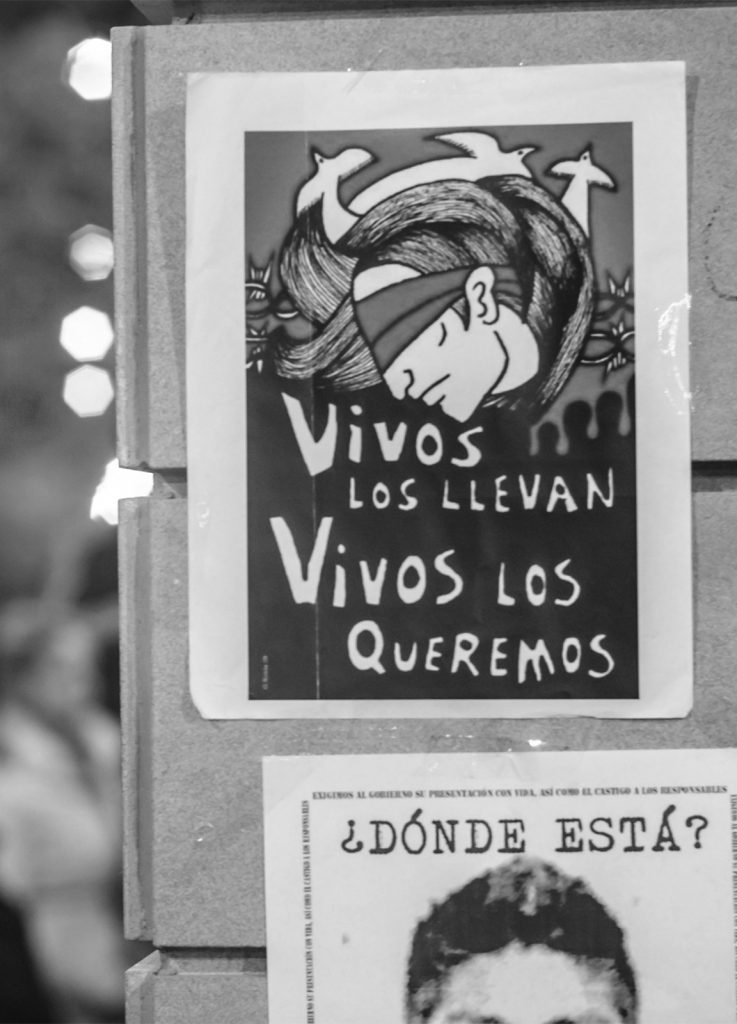 The case of the 43 missing students of the Escuela Normal Superior in Ayotzinapa, Mexico, the homicide of three others as well as that of three more persons in the night between 26 and 27 September 2014 in the city of Iguala (Guerrero), together with many more people wounded – some of them severely – has been a wake-up call for the country’s conscience and that of the world. The pain and suffering of the relatives who, since the very beginning, have mobilised for the search and the investigation of the facts, together with the initial negotiation and opening of Mexico before the Inter-American Commission on Human Rights (IACHR), have led to the creation of a new mechanism of technical and legal assistance, appointed by the IACHR with a threefold mandate: support in the investigation of the facts, the search for the missing persons and support for victims and their relatives. The so-called Grupo Interdisciplinario de Expertos Independientes (GIEI, or Interdisciplinary Group of Independent Experts), to which five people have been assigned, has been created as a consequence of this painful situation and carried out its task of assisting in the healing process during two six-months periods (from March 2015 to April 2016).

Part of the Group’s work included the publication of two extensive reports, relating on the investigation, searches and victim support. The GIEI pointed out that empathy constitutes a fundamental tool in the support of the relatives going through this tragedy, and for the investigation of the facts itself. For this reason, the relatives’ voices and experiences have been included in the reports.

“What I can tell right now, wherever my brother may be, is that I have strength and that I have the hope to find him back soon. And if my brother comes back to us alive, I will be very happy, together with my son, my wife, my whole family. I will be grateful to God and to all the people who have supported us. And even if he lost his life, I will still be grateful to all these people. But I have to stay positive, as long as there is no proof. And this is where I have to be with the parents and fight, to find them”.

On the other hand, the reports revealed that there was no basis for what was called the “Historical Truth” in the evidence and the investigation that was performed. This version had been claimed by the Attorney General of the Republic, Murillo Karam, stating that the youngsters had been mistaken for drug dealers, murdered in a garbage dump, burnt and carbonised in open air, and their remains thrown into a river by a drugs traffic cartel.

The cases of forced disappearances are continuous legal offences which cannot be closed, in the same way the pain of the victims and relatives cannot be healed

Our investigation led to the conclusion that these young people did not have the intention of boycotting any political act, nor did they belong to or were infiltrated by any organised crime group, as was said. There is no evidence of any such thing. These youngsters had planned to travel by bus to attend the commemoration of the 1968 Tlatelolco massacre in Mexico City. The events of the night in Iguala made around 180 direct victims, including the 43 people missing, and occurred in nine different locations with gun shots and violence, lasting for 4 to 5 hours, and with direct involvement of the three municipal police forces of Iguala, Cocula and Huitzuco. Authorities of different levels possessed information on the arrival of the students, first to the region, and later to the city of Iguala, including state, ministerial and federal police, as well as the military, so they could not be mistaken for drug dealers. The arrests of the students were made while two officers of military intelligence were monitoring the events.

The official version states that the youngsters had taken four buses, but the investigation of the GIEI has demonstrated that the existence of a fifth bus had been omitted; this was concealed, and the investigation on this bus was later distorted. Based on public information from the United States’ Justice Department, we discovered a case in which heroin was trafficked from Iguala to Chicago with previously modified passenger buses. For the GIEI, the only hypothesis that could explain an attack of such scale would be if the youngsters, without their knowledge, took something much more important than some buses. Probably, they took the fifth bus, loaded with heroin or money, which would explain the severity of the operation, aiming at preventing the buses to ride out, and the growing aggression against them.

The truth can be uncomfortable, but it is also healing

Another key element was the explanation of the final fate of the students, given by the State. After a scientific study had been carried out by doctor Torero on the dynamics of the fire, the GIEI claimed that the massive burning of 43 bodies in this aforementioned setting, in open air and within 16 hours, could not have taken place. That the scientific data of the quantity of firewood, level of impact on the location, time, pyre type, satellite pictures, fire tests, eyewitnesses, etc. demonstrated that, what was described in the declarations of some of the defendants, was impossible. This conclusion was later supported by another expert report, carried out by the prestigious Equipo Argentino de Antropología Forense (EAAF, or Argentine Forensic Anthropology Team). As a consequence of this, the need to reopen some lines of investigation was claimed. The defendants, accused of being part of organised crime and whose declarations were the basis on which this version had been built, all showed serious indications of torture, according to a study, carried out by the GIEI and endorsed by the International Rehabilitation Council for Torture Victims (IRCT) from Denmark.

And finally, the GIEI, reviewing video recordings made during those days, discovered that the bag, found in the San Juan river with remainders of a bone, belonging to one of the missing students, Alexander Mora, had been manipulated, that other bags had been moved and that the scene of the river had been tampered with, the day before its official “discovery”; the GIEI also discovered the involvement of Tomás Zerón, the head of the Agencia de Investigación Criminal (Agency for Criminal Investigation), in these actions which had no legal basis whatsoever, nor could they be found in the records.

As the GIEI investigation progressed and the first report was made public, a campaign was started against the Group by some Mexican media channels and famous people. When it is not possible to question the reports, as in this case, the method of discrediting people is normally used. These attempts, in spite of their failure, brought along strong pressure on the group, and show the interest of very powerful people and groups in concealing the truth.

In April 2016, after the exit of the GIEI, a mechanism was created by the Inter-American Commission on Human Rights to supervise the compliance with the twenty recommendations and lines of investigation the Group had described in its second report. This mechanism will probably be operational, with periodic visits, until November 2017.

The GIEI had a mandate to assess and give recommendations on the support for victims and relatives. This part is very new and, at the same time, easily forgotten in many cases. Our experience shows that it is possible to carry out an investigation and searches with scientific methodologies as well as adequate support and centrality for the victims in the investigation, without whom we would not have discovered some key elements of evidence, like the message of one of the students to his mother in the early morning of the 27th: “Please, mum, I urgently need a recharge”, time after the moment when, according to the declaration in the official version, he had been killed.

The group helped to establish areas for relations between the victims and the State, to build bridges where there was abyss, which was very important for both sides. Nevertheless, the obstacles to the investigation and the lack of effective response to the Group´s recommendations have led to a higher level of mistrust on behalf of the victims today. The GIEI brought to the attention of the State and the Mexican civil society that the case can be solved, that the suggested lines of investigation are clear and that an effective commitment for the resolution and the search for the missing persons needs to be demonstrated. Also, that the cases of forced disappearances are continuous legal offences which cannot be closed, in the same way the pain of the victims and relatives cannot be closed during a permanently open process of searches, anguish and suffering. And that resolving this case can help Mexico to break the spiral of corruption-violence-human rights violations in which the country has been caught over the last decade.

The truth can be uncomfortable, but it is also healing. Against the despair of resignation, brought along by impunity, the GIEI has shown a possible path for other relatives and cases. What it means for a small group to lay their hands on this pain, support the victims, promote more effective strategies of investigation, following the international standards, has been related in the two extensive reports Ayotzinapa I and II of the GIEI. In search of a language, capable of giving an account of the depth of this story, I later wrote a book, in an attempt to digest this experience, because writing is also a way of living experiences at the time they want to be lived in. The book El tiempo de Ayotzinapa is an account of the process in first person that wants to establish a dialogue, along the lines of the quote by John Berger: “The promise is that language has acknowledged, has given shelter, to the experience which demanded, which cried out”.