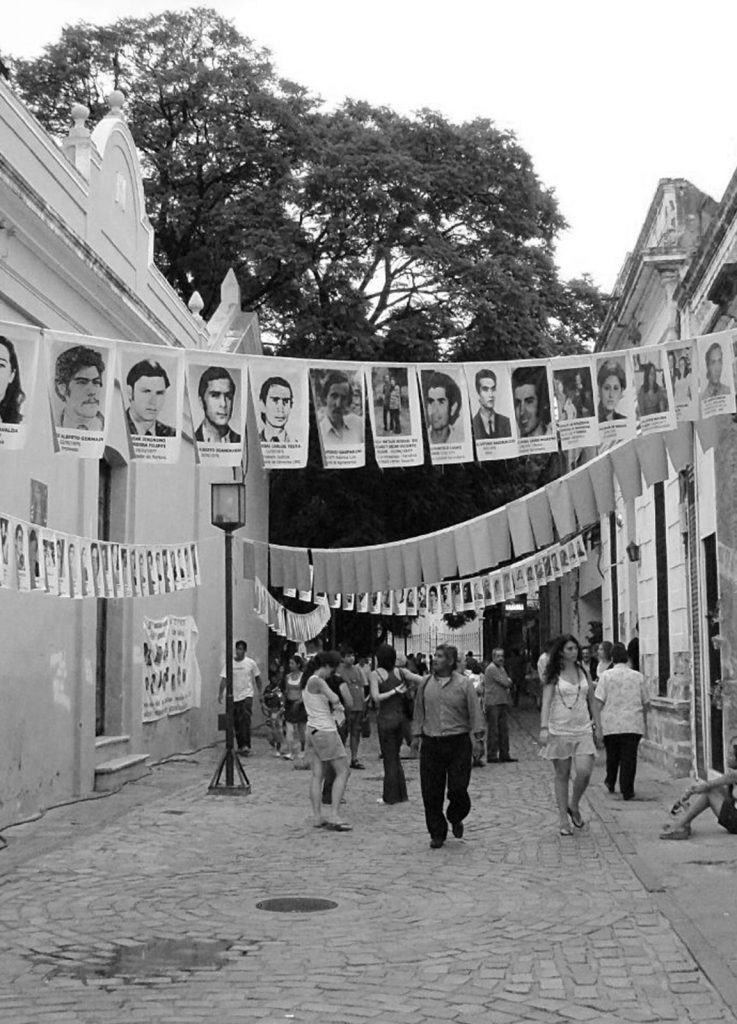 The Preamble of the Rome Statute of the International Criminal Court recounts: “Mindful that during this century millions of children, women and men have been victims of unimaginable atrocities that deeply shock the conscience of humanity” (para.2) and further: “Determined to put an end to impunity for the perpetrators of these crimes and thus to contribute to the prevention of such crimes” (para.5).

Policy makers and important sectors of public opinion tend to be inclined to turn their back to the atrocities of the past and rather embrace the precept of a punto final and thus face the present and the future from the perspective of a new begin. The past is thus regarded as a complex and inconvenient truth that operates as obfuscating the way ahead. This approach serves however a concept of truth that falls short of the compelling prescriptions of the Right to Justice embodied in the inclusive trilogy (i) the Right to Know, (ii) the Right to Redress and (iii) the Right to Reparation.

The Trilogy of Justice

The trilogy of justice of core rights to know, to redress and to reparation, elaborated in the UN Set of Principles to Combat Impunity1 and in the UN Basic Principles and Guidelines on the Right to a Remedy and Reparation for Victims2, has become the basis of the mandate of the UN Special Rapporteur on the promotion of truth, justice, reparation and guarantees of non-recurrence initially established by the UN Human Rights Council in 2011. It seeks to respond to the suffering of the victims of the barbarous acts, which in the language of the Universal Declaration of Human Rights have outraged the conscience of humankind and thus proclaimed the advent of a world in which human beings shall enjoy freedom from fear and want as the highest aspiration of the common people.

It may appear that the trilogy of justice addresses primarily or even exclusively a global community whose concerns are related to present and future living conditions and thereby overlook the outcries and the suffering of the past. It is in this context that the tension between truth and denial reveals itself, not as dormant but rather as a dominant feature. In the same context I became impressed by the authority and profoundly humane analysis expounded by Stanley Cohen in his States of Denial; Knowing about Atrocities and Suffering3.

Truth and Denial, Accountability and Acknowledgement

Against the background of the upsurge and awareness of suffering, normative standards of justice included in national and international instruments came progressively to the forefront. The UN Set of Principles to Combat Impunity and the UN Basic Principles and Guidelines on the Right to a Remedy and Reparation for Victims, already referred to above in connection with the trilogy of justice, affirm the prescriptions of accountability and acknowledgement, with ensuing rights and duties, reflected in the Inalienable Right to the Truth and the Duty to Preserve Memory4.

Insofar as these rights and duties are progressively promulgated and invoked, counter arguments of denial reach pernicious levels in substance and in vocabulary. In outlining elementary forms of denial, Stanley Cohen distinguished three types of denial: Literal Denial as an assertion that something did not happen or is not true; Interpretative Denial in terms of changing words and using euphemisms; and Implicatory Denial not contesting the facts but rather their psychological, political and moral implications. This typology of denial affecting peoples and nations as well as individual persons and groups of persons raises crucial issues of accountability and acknowledgement in the perspective of the rights of victims to redress and reparation. While these rights to redress and reparation were regarded as referring to claims of individual persons, both the Impunity and Reparation Principles include collectivities as well. Thus, symbolic reparations such as public apology and setting up memorials are collective forms of satisfaction, but also the provision of material goods and services to restore decent living conditions and to secure health and educational facilities may arguably serve as a mode of collective reparation.

This approach tends to avoid deplorably the implications of accountability and the dividing lines between truth and denial as an opportunistic means to equate political economy with denial. An illustration of such political economy and political opportunism is the relationship between reparation programmes and development programmes. Both “developing” and “developed” countries facing demands for reparations are inclined to argue that development is reparation. It is indeed enticing to make a shift from reparation to development. Thus, complex and agonizing issues of accountability and acknowledgement are being avoided and fail to recognize the essential notion of reparation as a victim-oriented process that keeps faith with the plight of victims and survivors.

To what extent has this moving away from the issues and implications of accountability and acknowledgement a significant effect on the dualistic tension between truth and denial? Here again the typology of denial advanced by Stanley Cohen provides relevant insights insofar as the notion of implicating denial, while not contesting the facts, does raise questions of psychological, political and moral implications.

The Vocabulary of Truth and Denial; the case of enforced disappearances in Argentina under the military dictatorship

It was after a lengthy and arduous political struggle in the political and human rights arena of the United Nations that the UN Commission on Human Rights established in 1981 a Working Group on Enforced and Involuntary Disappearances whose task was basically to collect, investigate and reveal information on disappeared persons. All the “facts” and “fears” referred to this vocabulary of truth and denial are spelled out in the first two documents of the UN Working Group5.

In the vocabulary of truth and denial emphasis has to be put on the need to call names, not only numbers, as an imperative and inclusive principle regarding the issue of enforced disappearances

Argentina is selected in the truth and denial context because the political and diplomatic branches of government during the military dictatorship in the late seventies and early eighties manifestly developed the most frantic and sophisticated strategy to counter “supposed facts” and “orchestrated accusations” as false, fraudulent and the result of action allegedly carrying out by the terrorists and subversives themselves. Similarly, Argentina argued that extremists were wounded in fighting and carried off by their accomplices to die later on; that deserted members of subversive organisations were hiding in cities, or the result of abduction by subversives themselves.

The Argentine government took also strong issue with what they described as a destructive campaign of defamationoften “fomented” from abroad by false “witnesses” to be denounced as insidious and totally lacking truth. The UN Working Group included in its reports a series of names and information on clandestine detention centres, among these the infamous Escuela Superior de Mecanica de la Armada (ESMA). The Argentine authorities responded that in the Argentine republic there had never been any secret or any clandestine places for which the authorities carried responsibilities. However, they argued that in the struggle against terrorism the forces of law and order had discovered innumerable secret cells called “people’s prisons” by the terrorist gangs; in addition to housing businessmen, civil servants and soldiers, many of whom were killed there, were frequently used to punish and kill members of the gangs themselves under harsh rules for punishing treason and desertion by their members.

The presumed disappearances of minors was also frequently raised by the UN Working Group in its communications with the Argentine authorities. In this regard, are well-known the persistent and courageous efforts by the Grand-Mothers of the Plaza de Mayo to trace their children and grandchildren, notably also their daughters who were abducted while being pregnant and having expectedly given birth to minors while in captivity. Obviously, the Argentine authorities felt that in this context a divergent line of arguments had to be used than implicating terrorist and subversive gangs. Here, it was argued that numerous institutions exist of foster-bodies and families and welfare institutions taking care of abandoned minors whose identity is unknown. It was argued by Argentina that in all ages and in all countries many children are abandoned or found to be in need of care without any indication as to their identity.

As an imperative and inclusive principle regarding the issue of enforced disappearances in Argentina in the context of the vocabulary of truth and denial emphasis has to be put on the need to call names. Not only numbers but names are counting. In the search for disappeared persons, the identification of persons by their names is of crucial importance. International human rights standards explicitly affirm the right of every person to have a name registered by law. For instance, the UN Convention on the Rights of the Child obliges to respect the right of the child to preserve his or her identity, including nationality, name and family relations (article 8).

While finalizing in 1993 the study entrusted to me concerning the right to restitution, compensation and rehabilitation for victims of gross violations of human rights and fundamental freedoms, I quoted in my conclusions and recommendations an excerpt from a thoughtful lecture delivered by José (Pepe) Zalaquett who served, in addition to many other commitments, as member of the Chilean National Commission on Truth and Conciliation. Today, some thirty years later, the words articulated by Pepe Zalaquett are highly valid and will remain a leading premise in the context of the Truth and Denial dialogue. It reads:

“Truth is considered an absolute, unrenounceable value for many reasons. To provide for measures of reparation and prevention, it must be clearly known what should be repaired and prevented. Further, society cannot block out a chapter of its history; it cannot deny the facts of its past, however differently these may be interpreted. Inevitably, the void would be filled with lies or with conflicting, confusing versions of the past. A nation’s unity depends on a shared identity, which in turn depends on a shared memory. The truth also brings a measure of healthy social catharsis and helps to prevent the past from reoccurring.”

These words will continue to resonate powerfully since Pepe Zalaquett passed away on 17 February 2020 after a period of grave health problems. We owe him deep gratitude.

4. Principle 2 of the UN Set of Principles to Combat Impunity.

ABOUT THE AUTHOR
Theo van Boven is professor emeritus in International Law at the Maastricht University (The Netherlands) and renowned human rights advocate. He has served, among other positions, as director of the UN Division for Human Rights, UN Special Rapporteur on the Right to Reparation to Victims of Gross Violations of Human Rights, first registrar of the International Criminal Tribunal for the former Yugoslavia, member of the UN Committee on the Elimination of Racial Discrimination and UN Special Rapporteur on Torture.

Photography Pictures of disappeared people under the military regime (1976-1983), during the week in commemoration of the coup d’état. Santa Catalina passage in Córdoba, Argentina.