What does it mean to think postcolonially about security? 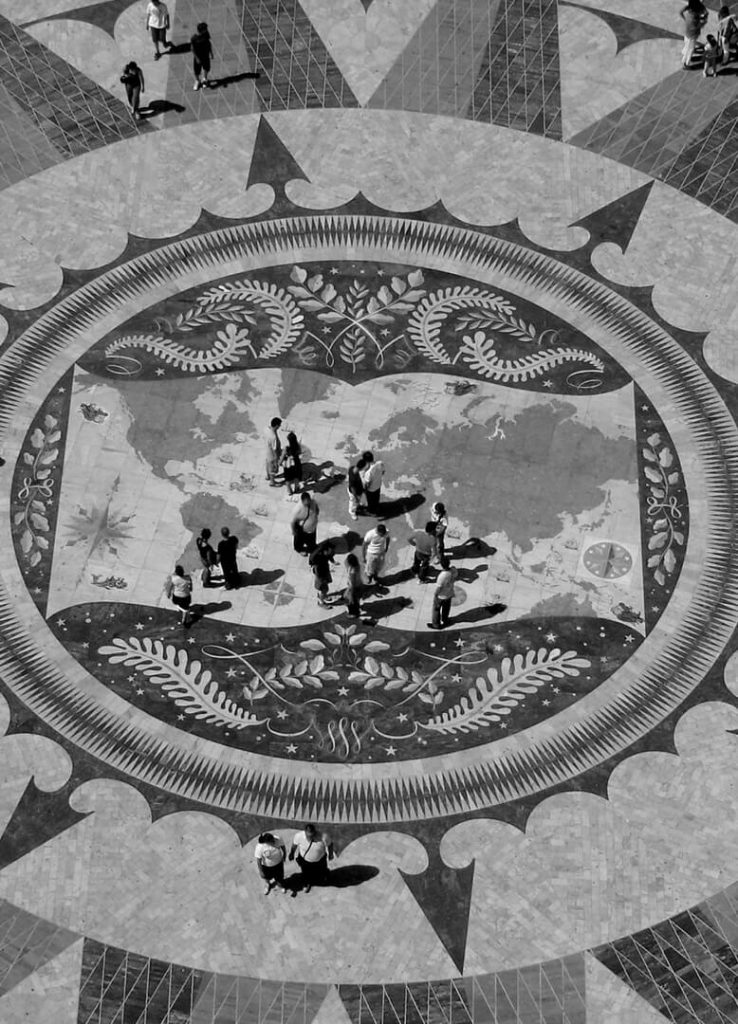 While the definition of ‘postcolonial’ is contested, ‘thinking postcolonially’ need not be. For, it entails taking into consideration the imprint that colonialism has left on the colonisers, the colonised and everyone else. Granted, depending on the power one wields, that imprint is experienced and understood very differently. Those who are better off in terms of the distribution of power in world politics (understood in military, economic or ideational terms) have had, over the years, more opportunities in evading the colonial imprint. The awareness that we need to take that imprint into consideration when thinking about world politics is what I mean by thinking postcolonially.

What do I understand by the imprint that colonialism has left? I will break it down into three dimensions: material exploitation, define and rule, and claim to know. I will conclude by highlighting one way in which thinking postcolonially matters for policy practice.

The material dimension is perhaps easier to discern as rendered memorable in Frantz Fanon’s words: “Europe is literally the creation of the Third World”1. When read together with the preceding sentences, Fanon’s emphasis is on the material:

In concrete terms, Europe has been bloated out of all proportions by the gold and raw materials from such colonial countries such as Latin America, China and Africa. Today Europe’s tower of opulence faced these continents, for centuries the point of departure of their shipments of diamonds, oil, silk and cotton, timber, and exotic produce to this very same Europe. Europe is literally the creation of the Third World.2

The colonial imprint can be broken down into three dimensions: material exploitation, define and rule, and claim to know

Yet, the material dimension is both more straightforward and trickier to discern. This is because some tend to reduce the imprint that colonialism has left to its material dimension alone. Reducing the imprint of colonialism to material usurpation alone, in turn, allows simplistic portrayals that mistake thinking postcolonially for making excuses for contemporary failings of some with reference to their colonial background. This is not to underestimate the significance of paying attention to the material dimension but to highlight that focusing only on that dimension runs the risk of undermining the effort to think postcolonially. Not only is there more than one dimension to the imprint colonialism has left on world politics, it is also not something that merely belongs to history.

It is therefore imperative to underscore that thinking postcolonially is not only about highlighting past relations of material exploitation between the coloniser and the colonised, however important such a task is. It is also about the “colonial present”, which refers to “the constellations of power, knowledge and geography that…continue to colonize lives all over the world”.3 To give an example, thinking postcolonially allows us to see the linkages between the global coffee economy and the 1994 Rwanda genocide so that we move away from assumptions of cultural determinism, or explanations that focus on the consequences of colonial ‘divide and rule’ strategies in making sense of the violence. Thinking postcolonially about the 1994 genocide in Rwanda encourages us to study the “structured economic-material relations [that] make the conditions for genocide possible”, in that:

But then, colonial divide and rule strategies are better comprehended as define and rule policies, as Mahmood Mamdani submitted.5 Put differently, those identity groups that are portrayed as having fought for centuries or as having been played off against each other (divide and rule) are in fact products of “define and rule” policies insofar as community identities were (re)defined and (re)shaped as part of colonial rule: “the native was classified and reclassified, each time in response to political necessity, but always in the language of cultural difference and cosmopolitan tolerance”.6 To stay with the Rwanda case, for instance, “political and economic signifiers” were turned by 19th century colonisers into “‘ethnic’ identities in order to ease the extraction of wealth from the [Rwandan] kingdom”.7 Thinking postcolonially, then, allows us to discern how the colonisers were able to (re)define peoples, (re)shape their community identities and decide who deserves what kind of treatment, and to study the ways in which define and rule policies continue to have implications for contemporary dynamics. Thinking postcolonially about the 1994 genocide in Rwanda allows us to see the linkages between the way coffee trade is structured (which is another colonial leftover) and the colonial (re)shaping of community identities.

That some have been able to define others (tell them who they are and what kind of treatment they deserve) brings us to the third dimension of the imprint that colonialism has left: claim to know. Of the three, this dimension is the most difficult to discern. Yet it is the most important one insofar as it warrants the other two, often precluding the question heading this essay. Let me elaborate.

The former answer (‘We know because we produce universal knowledge’) is unreflective of Eurocentric limitations to knowledge production. Eurocentric limitations here refer to the situatedness of knowledge –that knowledge is not independent of where it is produced and by whom. In the 19th and early 20th centuries knowledge was produced in and by individuals and institutions in Western Europe, which was in a colonial relationship with much of the rest of the world. What some view as ‘universal knowledge’ is implicated in such relationships of power and their contemporary echoes.

The latter answer (‘we know because we aspire to produce non-parochial knowledge’) is aware of and reflects upon of its own Eurocentrism. Parochialism of knowledge refers to the limitations imposed by one’s own local concerns in its production. Eurocentrism is not just another form of parochialism but goes beyond it by virtue of the power that Eurocentric body of knowledge has yielded since the 19th century. Those who insist on the need for not only non-Eurocentric but also non-parochial knowledge fear that thinking postcolonially would amount to cultural relativism, i.e. the presumption that only members of individual cultures are authorised to speak about their culture and such claims cannot be evaluated one against the other. Yet, as Uma Narayan8 has maintained, “commitment to the contextual nature of knowledge does not require us to claim that those who do not inhabit these contexts can never have any knowledge of them” or that communication is impossible. Rather it amounts to an attempt to make knowledge less exclusionary. As Siba Grovogui9 has argued, “belief in the possibility of life beyond the polis has existed elsewhere across history, along with the ambition to develop corresponding moral implements”.

To recap, thinking postcolonially about the third dimension of the imprint that colonialism has left, the claim to know, is about rejecting Eurocentrism and calling for broadening existing perspectives to “account for the multiplicity of political languages and ethical idioms from which differently situated individuals and communities derive their notions of common humanity and social justice”.10 Viewing the call for thinking postcolonially as warranting cultural relativism underestimates the contributions that this body of thought has made. That said, those who claim to know often do not know about such contributions “because of the lack of methods for indexing and cataloguing them alongside comparable and concurrent thought forms”.11

But then, how to address this third dimension which warrants the other two? Writing alternative narratives on ‘non-Europe’ does not suffice. For, what is missing is not narratives about other parts of the world, but relationships in between, explored postcolonially. This is because it is not only the content of narratives about other parts of the world but also the concepts and categories through which they are told that need rethinking. Over the years, apparent absence of non-European experiences from mainstream narratives has been constitutive both of the discipline and of subjects and objects of security in different parts of the world. As with gendering the production of knowledge, it is not only about increasing the number of women contributors, but also about changing “the very nature of those activities and their self-understanding”.12 Thinking postcolonially offers a remedy insofar as students of world politics would learn to challenge Eurocentrism not only by reflecting upon the empirical focus of their narratives, or their situatedness, but also challenge the claim to know on the part of some by virtue of having already defined “the idea of what counts as an explanation”.13

When insecurities are understood as ‘the aftermath of Europe’, self-reflection and other policies of engagement become not only possible but also needed

Having identified three dimensions of the imprint colonialism has left on all students of world politics, let me highlight one way in which thinking postcolonially matters for security policy. Failing to think postcolonially blinds policy-making in important ways. Oftentimes problems occurring ‘beyond Europe’ are portrayed as “before Europe”.14 Needless to say, ‘Europe’ here does not denote mere geography but a particular claim to know about world politics. That is to say, thinking about “beyond Europe” as “before Europe” could be observed in other parts of the world, including but not limited to North America.

Other parts of the world are often portrayed as “before Europe” not only economically (as per usual in such debates) but also normatively, insofar as they were viewed as carrying values that belong to a past world that ‘Europe’ is understood to have left behind. Thinking postcolonially, in turn, allows us to understand the ways in which developments that are portrayed as “before Europe” are at the same time the aftermath of ‘Europe’ as regards their colonial past and/or present. A case at hand is differentiated experiences with ‘the international system of sovereignty’ in Western Europe and Africa throughout the 20th century. Whereas “one regime contributed to the ‘resilience’ of European ‘quasi-states’, another helped to undermine the sovereignty of African entities and, later, to assist in the ‘failure’ of a number of African states”, underscores Grovogui:15

Specifically, the regime of sovereignty applied by European powers to Belgium, from its inception in 1830 to the present, contrasted greatly with that applied to the Congo, from the Berlin Conference in 1884 to the end of Belgian colonial rule in Congo in 1960. The same is true of Switzerland and Zaire in the post-World War II era.

Thinking postcolonially about these cases is important for policy practice. For, how the problem at hand is understood shapes thinking about the solutions. When insecurities in another part of the world are understood as “before Europe”, the solution proposed is fit for those who live in such a past world, i.e. involving violent response (as with the 2003 war on Iraq or the Libya intervention in 2011). 16

However, when those insecurities are understood as ‘the aftermath of Europe’, then self-reflection and other policies of engagement become not only possible but also needed. As seen in the discussion on thinking postcolonially about the 1994 genocide in Rwanda, the purpose would be to uncover “how what is commonly understood as a local ‘ethnic conflict’ can simultaneously be described as an over-determined symptom of a particularly violent neoliberal restructuring of the global capitalist economy”.17 Accordingly, debates about responsibility beyond borders could move away from being merely about the colonial past or the possibility of humanitarian intervention, and towards our complicity in sustaining our ‘colonial present’.

14. McGrane, Bernard (1989) Beyond Anthropology: Society and the Other, New York: Columbia University Press.

Photography: Wind rose on the pavement in front of the monument to the discoveries, Lisbon, Portugal.