Conscription and Conscience in Great Britain 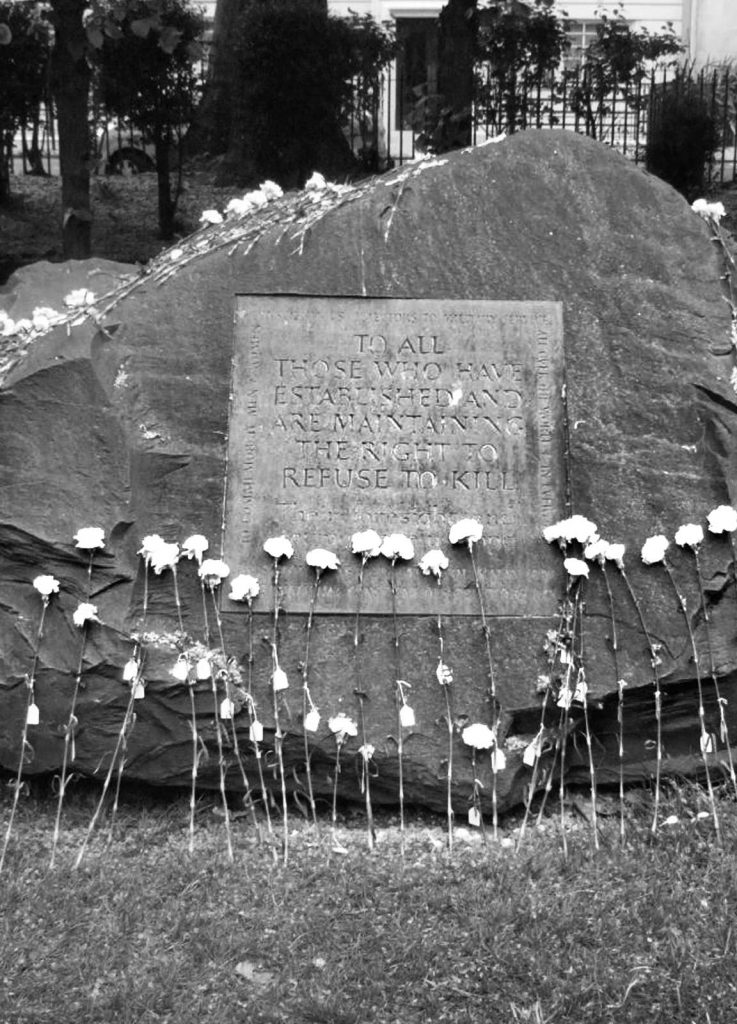 In January 1916 the British government passed a Military Service Act making all single men between 18 and 41 liable to conscription into the army. A second Act extended conscription to married men. Elsewhere in Europe these measures would have been uncontroversial. On the continent, compulsory military service had become a feature of national life, favoured by both the political right and the left. The nationalist right saw it as a weapon against foreign enemies, while the socialist left, particularly powerful in Germany and France, favoured it as creating a “citizens’ army” ready to defend the people against the class enemy at home.

But Britain was different. With grim memories of the seventeenth and early eighteenth century “press gangs”, the belief that military service should never be anything but voluntary had become almost universal. Some within the Conservative party began to espouse conscription during the Boer war, and a National Service League was formed in 1902, ironically arguing that Britain should emulate the “excellent policy” of the Kaiser in strengthening healthy, manly militarism. But the Liberal party, in power from 1906, remained adamantly opposed to any form of compulsion, supported in this by all but one of the forty Labour MPs and the growing socialist movement.

So what caused the 1916 u-turn? First, the early hopes and predictions that the war would be over by Christmas 1914 faded rapidly as the toll of casualties mounted and voluntary recruitment failed to keep pace. When the Conservatives joined the Liberals in an emergency war-time coalition, the pressure for compulsion became intense. An early Conservative proposal was for conscription of “gentlemen only” as an example to the lower classes, described as “the most thoroughgoing example of the rich serving the poor since Christ first preached the principle”. It did not meet with much favour among the rich. But while a popular referendum would certainly have swept any proposals for compulsion into limbo, by late 1915 in political circles it was the conscriptionists who were making the running. Prime Minister Asquith buckled and Britain’s first Military Service Act received the Royal Assent on January 27th 1916 with only 38 MPs opposing it.

It was recognised from the start that some exemptions would have to be made for men engaged in vital civilian work such as farming and mining. But as the Bill made its way through Parliament, a small group of MPs led by Arnold Rowntree and Edmund Harvey, both members of the Religious Society of Friends (Quakers), proposed a conscience clause extending exemption to men who could demonstrate a principled objection to military service. Hastily drafted, bitterly fought over and full of ambiguities which would complicate the workings of the Act for the next three years, the clause nevertheless secured a Parliamentary majority, and Britain could claim to be the first nation to write the right of conscientious objection into its statutes.

But how was the genuine conscientious objector to be recognised from the wily slacker and the coward? The Government gave this thankless task to a network of Tribunals appointed in every locality throughout the country. Inevitably, those chosen to judge tender consciences turned out to be the worthy elders of the community: mayors, priests and parsons, and a military representative to see that as few young men as possible slipped through the net. Although empowered to grant absolute exemption from army service, such exemptions were extremely rare. Most applications were either refused outright, or made conditional on the applicant enlisting in a newly-created non-combatant army corps or accepting alternate work in support of the war effort.

The effect of this was to create two classes of objector: those who could conscientiously accept military service in unarmed units where they would not be required to kill, and those whose objection to participation in war, direct or indirect, was absolute. It was of course the absolutists who proved the prickliest thorn in the side of the civil and military authorities. When ordered by the Tribunals into the non-combatant corps they refused to enlist, were arrested, “deemed to be soldiers” whether they liked it or not, refused to obey orders, suffered cruel and degrading treatment in prison or military detention, and in at least 35 cases received death sentences, commuted at the last minute. Nearly a hundred men died as a direct result of army or prison brutality, and many more suffered physical or mental health problems from which they never wholly recovered.

Two classes of objector were created; those who could accept a military service where would not be required to kill and those whose objection to participation in war was absolute

Between 16,000 and 20,000 men – the number has grown as new research unearths hitherto unrecorded cases – registered as conscientious objectors. Probably more than half of these were members of mainstream churches and fundamentalist sects such as Jehovah’s Witnesses (then known as International Bible Students), Plymouth Brethren and Christadelphians. The single largest religious group was the Quakers (although about a third of Quaker men of military age joined the army voluntarily, (and many more joined the Friends Ambulance Unit). The largest group of those whose objection to war was political rather than religious was the Independent Labour Party (ILP), founded by the socialist pacifist Keir Hardie, who wrote in April 1913: “The workers of the world have nothing to fight each other about. They have no country. Patriotism is for them a term of no meaning.”

But to attempt any sharp differentiation between religious and political objectors is to mistake the nature of the British radical tradition. Many socialists were, like Keir Hardie, Christian socialists, and many young Quakers were members of the ILP. Marxists and Methodists rubbed shoulders in the rolling stream of British nonconformity. Religious and political objection was fully integrated in the brilliantly organised coalition of the No-Conscription Fellowship (N-CF) and the Friends Service Committee, the two-in-one body which tracked every objector, published accounts of ill-treatment and brutality, and incessantly harried the War Office for the release of twice- or thrice-jailed members.

The N-CF was led by two ILP men, Fenner Brockway and Clifford Allen, soon joined by the eminent philosopher Bertrand Russell who edited the Fellowship’s monthly journal, ironically entitled The Tribunal. They were supported by a group of Quaker and suffragist women, most notably Catherine Marshall, an organising genius who ran the campaign when the men were all locked up in prison. The religious/political axis is perhaps best illustrated through comments made by the notoriously atheist Russell, who described his comrades in prison as “vigorous courageous men, full of real religion”. Their joint aim, he added, was “to bring the Kingdom of Heaven on earth – nothing less”.

Their campaign had its lighter moments. When members of the N-CF were prosecuted under the Defence of the Realm Act the prosecutor was a Mr (later Sir) Archibald Bodkin. In a moment of irritation Bodkin complained loudly that “war would become impossible if all men were to have the view that war was wrong”. The N-CF congratulated him on so neat and concise a statement of its own views, and produced posters quoting Bodkin’s words, prominently credited to the State prosecutor. This provoked the Government to prosecute the posters, whereupon the N-CF demanded the arrest of Mr Bodkin as author of the subversive words. The Tribunal proposed that it was Mr Bodkin’s patriotic duty to prosecute himself, and generously offered that, in the event of a conviction, the N-CF would maintain his wife and children while he was in jail. The authorities retired hurt.

When the war ended the N-CF held a final convention attended by 2000 war resisters newly-released from prison or non-combatant service. Clifford Allen told them:

“Every one of us must be only too conscious of how terrible is the comparison between the anguish of those who have died and been mutilated in the war and the test to which we have been subjected… Not one of us would dare to compare our suffering with that of the men who were actually engaged in warfare. Many of them are dead, but we still have the opportunities of life before us. Our lives are forfeit.”

“The N-CF has been completely victorious in its stand for freedom not to kill or to take part in killing. The whole power of the State has not been able to compel members of the N-CF to kill or help in killing. In winning this victory you have won an even greater victory; you have won a victory for the sense of human worth, for the realisation of the value of each individual human soul. It is that, above all, that we must assert and put before the world, that sense that each human soul, each individual growing and living, has within him something sacred, something that must not be warped and destroyed by the imposition of outside forces.”

A century later, that’s a message we should still be shouting from the rooftops.

***David Boulton is the author of Objection Overruled: Conscription and Conscience in the First World War commissioned by Bertrand Russell and first published in 1967 when The Observer described it as “destined to become the classic account of the men who fought for the right to say no to war”. A new enlarged and updated edition was published in 2014 and is available from the Quaker Centre Bookshop, London>.