Rosa Luxemburg: anticapitalism to get to the pacifist eutopia 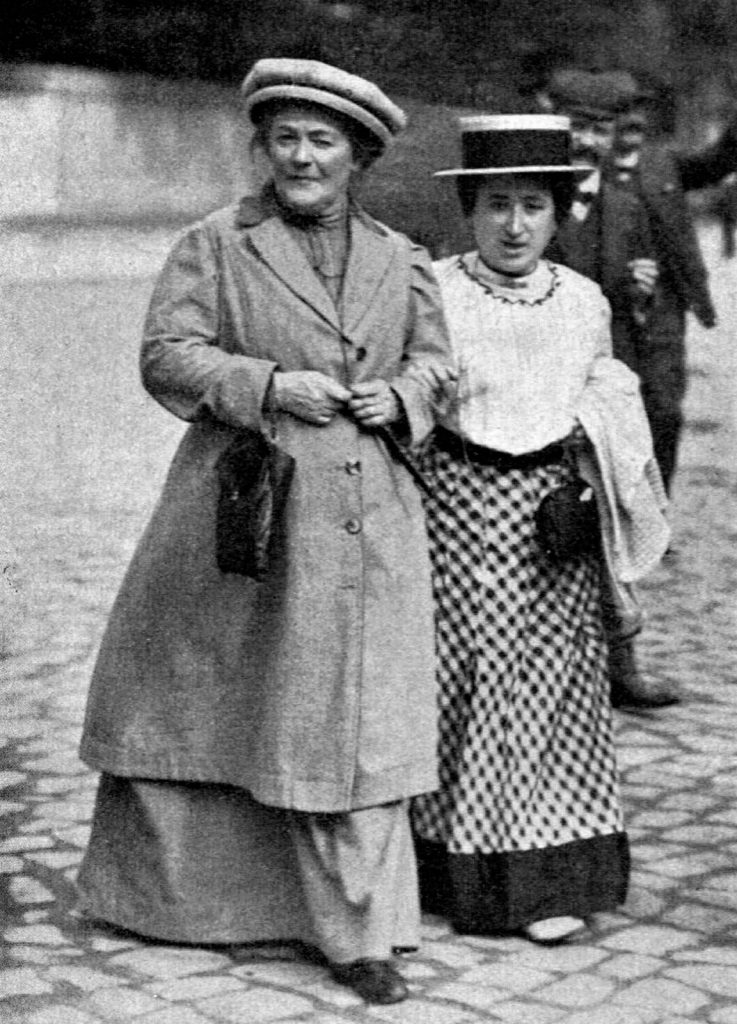 At the beginning of World War I, the voice of the socialist leader Rosa Luxemburg was one of those that most resonated within what is known as the peace movement; a space that is in fact broad and complex. On the other hand, that fact that Luxemburg did not belong to the feminist movement — at least not as we understand it today —has for many years been an ongoing source of controversy within this movement. On this question, it is interesting to read “Rosa Luxemburg’s ‘final error’”, in which María José Aubet writes of Luxemburg’s “frequent and substantial” contributions to Die Gleichheit (Equality), the newspaper for “working women” of which Clara Zetkin was the editor (Aubet, 1978: 301).

While Zetkin’s struggle for women’s rights, and that of other radical pacifist feminists such as the lawyer Anita Augspurg or the activist Lida Gustava Heymann, have never been questioned, there has been debate — and a lot of it —about Rosa Luxemburg’s support for that cause. Without going any further, we have the above mentioned text by Aubet, which refers to Carmen Alcalde’s book La mujer en la guerra civil española (Women in the Spanish civil war)1.

Thus, some theoreticians such as Lidia Falcón and Carmen Alcalde have accused Luxemburg of equidistance, inhibition (Alcalde, 1978: 317) or “lack of vision” (Falcón, 1978: 305) for not giving sufficient emphasis to “women’s emancipation” when talking about proletarian revolution, for sharing the idea held by ​​some female revolutionary socialists — perhaps a little naively when seen in perspective — that women’s emancipation would come automatically thanks to the emancipation of the proletariat.

While it is true that Rosa Luxemburg was not particularly prolific regarding the specifics of feminism as the “new revolutionary alternative for the complete emancipation of women” (Alcalde, 1978: 320) in the face of patriarchal oppression, she did show a special interest in putting before women workers “policies that particularly affect them both as an integral part of an exploited class, the working class, and as women; that is to say, as working women” (Aubet, 1978: 301).

However, Luxemburg’s constant refusal to take charge of the women’s section of the Social Democratic Party of Germany (SPD) alleging that this offer was a ploy by the male barons in the party to exile her from the front line of theoretical debate in German socialism; her struggle for women’s suffrage (Dunayevskaya, 1981: 95); or her correspondence over many years with Clara Zetkin2… all show a clear awareness of the sexism prevailing within the party. In one of those letters to Zetkin, Luxemburg herself expressed pride in calling herself a feminist and she wrote to Luise Kautsky in the same spirit in 1911: “Are you coming for the women’s conference? Just imagine, I have become a feminist! I received a credential for this conference and therefore must go to Jena” (Dunayevskaya, 1981: 95).

In 1912, Luxemburg finished one of her speeches in the same vein:

“The present forceful movement of millions of proletarian women who consider their lack of political rights a crying wrong is such an infallible sign, a sign that the social bases of the reigning system are rotten and that its days are numbered… Fighting for women’s suffrage, we will also hasten the coming of the hour when the present society falls in ruins under the hammer strokes of the revolutionary proletariat.” (Luxemburg 1971: 222)

As her writings show, Rosa Luxemburg’s anti-militarist critique and her feminist demands don’t come together, as some might expect, in a biological essentialism which locates women within an imaginary vision of the angel in the home, the source of all goodness and pacifist by nature. Her ideas could be located rather in the intersectionality (if I may be allowed some postmodern licence) of gender and class struggles against the arms race, and in the deconstruction of militarism and its causes as the key political strategy for peace and against capitalism. Thus Rosa Luxemburg asked herself (and asked the SPD) in her Peace Utopias of 1911 about which road to take in order to achieve a peaceful society:

“What is our task in the question of peace? It does not consist merely in vigorously demonstrating at all times the love of peace of the social democrats; but first and foremost our task is to make clear to the masses of people the nature of militarism and sharply and clearly to bring out the differences in principle between the standpoint of the social democrats and that of the bourgeois peace enthusiasts.” (Luxemburg 1970: 250).

From modern capitalism to slasher capitalism: the neoliberal wall of eutopia

Rosa Luxemburg also wrote in Peace Utopias that antagonisms had “reached an acuteness never known before.” Now, 101 years after the outbreak of the Great War and taking into account the over-specialisation and globalization of violence3 that recent decades have brought, it would be correct to say that Luxemburg’s words apply not only to the situation prevailing prior to the outbreak of the First World War, but also to international politics in today’s world, which in general accepts the demands for military spending and arms trafficking that move billions of dollars each year4, making this one of the most lucrative businesses in the world and which also contributes to a situation where “forms of government are forcibly implemented that are in the political and economic interests of the military power responsible for that very implementation” (Butler, 2009: 37). So, this “acuteness never known before” has continued to develop by leaps and bounds over the last century.

We live in a world in which the dystopian has been normalised and in which we continue to pursue the utopia — something which exists nowhere — of peace. Necropolitics, the sovereignty of death — with its associated slasher economic system — has taken over and, as Achille Mbembe explains, “the ultimate expression of sovereignty resides, to a large degree, in the power and the capacity to dictate who may live and who must die. Hence, to kill or to allow to live constitute the limits of sovereignty, its fundamental attributes.” (Mbembe, 2003: 11).

From those “calls for justice and an end to violence” (Butler, 2009: 11) uttered by Luxemburg during the four years of conflict and that would cost her her life in 1919; from those earlier declarations in Reform or Revolution (1898) in which she argued that war had been “an indispensable feature of capitalist development” (Luxemburg 1971: 81) and which were then refined and perfected in the arguments of Pacifist Utopias (“militarism in both its forms – as war and as armed peace – is a legitimate child, a logical result of capitalism” (Luxemburg 1970: 251)); from then until now, we can see that death capital is on a rising market and that, broadly speaking, Luxemburg’s arguments remain fully valid today:

“(…) the present nations, if they really seriously and honestly wish to call a halt on competitive armaments, would have to begin by disarming in the commercial political field, give up colonial predatory campaigns and the international politics of spheres of influence in all parts of the world – in a word, in their foreign as well as in their domestic politics would have to do the exact contrary of everything which the nature of the present politics of a capitalist class state demands.” (Luxemburg 1970: 251).

“militarism can only be abolished from the world with the destruction of the capitalist class state.” (Luxemburg 1970: 251).

The Socialist leader, who personally suffered the injurability and the vulnerability of the body (Butler, 2009), was thrown into a canal in Berlin without seeing her pacifist eutopia fulfilled. And I say eutopia because if it is true that Peace with a capital P seems to us improbable and unattainable, it is equally true that this is not a longing to be sought in the kingdom of Shambhala, but depends solely on human factors which are diverse but possible and achievable, such as political will, social economy, ​​education in values for a culture of peace, real equality between women and men, reparation for victims, reconciliation of opposing parties, the recovery of historical memory, dialogue, mediation… It’s true that it’s a long list. Perhaps the first thing we should do is ensure that any political, social and economic system has as its centre human dignity and not the precariousness of life. Until this happens, for as long as the industry of death, insecurity and inequality continues to be more profitable than the maintenance of life, capitalism and the war economy will continue to throw thousands of human beings into the canal every day.

3. As Sayaka Valencia explains very well in her book El capitalismo gore (Slasher capitalism), when she refers to violence as just one more aspect of economics: “Undeniably, the over-specialization of violence has its basis in military techniques and the preparation for war since, as we know, warfare is envisaged as ‘a vast engineering project whose details could, in every important respect, be calculated as precisely as the stress loadings on a dam or the tensile strength requirements for a bridge.’ Thus, one could say that the creative destruction of slasher capitalism can be seen as a discipline based on the forceful and mortal application of technologies of pain to the body; a discipline which admits no moral judgments concerning economic matters”.

4. According to data of the UN Office on Drugs and Crime, “The global market for illicit fire-arms is estimated at US$170-320 million per year”. Furthermore, according to the SIPRI, global military spending in 2013 was $1,747 billion, “representing 2.4 per cent of global gross domestic product or $248 for each person alive today.”