Interview with Nashieli Ramírez, President of the Human Rights Commission of Mexico City 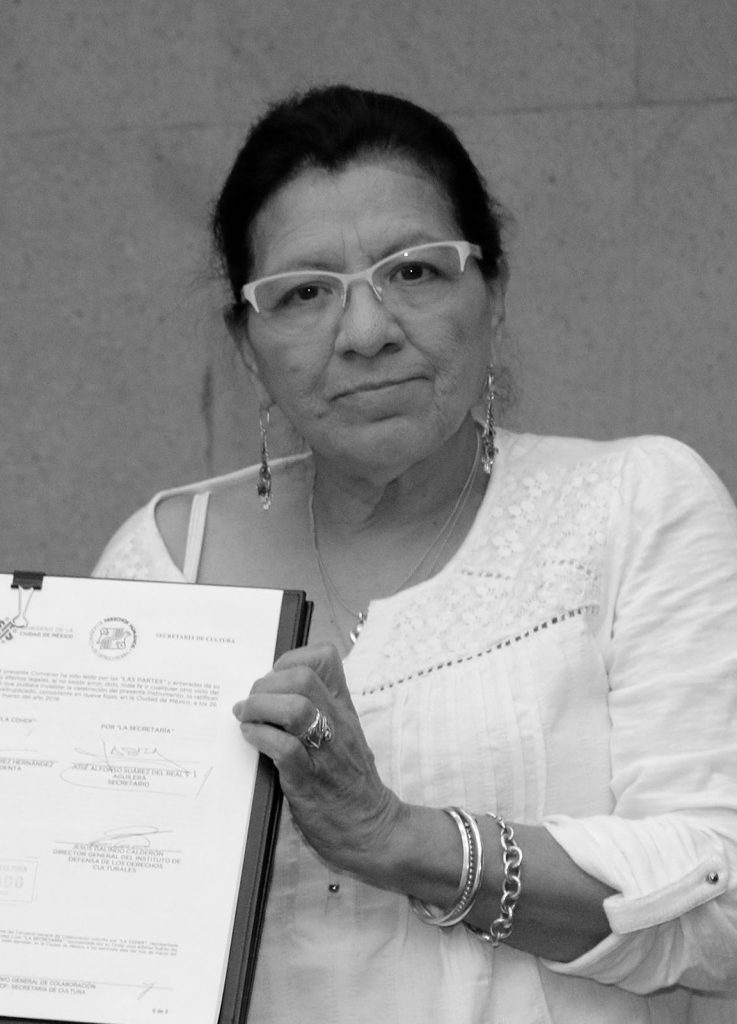 Nashieli Ramírez has a long history as a social activist and human rights defender, with an emphasis on the care of children and adolescents. At the end of 2017, she was elected president of the Human Rights Commission of Mexico City, where she is working intensely to turn around a harsh reality marked by multiple forms of violence: more than 1,800 homicides; 2,300 offences by organised crime and nearly 4,000 disappearances, according to 2018 data. Multiple forms of violence that also have their roots in poverty and a lack of opportunities for children and adolescents.

In a context of very high levels of violence and serious human rights abuses, what are the Commission’s priorities?

When we talk about peace building, we are talking about the promotion and protection of human rights, and nonviolent conflict resolution. In that sense we have a specific area of work in our field, of education focused on children and adolescents. When we say that children are subjects of law, we are affirming that they are social citizens from the moment they are born and that we are not going to accept minimalist visions based on charitable assistance. This agenda, which includes the Convention on the Rights of the Child, allows you to have a broad vision of rights. It is an extremely revolutionary vision concerning the perceptions of today’s world and implies a cultural revolution similar to the revolution in the viewpoint with respect to women.

Safeguarding the rights of children and other vulnerable groups was one of the priorities that you highlighted when you were elected as the new president of the Commission. What form exactly is this attention taking?

What we do is to demand that the authorities guarantee rights for these groups, because their situation of vulnerability, extreme marginalisation and discrimination means the State must accept them as groups requiring priority attention. Our focus is on the attitude of the state, and in this case it is about achieving more visibility and more substantial actions. We’re talk about boys, girls, adolescents, young people… but also about women, because if we want to achieve a significant cultural change we have to work to put masculinities into question. And these vulnerable groups also include those living in the street, those with sexual diversity, with disabilities, deprived of liberty, among the most important groups.

We demand that the authorities guarantee rights for vulnerable groups, because their situation of extreme marginalisation and discrimination means the State must accept them as groups requiring priority attention

Of the almost 40 million Mexican children and youth, almost half live in poverty (91% in indigenous communities) according to UNICEF data. And 60% of children under 14 have experienced some type of violence. Is the culture of violence deeply rooted in Mexico?

The first thing we can see from the poverty data is that social policies that are directed only at adults do not have a direct impact on children. The benefits that an adult receives are not automatically reflected in children if you do not have a specific orientation on them. Here the important fact is the comparison between adults and children living in poverty: the rate of poverty is 10 percentage points higher among children than among adults. Children and adolescents are more vulnerable to falling into poverty than adults, and this requires us to look again at where we are.

Secondly, according to the United Nations, violence against children and adolescents is present basically in the whole world, and the place of greatest violence is the family. In Mexico, and worldwide, we continue to have a deep-rooted habit of educating, above all, using violent blows and methods that do not really encourage alternative ways of resolving conflicts, for example though valuing dialogue and communication above the exercise of violence. In this aspect, Mexico is in the same line as most of its neighbouring countries.

So what would be the specificity of Mexico?

Where I think we have a specific problem is that, in many parts of the country, and also within Mexico City, there is an increase in violence in the community. Studies tell us that boys and girls no longer go out into the street. We exclude them from public space because the environment outside is so highly charged with violence. This has an impact on many other things: your right to play, to public space and to being safe. There are also organised crime groups on the streets that take advantage of this situation.

In this context of violence, impunity and the lack of truth and justice are a constant factor in Mexico. Does this situation call into question the rule of law in Mexico?

Yes. And we have to work to change this. In the case of Mexico City, a committee of experts is working on the transformation of the Attorney General’s Office into a General Prosecutor’s Office, and there is already a fairly strong diagnosis of recognition in terms of impunity and corruption, which has shown up a crisis in the system. The lack of due process leads to us not being able to access truth and justice. And there are many cases of victims of human rights violations that have to do with this lack of due process and access to justice. Now the transformation into the General Prosecutor’s Office opens a new logic for justice.

Do reforms such as the new Victims’ Law or the Political Constitution of Mexico City also open a new path for the construction of peace?

We are inaugurating a new Constitution, one that has the most guarantees, one that gives us a very good framework for action and governance. In terms of local governments throughout the region, the effort we are making is around how to establish laws and programs that are in line with this Constitution. Cities will determine the future of the world and the great strategies of prevention and peace building have to come from a local level. Regarding how we attend to victims of violence, we are launching our Victims’ Commission, while the Local Commissioner for the Search for Persons has just been appointed. The institutional structures are being put in place to enable us to advance a little.

With the new national presidency of López Obrador, do you think that new opportunities for peace building have been opened up?

At a national level, work is being done on the violence prevention system and on security reform, and at a local level we are working on similar lines. As a Commission we are accompanying part of the government’s strategy. For example, in the violence prevention strategy, work is being done on the creation of what we call “pillars”, which aim for the incorporation of young people into education and employment, following the experiences of Medellín or Bogotá in Colombia. But it’s not just about working with children and young people. In Mexico we won’t be able to move forward if we don’t also work with the police. The great security crisis we have includes a great crisis in the police force, so at the same time there has to be a transformation of the police force. And we are working for that, with a proposal of training modules for police on human rights, on the rational use of force… because the security forces are one part of what we have to rebuild.

We will manage to get our children, adolescents and young people to resolve their conflicts in a different way, to live happily in another way

The Commission has also become known for helping the migrant caravans, an expression of nonviolent struggle. Is Mexico City an example of a welcoming city, of refuge?

Yes, totally. In this sense the local response has been different from the restrictive response that is being given in the country as a whole, because the city has a local commitment to defending human rights, to humanitarian aid. Since the end of March we have not received large caravans, but this does not mean that we are not working with this population. The city’s network of hostels, which is operated by civil society organisations, receives between 30 and 50 migrants a week, and there is coordination between the Commission, the authorities and the organisations.

Is there a place for optimism despite the harsh reality of the country?

A table is being established that makes us hopeful but it’s not yet operating as such. Over recent months there have been changes at an institutional level that are going through readjustments, for example, some concerning nomenclature. Here we no longer have a Secretariat of Public Security, but a Secretariat of Citizens’ Security, and the city’s Law for Citizens’ Security was passed recently. Those of us who are dedicated to defending and guaranteeing rights, if we can’t live with hope we’d be better off doing something else. We can build a better country, we will manage to get our children, adolescents and young people to resolve their conflicts in a different way, to live happily in another way. We will continue working in the construction of a fairer world for everyone.