Accompanying local political processes for the reconstruction of dialogue and coexistence. The Basque case 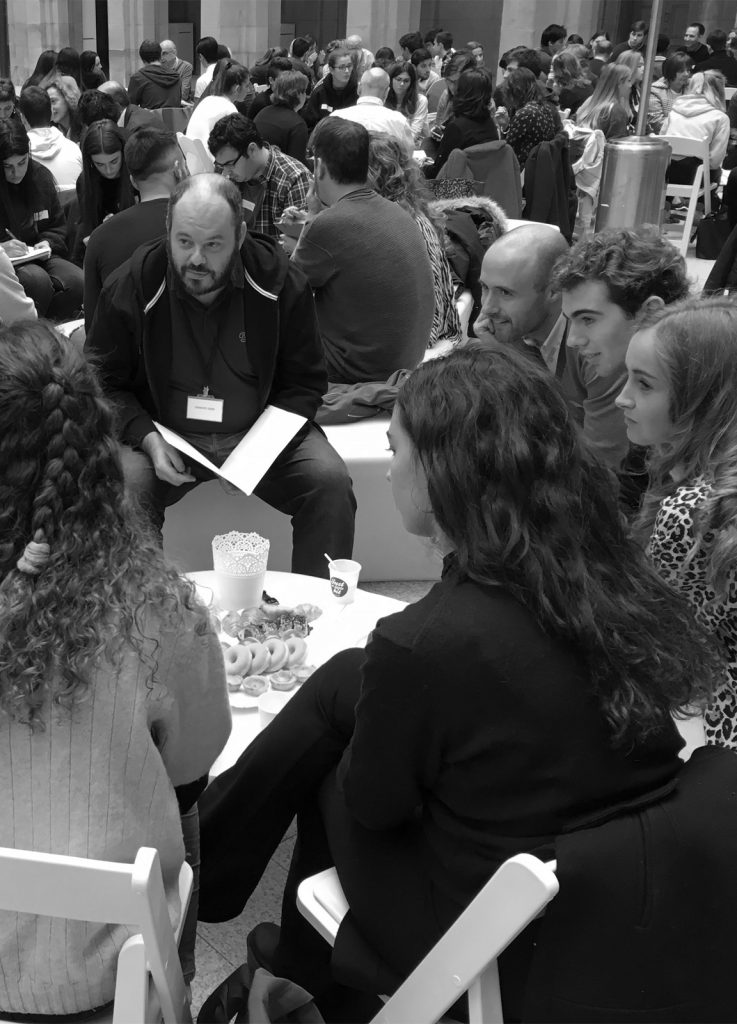 Basque society has suffered violence and terrorism for decades. In this respect, there have been serious violations of basic human rights, while fear, silence, indifference and discord have prevailed, leading to social polarisation between the different ideological viewpoints. The declaration of the definitive cessation of violence by ETA in 2011 was a turning point that has been a significant influence on the conditions and the social and political situation that the Basque Country is currently living under.

In this new scenario, the different social agents and the population in general have begun to put into practice processes that have as a natural objective the reconstruction of coexistence and of relationships that had been damaged for decades. Looking for a way to play a positive role in this situation, in 2008 the Bakeola Centre for Coexistence, Conflict and Human Rights launched an initiative in the political sphere aimed at fostering dialogue between the different political forces — of conflicting sensibilities — that had municipal representation. This initiative began to broaden out in 2013 and as of now it has been carried out in eight municipalities of the provinces of Gipuzkoa and Bizkaia.

The political parties, as a key part of social organisation and of the handling of issues of public interest at all levels, have been and are important players in this process. In this context, we consider that they have the responsibility to take initiatives on two fundamental issues. These are: the recognition and reparation of the victims; and the memory of what occurred in the previous period, affected by human rights violations.

Bakeola’s work here forms part of a broader framework promoted by the Basque institutions1 for the promotion of a democratic culture that respects human rights, victims and memory, strengthening political debate and the positive management of conflicts. With the aim of achieving greater effectiveness and advancing on specific issues, the sessions are carried out with representatives of the Boards of spokespersons of the municipal groups.

We aim to generate spaces that encourage open dialogue that integrates all the voices, establishing respectful relationships in which political differences do not lead to a rupture nor give rise to divisions and mistrust rooted in prejudices

In the vast majority of municipalities where we operate, the Boards of spokespersons include at least three or four political forces. The majority of these politicians have a personal background affected by the context of political violence. Many of them have experienced the consequences of this violence close up, some of them have even been direct victims of it. When the process starts, each representative usually takes up positions hostile towards the rest, reproducing the partisan and polarised dynamics of the political game. However, what we aim to do with these processes is to generate spaces that encourage open dialogue that integrates all the voices and puts people at the centre, establishing respectful relationships in which political differences do not lead to a rupture nor give rise to divisions and mistrust rooted in prejudices.

At the beginning of the sessions we try to lay down preconditions that must be accepted by all, with special emphasis on willingness to participate, openness, trust and confidentiality. These are taken on without problems. Another element that is equally important is the adoption of ethical principles based on respect for all human rights, without exclusions. Although these principles are also accepted by all the participants, they nonetheless generate greater difficulties over the course of the sessions since sometimes they can be interpreted in different ways by the different political forces2.

On another note, in relation to the preconditions, it is also agreed that each participant can express themselves in the language of their choice, Basque or Spanish, without that generating conflict. To carry out the sessions we combine different strategies and methodologies that aim to promote empathic abilities, and in which the ideological and political aspects are relegated to the background. In this way, it is possible to shift the dynamic from the political arena to a personal terrain, making it possible to recognise the pain of others, the damage caused during the years of conflict, and favouring the humanisation of the other.

We try to lay down preconditions that must be accepted by all: willingness to participate, openness, trust and confidentiality

Apparently minor details in the planning of the sessions can have great importance. The fact of holding the meetings in places other than those where these people normally come together, abandoning the town hall to meet each other in another space that can be shared, as the citizens that they are; or the dynamics created by sitting in a circle, without papers or tables in the middle… all these factors contribute greatly to making it possible to converse on a different basis and to establishing confidence.

The difficulty to incorporate the narrative of the other is the principal obstacle that we come across in these processes. But this is not the only one. Opinions and personal experiences can sometimes complicate the adequate management of emotions, generating uncomfortable situations, and sometimes a lack of respect, that can result in a communication breakdown. There are cases of relativising or underestimating other people’s suffering, sometimes even justifying violent actions and also giving more importance to some victims that to others.

In these meetings some participants can be inclined to keep their distance, as a result of the role they play as representatives of a political party. Sometimes such representatives do not express personal opinions because their presence in the process is due to their role as a politician, not as a private citizen and as a person. Furhermore, the electoral calendar also affects this type of process. They become paralysed when there are municipal elections, with an added difficulty arising due to the possibility of the participants changing.

The complex social and political situation that underlies these processes is by no means easy to handle nor is it easy to achieve tangible short-term progress. The meetings require quiet and peaceful spaces, sometimes sheltered from current issues and other interests related to their parties and the media. And above all, they need continuity over time, enabling personal trust to be consolidated among the representatives3. In short, it is about advancing in a process of humanisation, deconstructing the image of the political adversary as an enemy and taking on commitments that go beyond the political sphere and have a recognisable effect on social relations in the municipality.

In some towns and cities, the process has been extended to include other contexts and social agents, setting up citizens’ boards in which to work on these dynamics of bringing positions closer together so as to favour coexistence and democratic debate. It is noteworthy that, on many occasions, ordinary citizens seem to advance faster than the political institutions and can handle the reconstruction of coexistence in a much more natural way, without being affected by party political interests.

In both the political and the public sphere, it is sometimes possible to move towards political agreements with basic minimum principles, concrete plans of action, events for the recognition of victims, joint statements on special anniversaries, etc. The role of Bakeola in these processes of the reconstruction of the social fabric and relations is to accompany the group, and in the end the group has to achieve the progress for itself, recognising and supporting each other without restricting the freedom which the people involved need to express themselves.

In short, we try to emphasise the great value of the human factor. The achievements of this type of processes and dynamics are many and varied, depending in each case on the people who participate in them. All in all, the greatest achievement consists in going beyond fixed political positions so as to achieve normalised relations based on coexistence, respect and democratic culture.

ABOUT BAKEOLA
Bakeola is a center specialized in the analysis of conflicts, which works with social and educational agents from an integral perspective. It promotes processes aimed at improving coexistence, human rights, community development and social construction in order to achieve a culture of peace.

1. The Basque Government and the Provincial Councils of Álava and Gipuzkoa have grant programs oriented on improving coexistence and the promotion of human rights in the municipalities of Euskadi.

2. The acceptance or not of certain ethical principles depends as much or more on the person who participates and on the municipality they are from, as on the political force that they represent. It can happen that the same political party can defend different positions on the same issues.

3. Processes of this type can last for years, taking up more than one legislature, and the results obtained vary in each municipality. The size of the municipality and the relationships established within it, the violence suffered, the plurality of political forces that have representation, or the participants themselves, among others, are variables that determine the duration and achievements obtained.