Neither a destructive war nor an oppressive peace 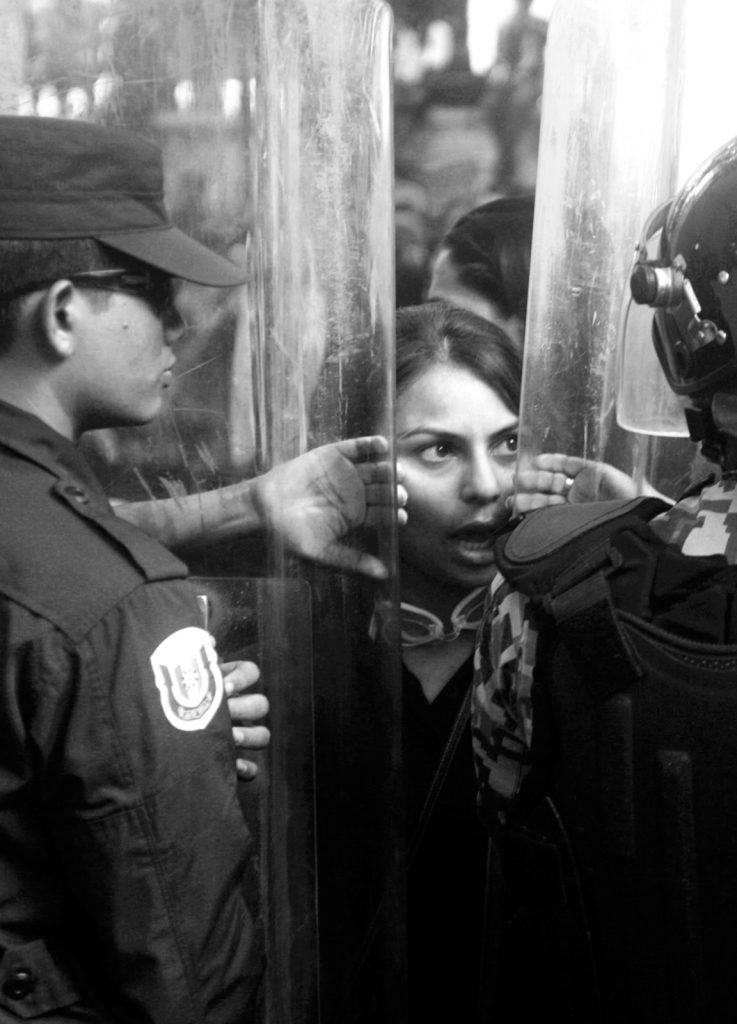 The group that would eventually become the current Dones x Dones (Women for Women) was created by women coming from a variety of feminist backgrounds (antimilitary, solidarity, etc.). We did not even know these women before this or have contact with them. It was after the war in the Balkans and especially when we began to discover the number of women who had been systematically raped during the war that we decided to come together and form a group whose principal aims were to take action against war and the rape of women in armed conflicts.

The first step as a group was contacting women who were victims of armed conflict in the region previously known as Yugoslavia. One of the first contacts we made was with Stasa Zajovic, from Women in Black in Belgrade. This was to be the beginning of what would be the guiding thread for our work: spreading information, raising awareness and implementing initiatives regarding the systematic rape of women.

One of our first actions was to organize a major demonstration against the war in the Balkans and specifically against the rape of women in war. At the head of the protest march was our banner bearing the slogan “We demand that rape be considered a war crime.” The demonstration took place in late 1992 and then we were referring to our group as Women supporting women in the former Yugoslavia.

Catalonia demonstrated great solidarity during the war and many Bosnian families fleeing the horror were welcomed as refugees in our country. Contact with the Bosnian families who were refugees in Catalonia was something completely new for us, was an extremely vivid experience and one that was felt intensely for three years. From the relationship we established with them we became aware that we had to continue as an antimilitarist and feminist group and we set about defining our goals, using the name we use today, Women for Women.

Throughout history, the rape of women, assault and sexual slavery have undergone the construction of a process of naturalization

We began liaising with other groups and social movements as well as with Bosnian women living as refugees. Several proposals and initiatives were the result of this coordination. One, perhaps the one that attracted most media attention, was the “Europe for Bosnia”, which was able to move forward thanks to the work and efforts of the network of feminist women, including Women for Women. It was gruelling work, exhausting at times, but the results were evident. We managed to mobilize civil society to take to the streets and protest against the war in the Balkans.

Over the years we have built a platform to deal with rape and the specific acts of violence against women in armed conflict. These considerations have led us to comprehend how throughout history women have been used as the spoils of war for the conqueror; a bonus prize for the victorious soldier, and how rape, assault and sexual slavery have undergone the construction of a process of naturalization.

Systematic rape is part of a strategy of war and, in many cases, a policy of ethnic cleansing. However, in peacetime violence against women continues to be wielded as a strategy of power, in order to cause and strike terror into women, particularly those who are most vulnerable as a result of poverty, lack of education or other reasons.

We believe that these facts respond to an imbalance in power relations between men and women. An imbalance in a context of heightened insecurity undermines the democratic rule of law and, of course, the rights of those who are most vulnerable in our societies, among whom are women and children.

We wish to stress the fact that this happens in wartime as well as in peacetime, and therefore we use the slogan “No rape either in peacetime or in wartime”.

Faced with the different situations of violence against women, both in times of peace and war, we continue to work towards:

– Ensuring that people see and understand that this violence is the result of the imbalance in power relations between men and women. This feeds on a deep rooted image in the patriarchal system that continues to produce stereotypes and beliefs based on the depersonalisation of women’s bodies. They make the body of women into conquerable territory, something to be conquered and colonized by force of arms and the legitimacy granted by the patriarchal system.

– The denouncement of rape and sexual assault.

Violence against women continues into peacetime; wielded as a strategy of power, in order to strike terror into women

For us the main learning and strengthening experience we have had over the years has been the relationship we forged with women and women’s groups we have met and with whom we maintain those links and contacts. This is the real wealth of our group.

We are part of the International Network of Women in Black against War made up of women from many countries who have organized international meetings, discussions and actions, and who share the same principles. In all this complex network we have learned from the Women in Black of Belgrade, Croatian women, women from Ruta Pacifica (Peaceful Way of women), from the Organización Femenina Popular of Colombia (Colombian Popular Feminist Organisation), Women Memorial in St. Petersburg, the Revolutionary Association of the Women of Afghanistan, the American women of Code Pink, not to mention of course all we have learned from our colleagues and friends at Israel – Palestine Coalition of Women for Peace, and the Shalom Bath women.

It is not always easy to maintain contact but we rely on personal relationships, friendships, i.e., on personal ties. We try to invite each other to come to our houses, either to explain the situation in their country or simply to have a place where they can relax and unwind from the pressures of their situation. Maintaining these contacts is a priority for us and we need to continue to strengthen the relationship that allows us to forge ahead and give meaning to our way of engaging in politics.

What we do and what we advocate

Our work as feminists and antimilitarists also includes efforts to expand and strengthen networks among women and women’s groups here at home.

One of our main commitments is to continue our efforts in the area of prevention of violence. In order to do this, we work together with our colleagues employed in primary and secondary education who strive to prevent violence against children, adolescents and women within a coeducational system. In addition, every year we publish our accounts and tax returns under the slogan “Don’t pay war taxes” and we suggest collaboration with an antimilitarist association. One of the principal days in the calendar when attentions and action are focused on these issues is on May 24th, the International Women’s Day for Peace and Disarmament. Apart from this day, there are occasional calls to organize events when it is deemed necessary to monitor specific developments. In 2006 we published the book “Feminists Against War” which explains our experience.

Women for Women demonstrate in favour of preventing armed conflict. We support campaigns targeting the eradication of defence policies based on militarism, the enrichment of weapon’s producing industries, and maintaining standing armies. We speak out against policies that favour nuclear energy and nuclear weapons, against the politics of fear and terror based on fundamentalist religious ideas; against the patriarchal political system that produces and reproduces violence against women and against civilization.

Above all, Women for Women works towards feminist sorority1 between female human rights defenders in all conflict-torn countries.

1. Term used by feminists to express sisterhood between women