From 15 to 17 October, Barcelona will host the Second World Peace Congress, a meeting of representatives and organizations of pacifism worldwide organized by the International Peace Bureau (IPB) and the ICIP.

With the title “(Re)imagine the world. Action for peace and justice”, the congress will have participants from 40 countries, with face-to-face activities, conferences and workshops, most of which will take place at the Center for Contemporary Culture of Barcelona (CCCB).

The event aims to be a meeting point for different actors of international pacifism, redefine action for peace, and, as the congress’s motto says, reimagine the world through the prism of a culture of peace.

At the same time, it seeks to foster synergies between organizations and individuals and between interconnected social movements fighting for global justice: advocates of peace and disarmament, feminist and LGTBI+ activists, environmentalists and climate activists, anti-racists and indigenous peoples, human rights defenders and trade unionists.

Due to the current pandemic situation, the congress will have a hybrid format, and many of the activities will be available online.

You can check out the programme here. 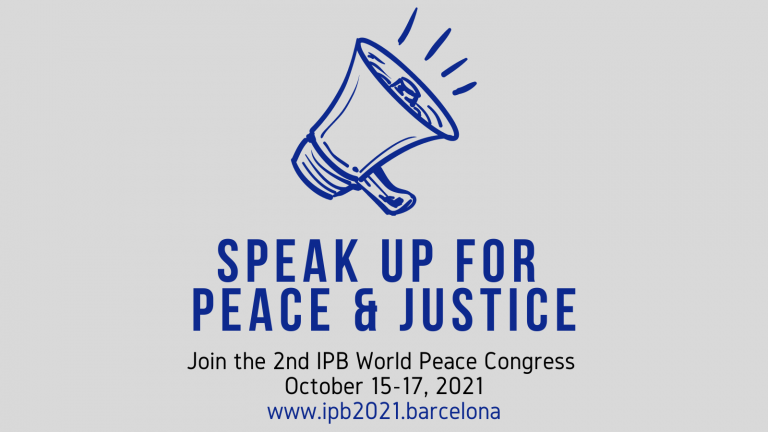 During the three days of the congress, more than thirty speakers will have talks and lectures. Featured names include Noam Chomsky, Vandana Shiva, Jody Williams, Martin Chungong, Wada Masako and Beatrice Fihn. There will also be different workshops on ‘Peace Economics’, ‘Peace Agreements to End Wars’, ‘Nonviolent Journalism for Peace’ or ‘Peace, Racism and Migration’.

The main organizer of the congress is the IPB, an entity that has its headquarters in Berlin and has offices in Barcelona and Geneva. The office in the Catalan capital has been operating for four years.

For the congress, ICIP is preparing various activities, including the opening of a new exhibition on violence in Central America, three conferences and a concert and a tribute to Arcadi Oliveres.

During the three days of the congress, a new exhibition called “Face to face with violence. Stories of resilience in Central America” will be installed at Plaça de Joan Coromines. The Ruido Photo collective created this exhibition.

During the congress, ICIP will also organize three conferences with different collaborators. The activity “Women in the diaspora building peace” will be presented on Saturday at 4 pm. The new ICIP report, “Women and peacebuilding from the diaspora and exile in Europe”, will be introduced during the event.

The second conference will take place on Sunday 17 at 10.45 and is entitled “10 years of peace in the Basque Country: the role of civil society”. It will focus on various civil society organizations in the Basque Country that have played and continue to play an important part in the peace process. The International Peace Conference organized by the Basque social organization Lokarri on 17 September 2011 will also be recalled.

The last of the workshops organized by ICIP will also take place on Sunday 17 at 10.45. It is entitled “Defending human rights, promoting peace.” It is organized with the Catalan Agency for Development Cooperation (ACCD), representing the programme Cities Defending Human Rights.  Different human rights activists will talk about their experiences building peace. 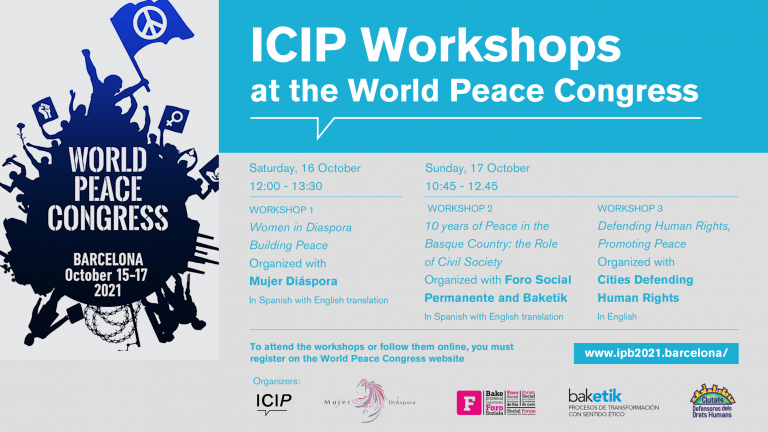 A concert and a tribute to Arcadi Oliveres

ICIP will also be leading the cultural part of the festival with a concert that will take place on Saturday afternoon in the Pati de les Dones of the CCCB (5.30 pm). Bigwé and the singer Memi Sillah and her band will play some music.

Before the music, the peace organizations of Catalonia will pay tribute to the activist Arcadi Oliveres, who died on April 6. The event will remember this key figure for the Catalan peace movement.

Workshops during the Congress

Women in the diaspora building peace

Ten years of peace in the Basque Country: The role of civil society