Creeping Militarism: A Critical Challenge to Gender Justice and Peace 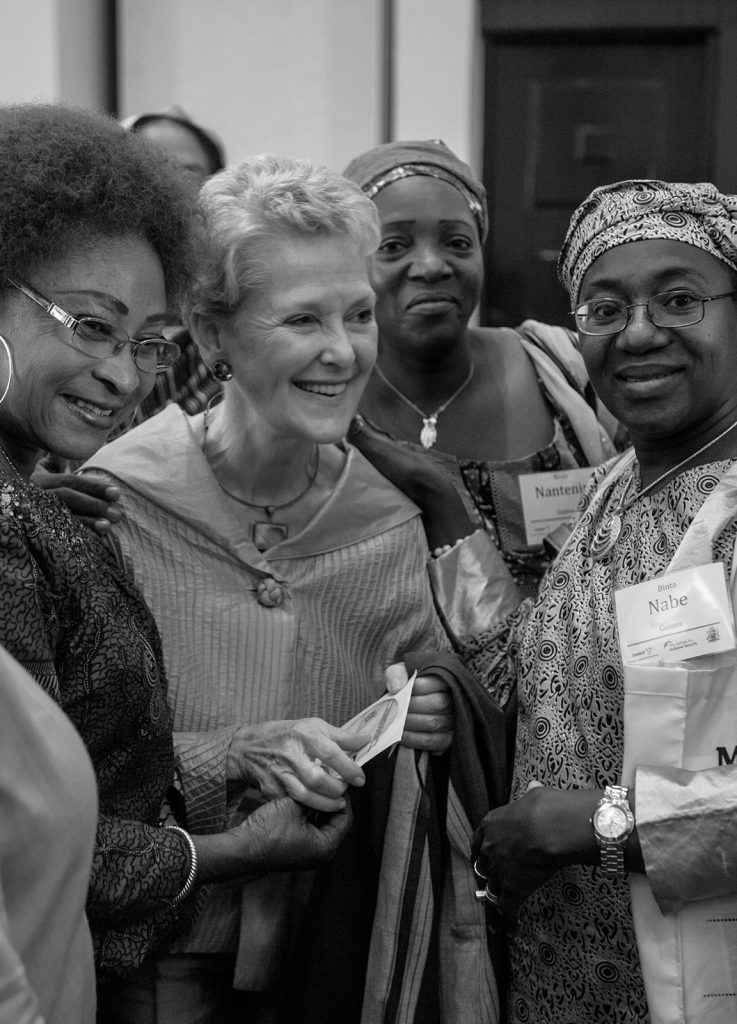 On 11-13 January 2014, 50 diverse Syrian women devised a peace plan to end the conflict in Syria. None of the men who participated as part of the official peace negotiations came up with such a plan. Yet it was the men with guns — rather than the women peace leaders — who were provided with access, hotels, meeting space, and political and media recognition to the Geneva II peace talks. And it was the men with guns who failed.

Almost two years later, over 220,000 Syrians have been killed; more than half displaced from their homes; and the Syrian situation is now being called the worst humanitarian crisis of our time. How can we take action to address this please and hold the international community accountable for commitments on the Women, Peace and Security agenda? The Syrian case illustrates both opportunities for transformative change in progressive women’s voices, and also continued and emerging challenges for effectively realizing women’s participation, protection, and rights across the conflict spectrum.

Yet, we still have not created the world of peace and gender justice that we envisioned. The old challenges remain the same: how can we go beyond paper to move from commitments to accomplishments? How can we move beyond incremental progress in a world where women’s rights and peace are always seen as secondary to men’s priorities and military security? How can we overcome key obstacles including lack of political will, ad hoc systematization, and voluntary, shoestring financing?

The most dangerous obstacle is that militarism is spreading. Terrorism and countering violent extremism are giving new justifications to military responses to conflict. They are providing new cover for prioritizing investment in economies of war over economies of peace. New forms of militarized spaces justify bombing towns in the name of combating terrorist threats, while we fail to do what is needed to demand a political solution to the conflict and humanitarian crisis in Syria. Meanwhile political space for civil society actors – who are key to promoting peace and gender justice and eliminating violence of many forms – are becoming each day more curtailed.

Where do we go from here?

When will we go beyond the medieval narrative of masculine heroes and feminine victims, to make decisions based on evidence rather than stereotypes? When will we create a new normal – one that cultivates women’s rights and voices and prioritizes comprehensive long-term investment in just and resilient communities over “quick fixes” that fail again and again?

Reactive military responses to terrorism and countering violent extremism assume both old and new security challenges have nothing to do with gender. In doing so, these responses recreate the failed and patriarchal status quo. Moving forward requires addressing key obstacles around political will, operational mechanisms, and financing:

First and foremost, moving forward requires taking women’s rights off the back burner and prioritizing gender equality as an issue of primary importance. This means women’s participation and rights can no longer be an issue of personal preference rather than obligation.

So far, this has not been the case. In the case of Syria, this was particularly evident with the former Special Envoy, Lakhdar Brahimi. Brahimi gave lip service to women’s participation and rights when presented with the peace proposal developed by Syrian women in 2014. Yet he literally walked out of the room without even providing an excuse during a high level Geneva meeting oriented around amplifying the voices of Syrian women and ensuring their inclusion in the planning for peace processes. Not much of an assurance of women’s political inclusion!

This is not an issue that affects only Middle Eastern men. In New York, we see the same pattern: after months of preparations, in September 2015 Spain changed the 15th annual Women, Peace and Security debate from the originally scheduled October 22nd to October 13th — 10 days earlier at than planned. They prioritized the presence of Prime Minister Mariano Rajoy over the voices of women worldwide, who have been key to creating and continue to be key to implementing the Women, peace and Security agenda in local communities. What better example of patriarchal systems in action?

No individual man should have his personal preferences count for more than women’s participation and rights. But moving away from this as the default requires changing institutional processes away from militarized blinders and toward creative and flexible learning systems that iteratively push toward gender equitable processes and outcomes from personal to international levels.

While commitments in principle have moved forward, their translation into practice has not – many times due to lack of integration into systemic processes. For example, when Syrian women demanded years ago to be included at the peace table, it threw the system into confusion, as it had simply not been considered. The obvious questions as to modalities were unexplored. Does “women at the table” mean a couple of token women being added to each militarized side? Does it mean building a women’s party – separate from the main opposing sides – such as in the case with Ireland? Does it mean creating a consultative body for women-led civil society? Does it mean having gender experts to provide input into mediation white papers? And where should these women be — at the table? in the audience? in a separate room? a separate building? a separate city? Failure to have standard but flexible mechanisms to work through and prioritize these options in a way that prioritizes women’s participation and rights provides yet another form of inertia in moving away from militarized solutions toward gender equitable change.

Moving forward requires creating alternative and gender equitable mechanisms and standard operating procedures that support gender equality and overturn outdated and failed models of ‘business as usual that assumes as functional the dictum of military security as equivalent to peace.

Implementation of Women, Peace and Security commitments is also hindered by the embarrassing level of financing allocated to realizing this agenda. While globally we invest $1.7 trillion in militaries and weapons, there never seems to be enough money for women’s rights or peace. Recently, as part of a push for strengthened member state commitments on implementing the Women, Peace and Security agenda, UN Women brought attention to the fact that only about two percent of aid addressing peace and security issues is allocated to gender equality. Two percent! They then campaigned to raise this to meet the UN’s Strategic Results Framework on Women, Peace and Security, which had as its 2014 target dedicating 15 percent of such funding to gender equality.

Both of these are a far cry from the 50 percent that seems at least arguable under the (1979) Convention of the Elimination of All Forms of Discrimination Against Women (CEDAW). Yet even a small increase would help: a mere one percent of the global arms trade ($8.8 billion) would ensure universal public education for girls and boys. In addition to raising the numbers, we need to change our priorities for investment: Scholars have recently demonstrated that feminist movements are the number one predictor of reducing violence against women. Where does that leave us? We need to move the money and invest in feminist movements for violence prevention and peace.

Implementation of Women, Peace and Security commitments is hindered by the embarrassing level of financing allocated to realizing this agenda.

Following the development of a peace plan some of the same women met with the Security Council in a historic Arria formula meeting on 17 January 2015. Here, one speaker made a passionate plea: “Do not leave these resolutions in a drawer. They are your resolutions, not our resolutions.” At the 15th anniversary of UN Security Council Resolution 1325, it is critical to recognize the militarism creep and prevent it from lulling us into allowing the failed status quo to continue.

1. This article was written before the approval of UN Resolution 2242. So, now, there are actually eight thematic resolutions on Women, Peace and Security.