Nicosia, the last divided capital in the world 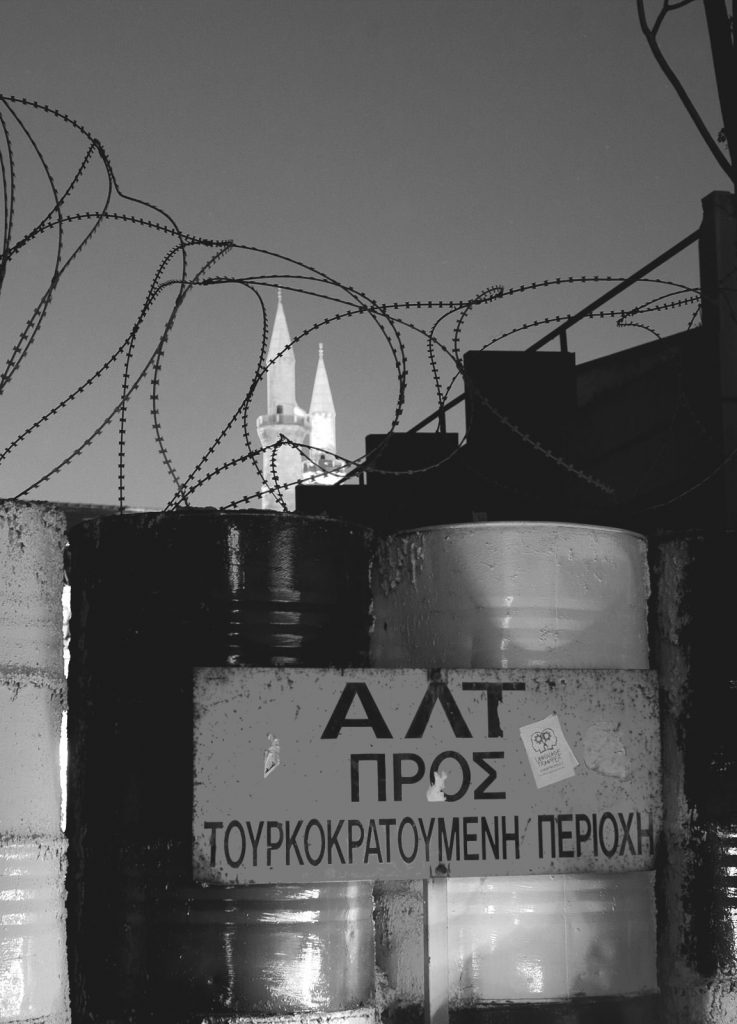 In the small hours of 30 December 1963, British General Peter Young took a green pencil and drew a line on the map of Nicosia, from one end of the city’s ancient Venetian walls to the other. His aim was to stop the fighting between the two communities that in just one month had left over a hundred dead, most of them Turkish Cypriots, in the old streets of Nicosia. That thin green line — a provisional buffer zone of at most a dozen metres wide — would become the border that has divided the city between the Turkish Cypriot Lefkoşa in the north and the Greek Cypriot Lefkosia in the south for more than 50 years.

After the Turkish invasion of Cyprus in the summer of 1974, this zone was extended to cross the entire island, becoming about 180 kilometres long. Between 5 and 20 August 1974, Turkish troops carried out the second part of their operation and occupied the northern part of the island. 180,000 people, a third of the Greek Cypriot population, were forced to leave their homes in Kyrenia, Famagosta and other occupied areas and go to the southern part. At the same time, some 40,000 Turkish Cypriots moved from the south of the island, in Greek hands, to the Turkish occupied north. In the end this double exodus would leave more than 4,000 people dead in the clashes. A further 494 Turkish Cypriots and 1,464 Greek Cypriots were forcibly disappeared. Their fate would not be known for years.

Today the old part of the city is a maze of cafes, tourist shops and gardens with palm trees. Only the high walls surrounded by barbed wire that rudely cut through the quiet streets remind us that those few square kilometres are one of the most militarised borders areas in the world. 12,000 soldiers of the Greek Cypriot National Guard, entrenched in dilapidated old sentry posts, control the southern part of the border. In front of them, more than 40,000 soldiers of the Turkish contingent do the same on the northern border. From the top of turrets flying the Turkish flag, they defend the self-proclaimed Turkish Republic of Northern Cyprus (TRNC), an entity whose international recognition is limited to Turkey itself.

In between, jealously watched by both armies, lies a narrow strip of broken paths and ruined houses. A few sun bleached shop signs are witness to the fact that this was the commercial heart of the city. It is now a no man’s land where the colourless monotony of the faded walls and the rusting metal is broken only by the blue of the UN peacekeepers’ helmets. Access to this Dead Zone is in fact the exclusive responsibility of the UN peacekeepers. The UNFICYP mission, a thousand soldiers deployed along the ceasefire line, has been renewed every six months since 1964 and has an annual cost of over 53 million Euros. The former UN Secretary-General Kofi Annan described it in 2004 as the biggest failure of the United Nations.

The borders were hermetically sealed until 2003, when the then president of the TRNC, Rauf Denktash, decided to open a border post close to the Ledra Palace, the headquarters of the UN contingent. Over recent years another 8 checkpoints have been opened across the island, including one in Ledra Street, the main thoroughfare of the old town of Nicosia. However, according to a study by the research group “Conflict in Cities”, a third of the population of either side have never crossed the border, and most of those who have, have done so only once or twice.

Negotiations between Greek Cypriot politicians and representatives of the north have continued over decades. But they have consistently failed, often for trivial reasons. The memory remains from the 1980s when, in a break in one of their bilateral meetings, a TRNC general asked for a Turkish coffee. His Greek Cypriot counterpart replied that that was impossible, they only had Greek coffee. The agreements they had reached were blown to bits. The same happened in 2004, when the majority of Greek Cypriots voted ‘no’ in the referendum on the Annan Plan, rejecting the former UN leader’s proposal to establish a bi-communal and bi-zonal federal republic. Previously, 65% of Turkish Cypriots had voted in favour, but it was necessary for both communities to endorse it.

Negotiations between Greek Cypriot and Turkish Cypriot politicians have continued over decades; but they have consistently failed

There are three main stumbling blocks which have always led to deadlock in the negotiations. The first is the status of the Anatolian immigrants who have moved to the north of the island, under the auspices of Turkey, over the last 40 years. The second concerns the military presence on the island. And finally the restitution of, or compensation for, properties that Greek Cypriots and Turkish Cypriots owned on the other side of the island, before they were displaced. This issue has been considered several times in the European Court of Human Rights.

In recent months negotiations have been resumed between the two presidents, Anastasiadis and Akıncı. On 10 September 2015, religious and political leaders came together for the first time to support peace in Cyprus. Various agreements have also been reached, such as the interconnection of the electricity networks between the two parts of the island; a higher degree of interoperability of mobile phones across the Green Line; reducing interference in radio frequencies; or the creation of a commission on gender equality, which comes on top of those that already exist for economy and culture. Despite these encouraging steps, analysts believe that the predictions of a completion of negotiations in January are excessively optimistic. They foresee, with all the political difficulties involved, a new referendum in March 2016. Furthermore, it seems more likely that the negotiating process will continue after the parliamentary elections in the Republic of Cyprus, which are expected for next May.

“A divided city is like a person who is missing an arm, a leg, an eye. There’s something missing”, I was told by Lellos Demetriades, who was mayor of the Greek Cypriot side of Nicosia for 30 years, until 2001, and one of the main promoters of reunification. “However — he added, looking out from the windows of his office, from where you can see across the whole city — I don’t think you can keep cities divided forever. Man is a social animal and this place is too small to have two capitals.”