Drones: who wants what and why? 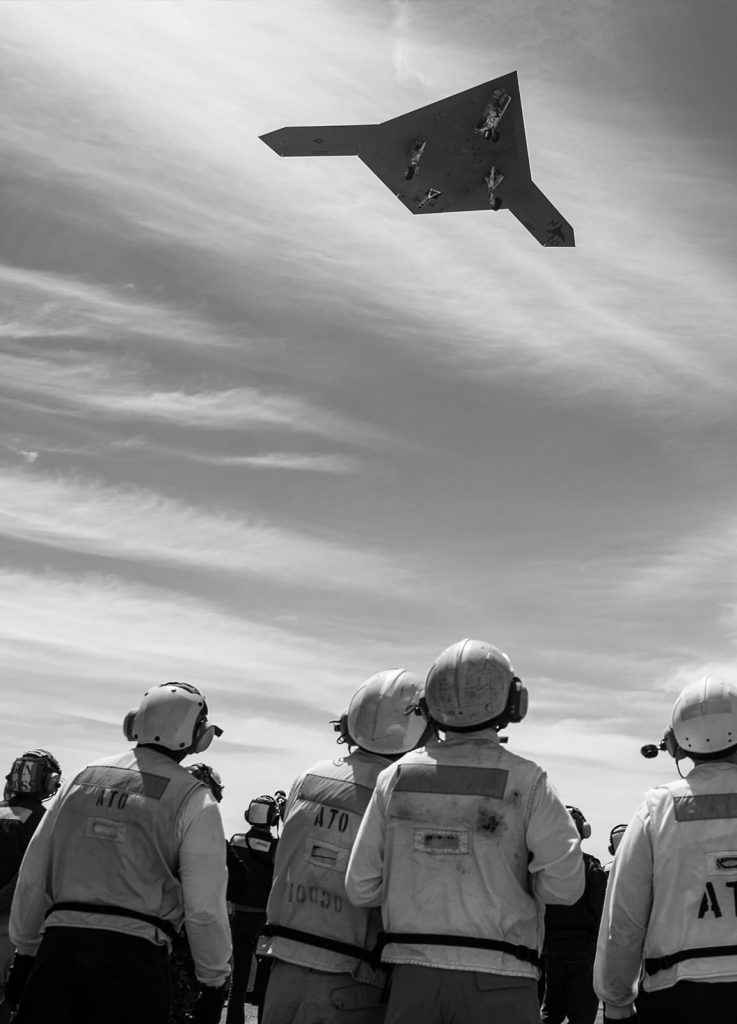 Drones, needless to say, have become what is known as a Trending Topic, but behind their apparent novelty, there are some aspects that really aren’t that novel. Who wants them and to do what? This is the all-important question, and to answer it, we must first take a look at what drones are and what they are not and at the cruxes of the debates revolving around this technologic phenomenon. Thus, 10 quick considerations.

1.- What is a drone? It is in fact an aerial vehicle, an engine that flies without any human being flying it (as in physically inside the device). This is why it is technically named as “unmanned aerial vehicle”. But there is no doubt, as of today, that someone is controlling it, in charge of it. Ah, some people say, it can be controlled by a computer program! Nonetheless, this program was also made by someone, and so on. The first point is important: no matter how much technology is used in drones –regardless of the degree of malice– ultimately, today, a key factor remains when deciding how to use them: the human factor. That is, someone is taking a series of decisions, and, as will be seen later down the line, someone (individuals, not only legal bodies or ‘technology parks’), whether he or she likes it or not, is responsible. This triggers, inter alia, highly important legal consequences.

2.- To clarify what a drone is and what it is not, we must remember that it is not only or exclusively a weapon of war. It is simply a flying thing without anyone on board that is controlled according to instructions and parameters that someone is managing from the ground. There are drones not used for military purposes which serve a civil function, such as monitoring traffic or crops or giving support to sports broadcasts on television or other media. They can also be just another gadget: rumour has it that a company selling books, DVDs and other things online intends to deliver products using drones. Aspects including cost and air safety issues will need to be examined.

3.- But even in their non-military uses, it is true that the use of drones by those in government (that are not military) must take into account a wide range of potential uses (some of which are mentioned here, but there are more) that require legal clarifications: for example, how can all this affect certain fundamental rights like the right to privacy and the right to intimacy and self-image? And it’s not enough to say, ‘But privacy is over! It’s naïve to press the issue, etc.’. This debate should in no way be over. However, it is true that recent years have brought some crucial security challenges to our democratic societies. And this is not only referring to 9/11, Atocha 2004, London 2005, etc., but to the fight against organised crime, drug trafficking and human trafficking (mafias responsible for migratory flows with tragic consequences in Malta, Lampedusa and other places).

4.- Hence, in this regard, drones (used for non-military purposes) do not raise a radically new issue, but rather readdress an issue on a qualitatively new and more complicated scale, even though it is just another scenario of the delicate balance between fundamental rights and policies on security, public order, etc. Some think that we shouldn’t expect great new ideas in this realm, because this issue has already been addressed in society with the installation of surveillance cameras in public thoroughfares, airports, and railway and metro stations. A balance that must be fine-tuned which involves lawmakers, pro-fundamental-rights movements, the media and other social and political players. But under no circumstances should the debate boil down to positions that are as radical as they are simplistic: from the ‘total security’ championed by the NSA and many governments to the ‘no control of any kind, ever, of citizens’. Everyone needs to assume their responsibility in this debate.

Drones are not as new as they’re presented, but they seem like it, because that’s what suits politicians, the military and powerful private corporate industry.

5.- That said, we can now move on to the specific case of drones used for military purposes. It should also be noted here that there are two kinds, which in summary are: drones as an explicit weapon of attack and drones with complementary or “secondary” military uses. The latter case is easier to address, as it has to do with aerial vehicles used for surveillance, image capture, and reconnaissance. Undoubtedly, the data collected and transmitted can later be used for military action, but to the same extent as that collected by aircraft used for the same purposes, such as AWACS and others. Instead, we must focus a bit on the use of drones as a weapon of war in the strictest sense, which puts them on a par with bomber, fighter and attack aircraft and with the use of missiles or different artillery. In other words, a weapon that kills, period.

6.- Some sources date the military use of drones as weapons directly for attack to 2001, to the war in Afghanistan, and it is estimated that some 40 states now have drones or have decided to get them in the short term (and they are able to do so financially and technically). This decade, and this may define one of the changes in the new century and in the new millennium, will be the decade of trying to keep doing the same old thing ―wars― with new or relatively new means in order to enhance the effectiveness of one’s own actions and weaken those of the opponent. Other experts can specify the data, but here we could take the opportunity to point out that, with respect to the United States, although drones went hand in hand with the two terms of George Bush Jr. (particularly in Afghanistan and its eastern border), with Barack Obama drone use has risen substantially (in terms of quantity, of the number of civilian casualties caused, etc.) and has been extended to other scenarios (Pakistan, Yemen and even Somalia). As a result, from 2004 to 2013, drones killed 3,460 people in Pakistan alone, at least 35% of which can only be described as ‘innocent civilians’, according to Pakistani sources (which have their own criteria for these cases on who is and who is not “civilian”).

7.- This happens for several reasons in this logic of doing the same old thing in an innovative or supposedly innovative way. As for the military reasons, the logic is rooted in two ideas. The first is that, according to the above-mentioned cases (Afghanistan, Pakistan, Yemen and Somalia), drones are theoretically used so that troops do not have to be put on the ground to enter and occupy the land and search for and pursue the enemy, with results that are in theory more efficient. But there is a simple equation behind it: fewer casualties of one’s own (zero casualties if possible) and maximisation of enemy casualties. It would be unfair to say that the United States is the sole protagonist of this strategy. Some time ago, in fact before the United States made them part of its strategy, Israel’s armed and security forces already integrated these many uses of drones: especially to watch, follow, identify and conduct (or help to conduct) deadly attacks with other means like air-to-ground missiles in places like Gaza and areas of the West Bank.

The second idea behind the military logic is complementary. It’s about selling the idea that the more technology involved, the ‘cleaner’ the war. This ‘clean war’ theory does not only suit the military (after all, they simply do what they’re told and moreover assume the consequences much more directly). It also aims to ensure that the enlistment military rate doesn’t fall, because countries that have to be a ‘world power’ need large armed forces, but they no longer have ‘compulsory military service’ or “draft” and recruitment is a serious problem. In the Korean and Vietnam wars, the United States lost tens of thousands of soldiers (nearly 60,000 in Vietnam alone!), but at the time of the wars of the 21st century (Iraq and Afghanistan essentially), 1,000 casualties is a socially unacceptable figure, as polls suggest. This ‘clean war’ logic is used to make war more socially acceptable, to give members of the armed forces a heightened sense of security and to prevent the ‘combat fatigue’ caused by battle in a long war (remember the case of Vietnam, for instance).

The use of drones responds to a simple equation: fewer casualties of one’s own soldiers and maximisation of enemy casualties. And it’s also about selling the idea that the more technology involved, the ‘cleaner’ the war.

8.- Here the line of responsibility is clearly shifted to another level, from decision makers to public institutions ― the political class, the politicians. In this sense, the arguments in the preceding paragraph grow exponentially in importance. The governments that engage in armed conflicts and respond to the logic of the rule of law (with all the disadvantages you can think of) have to do so under strong constraints typical of the ‘opinion society’: elections, polls, the weight of the media, social networks, etc. All this causes ‘the decision’ to be highly conditioned by heterogeneous factors that are neither compatible nor rational. And in this regard, politicians take decisions that respond to a wide range of reasons, but we mustn’t confuse this with the discourse of legitimisation that accompanies everything and seeks to justify to the public things that often make no sense. It is the famous dictatorship of the storyboard or, in other words, the dictatorship of media advisors, public policy makers or PR staff.

9.- An added complication, and the case of the United States is astounding in this sense, is that sometimes those who take decisions (or play an important role in the process) don’t have and have never had military experience, let alone combat experience. This means that sometimes the highest ranking officers have looked with suspicion (or direct contempt) upon great ‘desktop warriors’ like Rumsfeld and Wolfowitz whose ‘strategic decisions’ caused disasters of well-known proportions. And that, in the end, makes it so the military cedes or is dragged into any new ‘doctrine’ which, to some extent well accompanied by the right technological discourse, makes the decision to go to war less costly for them and for their soldiers. The issue is that simple and unsophisticated.

From 2004 to 2013, drones killed 3,460 people in Pakistan alone, at least 35% of which can only be described as ‘innocent civilians’, according to Pakistani sources.

10.- In conclusion, drones are not in fact that new, even though some authors present them as if they were an authentic ‘revolution in military affairs’. But they seem like it and they will continue to seem like it, because that’s what suits politicians, the military and, especially, the powerful private corporate industry that depends on it and which, in a more rustic version, was denounced by General Eisenhower in the fifties… You will also hear ―in fact things have already been published in this regard― that drones will soon programme themselves, they will be ‘self’ controlled (Without software? Impossible! And if there’s software, who makes it?), they will choose targets, blah blah blah… and we’ll be in the age of ‘robots that kill’ without any human element involved. Call me stupid, but I don’t believe it, nor do I see it in any plausible future. Moreover, while we’re at it, this argument seems to play in favour of this idea: ‘Cheer up, we’ll soon have a generation of drones and other devices that will finally and definitely allow us to avoid without a shadow of a doubt any type of criminal liability related to the law of war and to international humanitarian law!’. And here’s where it would land us.