The truth of women 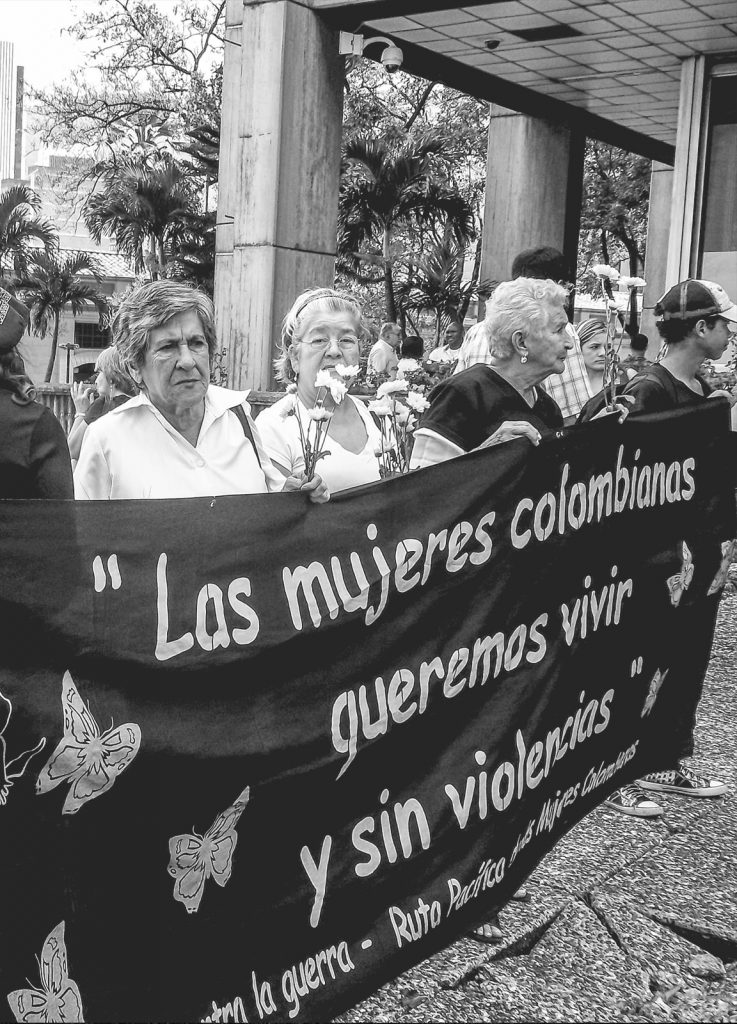 La verdad de las mujeres. Víctimas del conflicto armado en Colombia (“The Truth of Women. Victims of the Armed Conflict in Colombia”) is the title of the final report of the Colombian Women’s Truth and Memory Commission (CVMMC), which was recently presented in Bogotá. This report contains the voices of over a thousand women who gave testimony in order to expose their experience in a war that has been going on for more than fifty years, and to help create a collective truth narrated by women and shared by the Colombian society it is addressed to.

In 2010, the Ruta Pacífica de las Mujeres Colombianas launched a project that seemed very difficult to carry out: to compile the memory and truth of Colombian women who had been victims of human rights violations in the context of an armed conflict. The challenges were, first of all, to carry out this project in a country that is still at war, and secondly, to do so with the means available to a social grassroots movement.

The Ruta Pacífica is a network made up of 389 groups of women associated with the movement for feminism, peace and human rights, or at the community level. It was created in 1996 following marches in support of women in the areas most affected by the violence of the armed actors. Since its inception it has worked for a negotiated end to the armed conflict in Colombia and to put an end to the impunity of those who perpetrate violence against women. The Ruta Pacífica is a grassroots movement that is present in nine Colombian regions and is characterized by its commitment to giving support to women who contact them, as well as its capacity to mobilize its bases of support and make political proposals based on the experience of women. Additionally, the Ruta’s marches are known for the richness of the symbolic language they use and for their creativity.

The two challenges mentioned above have been transformed into elements that make the project unique. The experience gained as a women’s movement has given the Ruta Pacífica the ability to protect itself, and to protect and accompany the women who testified in a country where human rights are not guaranteed. This means not putting them at risk during the interviews and assisting them with counseling and psychosocial support, when needed, throughout the process. Furthermore, the mobilized human resources have always been internal; in other words, women of the Ruta Pacífica themselves have documented, transcribed and codified the testimonies, and written the final report, with occasional external advice and support. This has led to an innovative project of Investigation – Action – Participation which offers food for thought to future Commissions that may consider working with the truth and memory of women.

Women have become military targets in the armed conflict in Colombia because of their capacity for resistance, their persistence in building and rebuilding conditions of humanity, and their tenacity in the defense of loved ones

The work of the CVMMC has benefited from the organizational capacity and the efforts to learn and participate in training of the women of the Ruta Pacífica. Over eighty people have participated in the development of the project: among others, 36 documenters, 10 digitizers, 7 codifiers and systematizers, and 8 researchers (i).

The work was carried out in several stages: the initial training workshops for the women who had to take testimony from other women; the coordination of planning by regions, the conduct of around 100 interviews – which resulted in a voice recording and a file – and their transcription; the subsequent centralization of all the information in order to codify it with the ATLAS.ti program and process it statistically; and the final task of writing the report based on the compiled testimonies.

A key factor that has made the CVMMC possible has been the trust present at every stage and area of the project: trust among the women who accepted the challenge of carrying out this project; trust in the Ruta Pacífica on the part of the women who gave their testimony; and trust created during the interviews, which made it possible for the words of women who had been silenced for so long to finally emerge.

Another equally important aspect has been the commitment to support all the women involved and provide them with tools to deal with the traumas experienced while working on various phases of the process with testimonies. This healing work has been carried out in each region and in a large gathering held to develop and reflect on the work done and the experience of carrying it out.

Colombian women demand Truth and Justice, an end to impunity. They also demand the demilitarization of life and territories and access to education, health care and jobs: the best antidote to violence

The CVMMC has generated two documents: Memoria para la vida (“Memory for Life”), about the methodology used; and the report La verdad de las Mujeres. Víctimas del conflicto armado en Colombia (“The Truth of Women. Victims of the Armed Conflict in Colombia”), published in two volumes. Following an introductory chapter outlining the general framework of the study, the first volume contains the testimonies, analyzed both quantitatively and qualitatively, and organized in large sections that refer to the consequences that the acts of violence had on the lives of the women interviewed and the traumas they experienced. Apart from the dimension and depth of the harm received, the report contains the women’s accounts of how they confronted these events; what they did to survive and overcome serious human rights violations. The second volume presents the acts of violence related by the women, the nine group cases, and compiles their demands for reparation.

The report therefore offers a factual truth and a narrative truth. The factual truth has to do with what happened, to whom, where, when, how and who was involved. This truth that attempts to capture the contexts, the causes, the patterns and the impacts of the violence drives home the nature and magnitude of the events, and also sustains complaint procedures. The narrative truth, on the other hand, has to do with the subjective experience and the meanings we attribute to it. This experiential truth provides knowledge about personal stories, about beliefs and values, about the impact and resistance of women.

It is clear from the testimonies that women have become military targets in the Colombian armed conflict; a conflict that revolves around the control of territory and natural resources, which has resulted in the militarization of people’s lives or their expulsion. Because of their capacity for resistance, their persistence in building and rebuilding conditions of humanity, and their tenacity in the defense of loved ones, women become an obstacle for the armed actors. Violence against women in this context takes on very different forms, from threats (49.46%), psychological torture (54.40%) or physical torture (15%), to forced displacement (76.20%) or sexual violence (13.20%).

However, the testimonies also allude to prior violence in settings outside the conflict, which refers us to the existence of a continuum of violence in the life and experience of women. Sexual violence is an example: while 13.20% of women state they were subjected to sexual violence in the context of war, 15.20% declare they were victims within their own family or community. The report therefore confirms that, for a woman, violence isn’t over when the war is over because the origin of violence against women has to do with the dominant relationship of men over women in the patriarchy that normalizes it in every area and at every moment.

While the report confirms the scope and seriousness of violence against women, it also provides in-depth knowledge of its impact on the lives and bodies of the women interviewed, underlining the unity and corporeality of the feminine experience. In other words, the traumatic effects of direct violence, of losses and of the disruption of their own lives circulate and connect to one another giving rise to illnesses, altered perceptions of their own bodies, sexual distortions, and disturbed personal and community relationships.

Nevertheless, the women interviewed have survived violence and their testimonies also relate how they coped with the traumatic events and learned to live with the losses and damages. In their narratives, they explain that the driving force behind their resistance and ability to pull together were the bonds with loved ones, mainly their children. In the name of these bonds, they confronted the armed actors, designed protection strategies and were willing to lose everything in the displacement or escape in order to save their lives and those of others. The responsibility they had assumed for people who depended on them also helped sustain their determination to build and rebuild conditions of humanity in order to live a dignified life.

Regarding demands for reparations, what is heard most often in the testimonies is the feeling of irreparability of the damage suffered, but at the same time, the need to look ahead to the future in the name of personal dreams and, once again, of their children. The women demand Truth and Justice; they want an end to impunity. They also especially demand the demilitarization of life and territories, and access to education, health care and jobs. For them, these opportunities to improve people’s lives are the best antidote to violence.

In other words, the Colombian women who gave their testimony to the CVMMC demand the construction of a positive peace which is not limited to the end of the armed struggle, but also makes progress in terms of a greater justice for the people who are to experience it.