Sport and the Reintegration and Social Inclusion of Former Child Soldiers 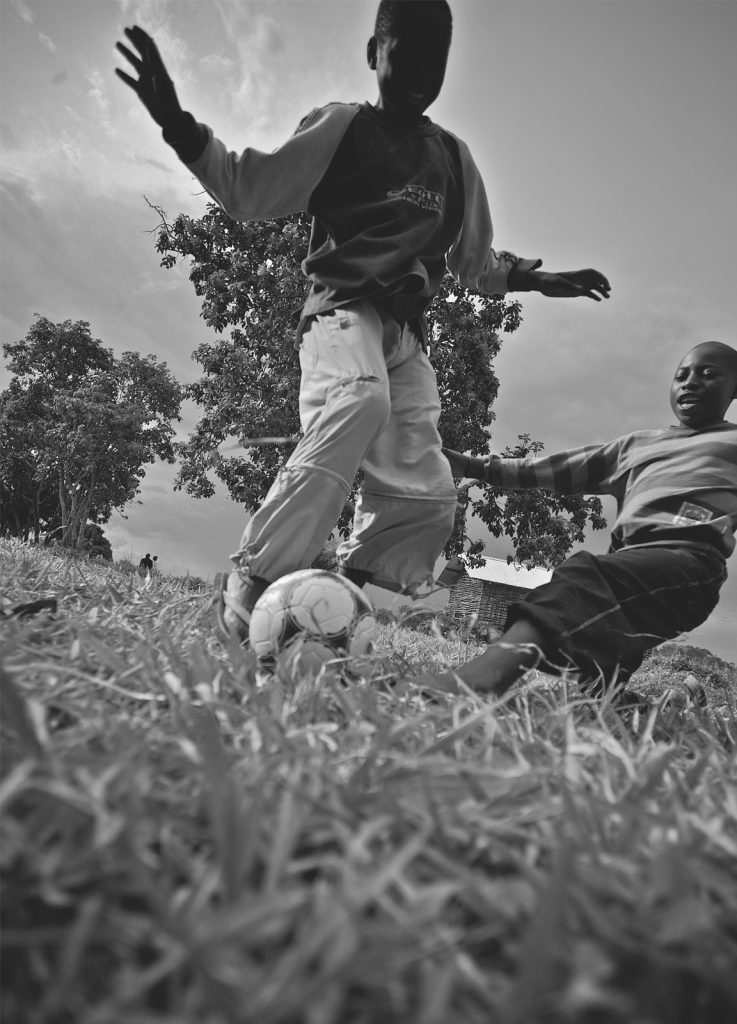 Wars are dramatically altering the lives of children around the world. It is currently estimated that tens of thousands of children are involved in armed conflict in government forces or non-state armed groups in all regions of the world. The ongoing presence of child soldiers in conflicts from the Central African Republic and South Sudan to Myanmar and Yemen is a testament to this fact. Children are often recruited and join armed forces within failed states where a lack of access to economic and educational opportunities is prevalent and within breakdowns of society and traditional protective structures. While other armed groups use the forcible abduction of children to bolster their fighting forces. Either way, child soldiers face extreme war-related exposures that pose significant threats to their psychological and emotional well-being.  International laws such as the Optional Protocol (2002) to the Convention on the Rights of the Child (1989) 1 and the Paris Principles on Children Associated with Armed Forces or Armed Groups (2007) 2 prohibit governments and non-state armed groups from using children under the age of eighteen in armed conflicts. Despite these international standards, the practice of child soldiering still exists.

Sport continues to be seen as a formidable component of reintegration programs for former child soldiers. Interim care centers – a stopping point for many former child soldiers prior to reintegration prior to family re-unification – often utilize sport as one component of psycho-social support programs for returnees. Here, sport provides them with the intellectual and emotional stimulation that is provided by structured group activities and offers them an opportunity to apply socially-acceptable and structured patterns of behaviors away from a social context in which violence is normalized, towards one in which working together as a team is recognized positively with the aim of transferring these behaviors upon return to a community context.

The re-introduction of former child soldiers back into the community is a difficult process and is sometimes unsuccessful. They experience complex layers of acceptance that need to be addressed upon return from fighting forces. My work with former child soldiers in Northern Uganda revealed they experienced varying levels of acceptance upon return home. Sport was found to be a catalyst for many to experience positive relationships by bringing individuals from a variety of children and youth together within inherently valuable shared interest activities leading to more expedient levels of social inclusion among their peers. Furthermore, sport offered former child soldiers a sense of belonging, to a team or program, provided opportunities for the development of valued capabilities, and created the opportunity to increase community capital, by extending social networks and increasing community cohesion.

Social inclusion springs from a complex ecology of individual traits and social forces. In many instances, a child who survived the conflict alive likely developed survival strategies to navigate a harsh and dangerous environment. Many of these young people, especially those who survived abuse, possess a sense of resourcefulness, which shows up in confidence and a sense that they can control their fate.  Such is the cases of Peter and Harriet 3, both formerly abducted for nearly two years by the Lord’s Resistance Army.  Each worked their way up to progressive levels of responsibility including organizing village raids and abductions (Peter) and overseeing groups of young females once abducted (Harriet). Upon return, they both faced the challenges of overcoming the stigma common to former child soldiers. While attending school, each was elected by their student peers sport prefect – a position of great responsibility towards the organization and management of school sport activities –demonstrating their successful transference of critical skills garnered while in captivity to that of a more socially-accepted context. Each utilized sport as a means to demonstrate confidence and control of their own fate as reintegrated former child soldiers.

It is important to acknowledge that sport activities are not a homogenous, standardized experience. Returnee’s experiences of the same activity will be subject to wide variations, as will the effects. This remains the case within the context of sport interventions for former child soldiers. Throughout the reintegration process, former child soldiers face a multitude of conflicts, making nonviolent conflict resolution a high priority in psycho-social support programs 4. Sports can teach children skills for handling conflict nonviolently rather than resorting to physical violence. The effect is, presumably, even greater once they return to their communities, and the effects of such influences as access, education, and peer and community relations.

Our community-based Peaceful Play 5 programme in Northern Uganda focused on resolving conflict that occurred during sport within communities where high rates of former child soldiers experienced provocation by their peers with the aim of transferring the conflict resolution skills to conflicts of low-intensity within their homes, school, and communities. Here, children and youth learned to use dialogue, refer to existing rules, and seek outside assistance when appropriate to resolve conflicts. Community-based sport coaches and school-based sport teachers noted the decrease in conflict-related behaviors and cited the increased abilities of youth to resolve their own conflicts peacefully without adult intervention.

However, participation in sport can have a destructive effect turning competitive contests into breeding grounds for conflict. It is here where participants provoke conflict-related behaviors out of former child soldiers in order to reinforce stereotypes of former child soldiers as unconditional threats to peace in a situation where communities strive to move forward from conflict. With appropriate guidance, former child soldiers learn to handle the conflicts through dialogue rather than fighting to overcome the stigma of the propensity for physical violence by providing opportunities to cement positive relationships through sport while overcoming any thoughts of returning to an armed group situation.

Despite the many uses of sport as a means of psycho-social support for the reintegration and social inclusion of former child soldiers, questions still remain. Does participation in sport foster long-term social inclusion? The answers might be found in longitudinal work related to critical culturally-contextual factors rather than perceived determinants to further understand the long-term holistic effects of sport on former child soldiers. The issue is not simply whether sports participation can be viewed as contributing to personal and community development, and the reduction of social exclusion of former child soldiers. Rather, the question relates to the nature of the contribution sport can make to a range of issues. It provides a useful dynamic that few structured activities are able to offer by providing an activity bound by pro-social behaviors congruent with successful reintegration. However, this should not preclude the need for wider, sustainable systems of protection and care to ensure the reintegration of young survivors of war.

1. UN General Assembly. Optional Protocol on the Involvement of Children in Armed Conflict, 25 May 2000.

3. The names Peter and Harriet are pseudonyms uses to protect the identity of the children involved in the research and fieldwork.