An end that is possible, necessary and inevitable

Jordi Armadans
Director of FundiPau and member of the ICAN Campaign 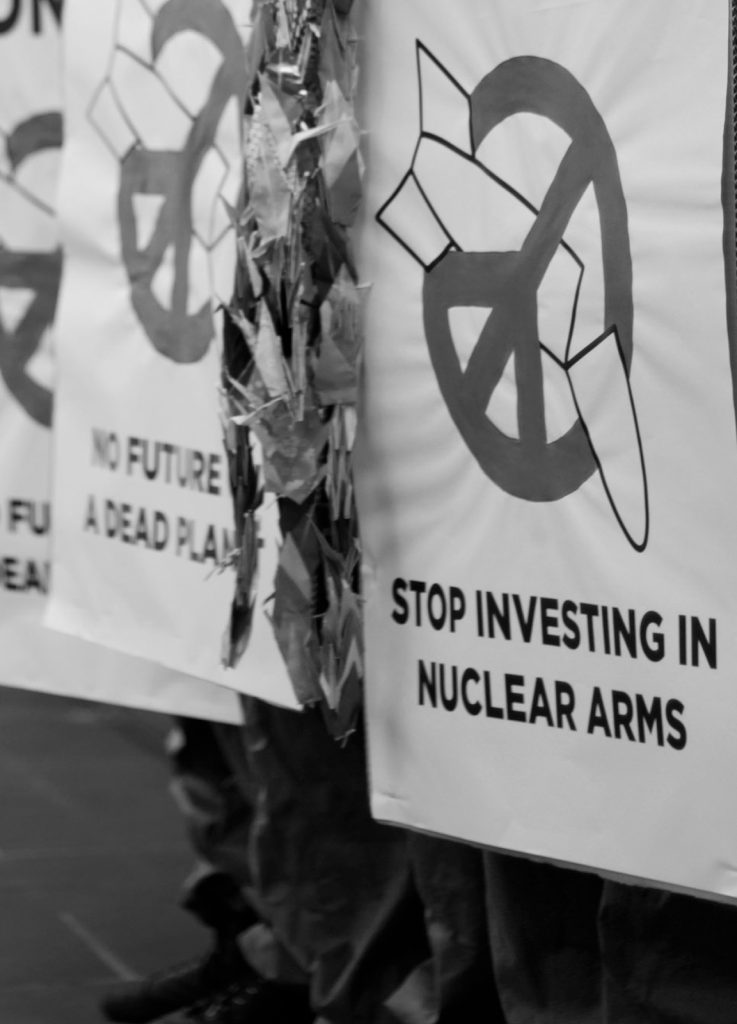 Both here at home and around the world we experienced an intense 2017, full of shocking and relevant news. Perhaps because of this and because of the low profile peace issues always seem to have, especially when they are of a positive nature, the fact that 2017 has been a very important year for the long and difficult – but inevitable – task of building and consolidating peace has gone unnoticed. When one day in the near future we achieve a world free of nuclear weapons, we will look back and identify a key year: 2017.

Achievements do not just happen. The struggle against nuclear weapons is a long-standing one; a very long-standing struggle. As a result of the terrible explosions of Hiroshima and Nagasaki, scientists, intellectuals, citizens and activists came forth and demanded that the world put an end to the suicidal madness of nuclear arms development.

Nevertheless, it took the end of the Cold War, a new international context, a new cycle of social mobilization and organizational and communicative experience accumulated by the campaigns against landmines and cluster bombs to work on a new approach. This new approach consisted of a new and young campaign (ICAN), launched in 2007; confirmed evidence – concern for the humanitarian disaster that an explosion of a nuclear weapon would cause today – and a well-defined strategy: to achieve a treaty based on the prohibition of nuclear weapons.

When one day in the near future we achieve a world free of nuclear weapons, we will look back and identify a key year: 2017

If the first obligation of any government is to protect their citizenry and promote their well-being, it is absolutely unwarranted to maintain the arsenal of nuclear weapons. In effect, states should work to abolish these weapons for good. And, incidentally, save the 100 thousand million dollars that are wasted every year just on the maintenance of existing arsenals.

This was understood by the United Nations when, after World War II and the traumatic experiences of the Hiroshima and Nagasaki bombs, it established the elimination of nuclear weapons as one of its priorities. The Non-Proliferation Treaty (NPT) of 1968 seemed to point very timidly towards this goal. But almost fifty years have gone by and it has been demonstrated that the NPT has consolidated – and legitimized – the privileged status of the nuclear powers. The nuclear powers, invoking the NPT, have been up in arms whenever another country wanted to obtain nuclear weapons. But they have forgotten about the NPT when it came to advancing towards their own nuclear disarmament.

An unacceptable impact: that of nuclear weapons

Because it happened and it is well documented, the world knows the tragic humanitarian impact of the nuclear bombs of Hiroshima and Nagasaki. But the world, or at least many people, ignore that today we have almost 15,000 nuclear weapons and that several nuclear powers (both official and unofficial) are working to modernize and expand their arsenals. And fortunately, because it hasn’t been attempted, the world ignores the terrible devastation that the use of a nuclear weapon would involve today, let alone a nuclear war. The nuclear weapons of today obviously have a much higher capacity for destruction than the nuclear weapons we know. That is why numerous humanitarian organizations warn that we would not be able to cope with the serious impacts the explosion (intentional or accidental) of a nuclear weapon would entail.

If the first obligation of any government is to protect their citizenry and promote their well-being, it is absolutely unwarranted to maintain the arsenal of nuclear weapons

We are not just talking about many deaths, but also of radioactive contamination, of the negative impacts on the environment (increasing the climate threats that we are already dealing with today) and agriculture (which would aggravate the situation of world poverty and malnutrition).

The determination of nuclear powers to maintain, above anything else, the absurd privilege of being able to destroy life jeopardizes the health and survival of our planet. That is why citizens, the scientific community, many countries, the ICAN campaign, the International Red Cross, Mayors for Peace, etc. could not remain indifferent. That is why, over the last ten years, they have mobilized in protest actions, analysis sessions, scientific reports, awareness-raising activities, advocacy campaigns and diplomatic forums warning about the serious humanitarian consequences of nuclear weapons and, as a result, demanding their prohibition.

Making progress when it does not seem possible

The campaign against nuclear weapons is one of the difficult ones. Obtaining the prohibition of landmines and cluster bombs was very difficult: overcoming social inertias and economic interests, and transforming reasons of state. But it is true that they were weapons that were not essential in the defense policies of the countries that had them. Obtaining a ban on nuclear weapons, the most cruel and indiscriminate weapons that exist, is a much bigger challenge. Much resistance has had to be overcome. Nevertheless, in July 2017, 122 countries approved the Treaty on the Prohibition of Nuclear Weapons and in September it opened for signature and ratification (today there are 56 signatory countries and five ratifications). We estimate that by the end of 2018 the Treaty will have enough ratifications (fifty) to enter into force.

Admittedly, the nuclear powers are missing. Does that make the agreement reached unfeasible or insignificant? Absolutely not. It is the first serious step that allows us to envisage a world without nuclear weapons. And it is the first step, determined and courageous, that confuses and troubles the nuclear powers. Whenever they did not want to move forward, they would veto and prevent any progress. But they have not known how nor have they been able to avoid the birth of this Treaty. For the first time in the history of nuclear weapons, hope and reason have trumped fear and inertia.

Also, here at home, we have been able to confirm that even the most difficult things can be changed. Of all the campaigns of disarmament and arms control promoted from Catalonia and Spain, this one seemed the most difficult: the one with the least impact, the least support and the least interest. Nevertheless, and in spite of the current political situation, the scientific community, citizens, the Barcelona City Council, the Parliament of Catalonia, and the Spanish Congress have called on Spain to follow the road to nuclear disarmament. At the moment, the Spanish Government – like all other NATO countries and nuclear powers – has refused to join the wave of change. But today they are alone. And it is necessary for citizens to send them a message, loud and clear: a safe world is incompatible with the irresponsibility of maintaining an arsenal of destruction such as the arsenal of nuclear weapons.

Because, as the director of ICAN Beatrice Fihn said in Oslo in December: “The end is inevitable. But will that end be the end of nuclear weapons or the end of us? We must choose one.”