The triumph of nonviolence: the evolution of activism in Catalonia 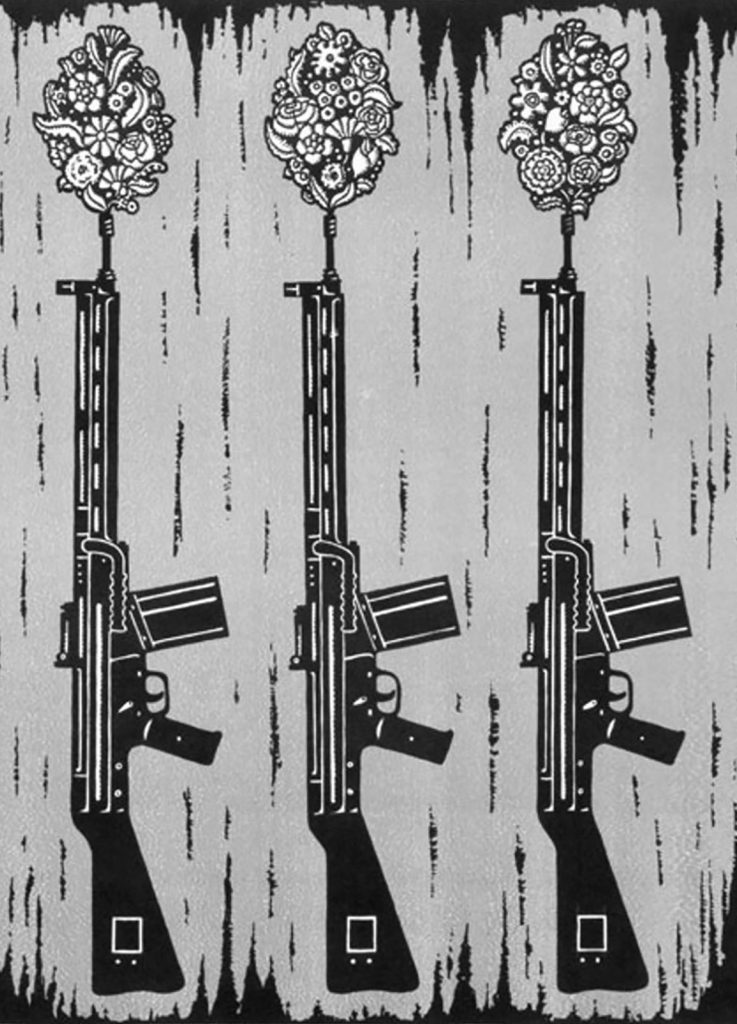 The military service young people had to fulfil during the sixties, under the Francoist dictatorship, was understood by some of them as an opportunity to receive training in the use of weaponry. It is significant that some of these youngsters who thought this way were activists or travel companions of clandestine political organisations operating against Franco’s regime. This understanding was the result of the fact that it was clear for them that a way out of Francoism could, at some point, involve armed conflict in which some kind of confrontation would make the use of weapons necessary. The kind of weapon did not matter, they were generally the ones they could find.

This mentality, which existed among young people opposing Franco and trying to develop alternatives to the regime from within universities, factories or districts, or even without being considered real activism, needs to generate a reflection on how the idea of armed conflict was embedded in the society of that time. This does not seem difficult to understand, especially when thinking about the war that had annihilated the Republic, the Francoist repression, the heritage from two World Wars, the processes of decolonisation, the Cold War, including the emerging collectives which opted for armed action in different places in Europe during the late seventies.

In some specific activist sectors, what was known, what was being studied, what was being theorised was the way towards revolution and social transformation through the use of violence. They clearly considered that the established order was substantiated, partly, as a function of its military power. For example, the Prague Spring in 1968, as well as Allende’s government in Chile in 1973, were brought down by the use of weapons. Would it be possible to imagine a revolution, change the world drastically, without following the path of violence? Does the pacifist way have a future? In a world with this much violence and experiences as the ones aforementioned, many would think not. The nonviolent option, as opposed to violence, has only been present in few collectives. Mainly, in frameworks linked with basic Christianism, when considering the fifties, sixties and seventies.

The conviction that is was possible to change the world, based on nonviolent activism, finds its roots in the Christian values, and this mentality started affecting other ways of thinking

A concrete case might be able to help us to illustrate this evolution. The filming of Can Serra. La objeción de conciencia en España (1975-1976)(Can Serra. Conscientious objection in Spain) started in the year 1975. This documentary collects the testimonies of a group of young people who chose not to fulfil their compulsory military service, but rather to disobey the State and work for society through the promotion of education and social assistance. They did so in the Can Serra district of l’Hospitalet de Llobregat. A district which had grown due to the arrival of immigrants from different regions of Spain, starting in the seventies, where all basic services were lacking. The objectors had foreseen to work for one year in the district, as agreed with the district community and the parish. During this period, their work would be documented. Afterwards, they would hold a press conference to present the alternative they proposed to a state they criticised for its militarism and repression. They took into account the fact that, after making their situation public, they would be incarcerated, which is exactly what happened.

The film wanted to make a contribution by spreading their voice, and a distribution plan was set up. For this kind of films, usually one or two copies of the original were made; possibly, for this one, ten would be made. The conventional format was 16mm, but for this occasion, also a Super 8mm copy was made, a domestic format which simplified its projection. An S 8 projector was more affordable than a 16mm model. The film was distributed through the usual channels of clandestine cinema in that period, and not only was it useful to explain the living circumstances in Can Serra, but also what conscientious objection in Spain represented, through the testimony of Pepe Beunza, considered to be the first Spain’s conscientious objector against military service, with a clear intention towards political transformation, and to denounce the militarism which, to his understanding, dominated the world and prevented life from developing properly.

Based on these platforms of ideologies and Christian values, there was a growing conviction that it was possible to change the world through nonviolent activism, without the need to use weapons. And this mentality started affecting other ways of thinking. The eighties seem a key period when defining a change that would grow to considerable dimensions. Gandhi started as one of the first voices to be read beyond the tradition to which he belonged, the civil rights movement and Martin Luther King (despite the fact that he was killed) showed a different path which gave results, the antinuclear movement pointed out that, in the new world, war would only have losers, and the ideas of Einstein, Rusell and, especially, E.P. Thompson were particularly present.1

Society, in its majority, has become nonviolent. The rejection of violence is general nowadays, whether it is out of principle or rather as a strategy

We can also highlight other names of persons who developed their activity in Catalonia and who, through their reflections and their activism, contributed to this change: Vicens Fisas, Pepe Beunza, Manuel Sacristán, Francisco Fernández Buey… In a place like Can Serra, people could be found with different ways of thinking and acting (Christians, Marxists, libertarians, antinuclear, ecologists, etc.), working daily to build alternatives to the Franco regime. The mobilisation of the objectors helped in the union of antimilitarism and nonviolence. Also the mobilisations against NATO, against nuclear weapons, in favour of feminism… We could say that there was a consolidation of the idea that nonviolence aims at disarming the violence, exerted by states, governments, economic and corporate agents, etc. to build societies free from oppression.

During the following decades, this process was not reversed, but rather widened and intensified. The mobilisations against NATO and nuclear weapons contributed to this. This process could not only be seen in Catalonia, but went international. A good example of this aspect was the emergence of the so-called alter-globalisation at the turn of the century, and its clear position in favour of nonviolence. The action methods chosen were civil disobedience and nonviolent resistance2. Later came, for example, the massive mobilisations against the war in Iraq in 2003 in several places around the world, with Barcelona being one of the prominent cities.

At the start of the second decade of the 21st century, massive social mobilisation was seen again in Catalonia, in the framework of the 15M movement and the one in favour of independentism, where nonviolence has been the majority conduct. Society, in its majority, has become nonviolent. The rejection of violence is general nowadays, whether it is out of principle or rather as a strategy. This does not mean that there are no more collectives which keep defending violence, even at the point of putting it into practice, but the vast majority of mobilisations we have seen in recent years could be defined as nonviolent. After the 15M rallies, the Plataforma de Afectados por la Hipoteca (PAH, Platform of Mortgage Victims) became a model of nonviolent conduct, using a wide range of actions going from negotiating in the banking branch to occupying that same branch, or from escraches to stopping evictions. We could say something similar about the demonstrations linked to independentism, where clear evidence was seen in the defence of polling stations for the 1st October referendum.

A society which considers itself democratic should look at the actions of nonviolent mobilisation, disobedient or not, as a nuisance that needs to be addressed and resolved

Nowadays, nonviolence is recognised as an act of courage for what concerns the creation of a positive alternative to the existing reality. Nevertheless, nonviolence is challenged from two –very different– positions: by those who consider violence as a better option, or one that should at least be taken into consideration, and by those who consider nonviolence to be violence. Nonviolent conduct, disobedient or not, is easily questioned, even criminalised, when the power which it is challenging considers its stability to be at risk.

I consider it necessary to hold an in-depth public debate on the subject whether nonviolent actions, disobedient or not, represent an attack to democracy or rather an intent to deepen it. The history we’ve been addressing here should make us reflect on how nonviolence has been siding with processes that were aiming at increasing and deepening democracy, creating a society with more freedom, justice and equality. A society which considers itself democratic should look at the actions of nonviolent mobilisation, disobedient or not, as a nuisance that needs to be addressed and resolved, beyond votes, majorities and minorities. And it would be advisable to insist in the fact that legality or legitimacy does not depend on majorities.

In this present, historical moment, social support and nonviolence, including the possibility of practising nonviolent civil disobedience, should lead us, as a society, to considering its acceptance, and even its regulation. Accepting nonviolent civil disobedience as a society, even reflecting on possible ways to regulate it, implies accepting the need to think about and reconsider our legality, our legitimacies, our ethical concepts about what is just, good, correct, etc. The mere fact of being a law doesn’t make a law also just, nor does what we could consider as just stops being so because a law says it’s illegal. We should not lose another opportunity to generate a true process of reflection and debate on the place of nonviolence, including nonviolent civil disobedience, in a society which considers itself democratic.