The power of people 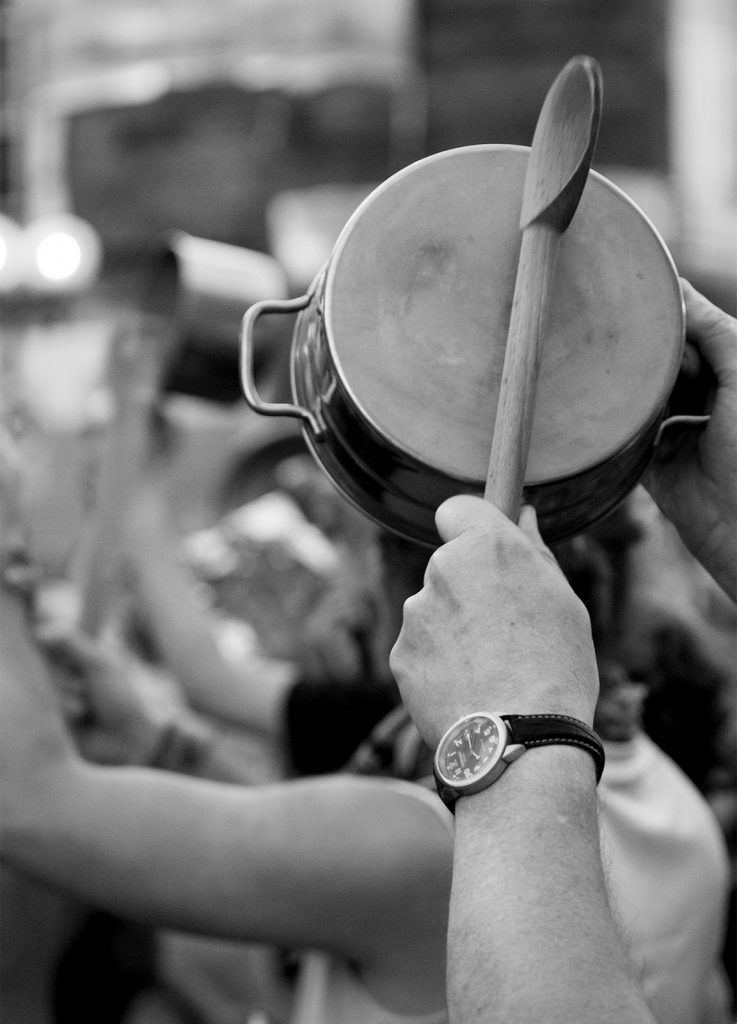 That day we still did not know it but it was the first day that Catalan society decided to say “enough,” launching a political process that would end up on the front pages of newspapers from around the world. It was 10 July 2010, the Spanish Constitutional Court had just struck down part of the Statute of Autonomy of Catalonia that had been ratified in a referendum, and a horde of people took to the streets to protest under the slogan “We are a nation, we decide” to say that no court could be above the will of the people expressed in the polls.

That massive demonstration was followed by many more that were even bigger, but always with the same spirit: a peaceful mobilization featuring three or four generations of entire families taking to the streets in a festive atmosphere to demand their democratic rights. Later we would call it “the revolution of smiles” precisely because of its peaceful and festive nature. A revolution that reached its climax with the referendum that took place on 1 October 2017, when the smiles froze under the blows of thousands of Spanish police officers bent on preventing people –unsuccessfully– from voting.

Seven years have gone by since Catalan civil society organized around an organization that already existed –Òmnium Cultural, with almost 60 years of history– and of another organization that emerged as a result of the pro-sovereignty movement, the Catalan National Assembly. We did not embark on a nationalist battle; it was a struggle for civil rights, where more and more people of different ideologies and origins came together with the common goal of demanding the right to vote as a fundamental right, as well as other civic and democratic rights. The two organizations that have wound up leading this citizens’ movement have always been clear about the fact that our movement had to focus on active and peaceful civil disobedience, and we have based our entire strategy on the power of organized people engaged in small, ordinary, nonviolent actions: from wearing a T-shirt and going out on the street on a certain day and time to withdrawing a symbolic amount of money from ATMs, always in the spirit of the revolution of smiles. And that is how, since 2010, Europe’s most massive demonstrations in decades have taken place in Catalonia and without a single incident: no broken glass, not even litter in the street. So there is no excuse for the State to have reacted as virulently as it has against a movement of people of peace. And today the leaders of this movement are in prison. This is both shocking and unacceptable.

To understand the inception of this citizens’ movement, it is essential to talk about the great joint campaign called “Ara és l’Hora” (It’s time) which the entities launched to summon the citizenry to participate in the non-binding referendum of 9 November 2014. This campaign was civil society’s first great training ground for political action to achieve political and civic objectives outside political parties.

“Ara és l’Hora” had professionals from various business sectors who contributed their talent to create from scratch a way of working with volunteers, but with professional standards. The goal was to produce a campaign that would convince as many people as possible to vote in the popular referendum called by the Catalan government. The campaign was always transparent –the explanatory memorandum is still in Wikipedia– and was based solely on the power of people. Its first objective was therefore to create a large database that would allow the movement not to depend on big sponsors, but on the small economic contributions made by thousands of people and, more importantly, to communicate directly with people without the need of intermediaries dependent on the Establishment; technology made this possible. And always being aware of the fact that a good territorial network based on direct contact between people was what would generate trust and make the movement grow and move forward. Thus we were able to organize a mega-survey that reached a million households, a marathon of hundreds of thousands of phone calls made by volunteers, and dozens of events organized thanks to the contributions –in time and money– of more than 100,000 people, without a penny of public money. The campaign was a success and helped allow 2,300,000 people to vote peacefully and without incident that 9 November despite the opposition of the Spanish government.

The emergence of cross-cutting organizations such as Taula per la Democràcia and En Peu de Pau are proof, once again, of the extent to which nonviolence defines the pro-sovereignty movement

Without what was learned with “Now is the Hour” it surely would not have been possible to create Crida per la Democràcia, one of the tools that, three years later, allowed us to reactivate the large network of anonymous people willing to support the binding referendum called by the Catalan government for 1 October 2017. Largely based on new tools such as the WhatsApp messaging service, Crida per la Democràcia again achieved great milestones: mass mobilizations and fundraising based on micro-donations that was used not only to pay for the various actions of the campaign, but also to create a Solidarity Fund to cover the legal expenses and bail of all those people persecuted by the Spanish justice system as a result of the call for the referendum.

The way in which organized civil society has worked in Catalonia has sparked the interest of other citizens’ movements around the world based on nonviolent civil disobedience, and experts from many countries have wanted to learn about the Catalan case because of its exemplary nature. Human rights activists and Nobel Peace Prize recipients such as Rigoberta Menchú, Ahmed Galai, Desmond Tutu, Adolfo Pérez Esquivel and Jody Williams have all joined the “Let Catalans Vote” movement to support the demands of Catalan society, alongside other peace activists from around the world such as the co-founder and president of the Mothers of the Plaza de Mayo, Mirta Baravalle, and intellectuals such as Noam Chomsky and Zygmunt Bauman.

Traditionally, Catalanism has been Europeanist: open, tolerant, peaceful, democratic and inclusive; foundations that in today’s Europe have become so weak that they are hard to recognize

Even though the Catalan movement has been exemplary in form and substance, what has happened leads us to think that, surely, for the State, it would have been easier if there were violence in Catalonia. That would have justified their repression, the attacks on institutions, against its leaders and its mobilized citizens. But that has not been the case. In fact, the more the State has resorted to repression, the more determined the Catalan movement has been to express itself peacefully and courageously –without falling into provocations. The emergence of cross-cutting entities such as Taula per la Democràcia (with a large representation of organized civil society, ranging from trade unions to scouts to the cultural world) and En Peu de Pau (Standing for Peace) are proof, once again, of the extent to which nonviolence defines the movement. A movement which, by the way, in February 2017, mobilized in favor of accepting refugees in Catalonia in a massive demonstration of thousands of people under the slogan “We want to welcome them.” The fact is that Catalanism has been Europeanist in the founding sense of the expression “Europeanist”: open, tolerant, peaceful, democratic and inclusive. These foundations in the Europe of today have become so weak that they are hard to recognize.

Last autumn, Òmnium published a video entitled “Help Catalonia, Save Europe,” which amassed more than two million views in record time. In the video we explained that the idea of Europe can only survive if the values of freedom, democracy and human rights, which are so much under threat in Spain today, are preserved. Today Catalonia offers Europe the possibility of reconnecting with its origins. We are pacifists, champions of social rights, proud of having achieved social cohesion in a Catalonia that is ideologically, religiously and socially diverse. Europe must stop looking the other way, not only to help the Catalans, but also to help itself maintain the values of peace, dialogue and democracy that are at its origins. What happens in the heart of Europe is the responsibility of Europe because it will have consequences for all of its fellow citizens.