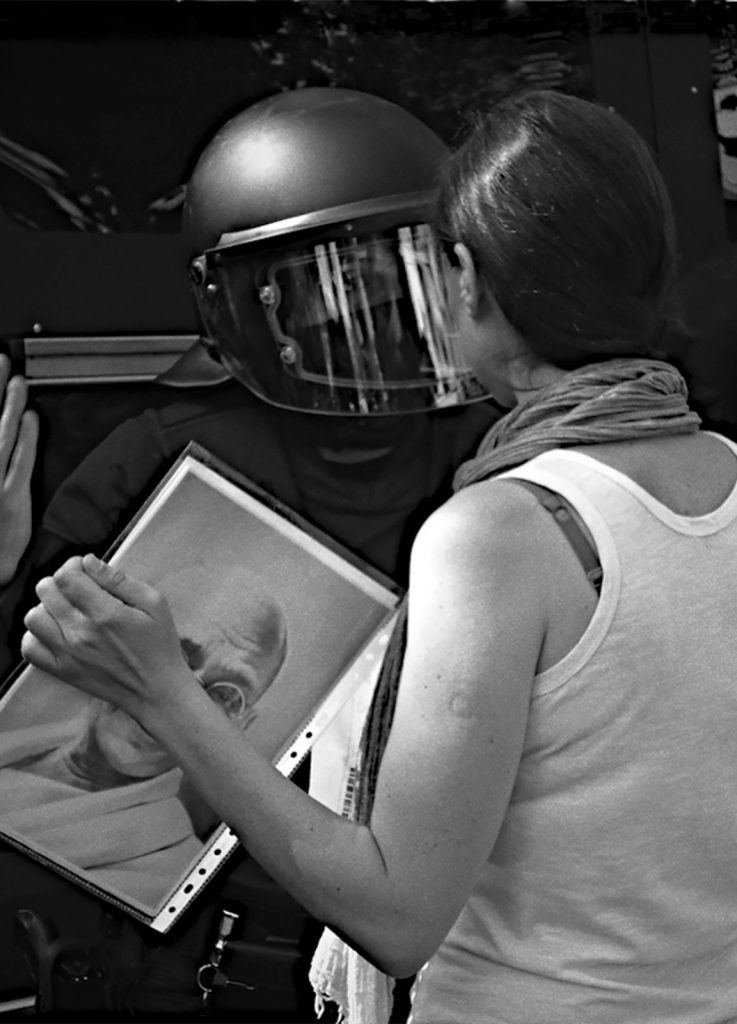 To date the movement for Catalonian independence has followed the nonviolent path, employing classic methods of mass mobilization, independent action and non cooperation utilized by Gandhi, Martin Luther King Jr. and other pioneers of civil resistance strategy. Gandhi described his method as satyagraha, which he defined as forcefully upholding truth, based on the principle of ahimsa, or non-harm1. He considered satyagraha an effective “weapon” to be used in struggles against injustice and oppression. Satyagraha became the basis for the national freedom movement to end British imperial rule in India. Martin Luther King Jr. employed the method in the struggle against racial segregation in the United States, winning the right to vote for African Americans and outlawing racial discrimination in public facilities. Nonviolent methods have been used in Ghana, the Philippines, Indonesia, South Africa, Nepal, Chile, Serbia, Tunisia, Guatemala and many other countries to achieve political freedom and end repressive rule.

In all of these cases popular movements were campaigning against grave injustices (foreign rule, racial apartheid, dictatorship) in which the moral argument was clearly on the side of the civil resistance campaign. The success of a nonviolent movement depends on seizing the moral high ground in a dispute and attracting the sympathy and support of third parties. This requires political objectives that go beyond self-interest and appeal to higher values of human dignity and freedom. If a movement is perceived as seeking to maintain privilege rather than overcoming oppression, it will be more difficult to attract the support needed for success.

Nonviolence has been used in many countries to end authoritarianism and establish democracy, but the present case is not a struggle against dictatorship but rather “a clash of democratic legitimacies,” as one writer termed it, the demand for independence in democratic Catalonia vs the constitutional integrity of the democratically elected government of Spain2. The Madrid government showed its authoritarian teeth in harshly suppressing the October 1 referendum and cracking down on movement leaders, but the basic structure of the state is democratic. This is an important political reality, which in light of Spain’s difficult history should be respected. It also raises questions. Can a movement be considered democratic if it seeks to undermine the structure of a democratic constitutional order? What are the consequences for peace of severing the linkages that hold a state together?

Social movements that strive for major political objectives such as political independence or territorial autonomy almost always face violent repression from their adversaries. In their empirical study of nonviolent civil resistance, scholars Erica Chenoweth and Maria J. Stephan have found that campaigns for significant political change encountered repression in 88 per cent of the cases examined3. We have seen evidence of this already in the brutal behaviour of Spanish security forces in their attempt to crush the vote. Nonviolent movements do not cause physical harm to their adversaries, but the repression unleashed against them can result in casualties, suffered mostly by those in the nonviolent campaign. In the U.S. civil rights movement, 55 civil rights workers were killed, including King. This is not an argument for refraining from action, since many of those who struggle for justice are willing to suffer for their cause, but it does raise the question of relative justice. Is the goal politically and morally compelling enough to justify the sacrifice necessary to achieve it?

Chenoweth and Stephan identify two major factors that are most often associated with political success in civil resistance campaigns: mass participation and loyalty shifts4. Movements that have the largest levels of mass support are most likely to achieve their political goals. A movement that can mobilize hundreds of thousands of people in the streets and win millions of votes in a referendum clearly meets the threshold of mass participation. Loyalty shifts are also necessary, however. Success depends on the ability of a movement to convince supporters of the opposition to switch sides or remain neutral. This is especially important among members of the security forces. Many analysts have emphasized the importance of winning the sympathy and support of those who were previously uncommitted. Writer Barbara Deming called this the “special genius” of nonviolence, the ability of a nonviolent movement to attract the support of those who were indifferent or hostile to the cause5. Political analyst Gene Sharp referred to this as the art of winning over third parties6.

Loyalty shifts are necessary. Success depends on the ability of a movement to convince supporters of the opposition to switch sides or remain neutral

Achieving loyalty shifts requires a strategy of gaining allies and cultivating support in the ranks of the opposition. Gandhi recognized that he could not gain independence for India unless he could win support for his cause among important constituencies in England. When he visited London in 1931 for the round-table negotiations on self-rule, he visited and was cheered by textile workers whose factories were losing production because of the freedom movement’s boycott of British imports. He also met with writers and cultural luminaries to win their support. This cultivation of British public opinion paid off in 1945 when the Labour Party came to power and promptly agreed to negotiate the terms of political independence. King likewise recognized that African Americans as a minority could not defeat segregation without the support for white allies. He cultivated the support of religious communities, labor unions, and powerful groups within the Democratic Party to gain the political support needed to win victories for civil rights.

In his famous Letter From a Birmingham Jail King identifies dialogue as one of the four essential steps of nonviolent action7. The purpose of a civil resistance campaign, he argued, is not to defeat the adversary but to achieve reconciliation, to generate enough pressure to bring the opponent to the bargaining table and reach a negotiated solution. Gandhi also emphasized the necessity of negotiation and dialogue. The goal of political struggle, he believed, is to exert pressure for negotiations to achieve social betterment.

The impetus for resolving the Catalan crisis may have to come from civil society, which would fit well with the Gandhian tradition

The commitment to dialogue implies a readiness to compromise. Accommodation is a common mechanism for achieving political change, according to Sharp8. It occurs when the nonviolent campaign generates enough pressure to impose costs on the adversary and creates incentives for coming to the bargaining table. The adversary still has power to say no, but the price of rejecting the demand for change becomes too high and a negotiated solution becomes the preferred option. For its part the nonviolent campaign agrees to accept an agreement that may be short of its maximum demands but that achieves sufficient change to satisfy its supporters and achieve greater justice.

In the case of Catalonia, for a negotiated solution to emerge both independence leaders and the government must be prepared to make concessions. This seems hard to imagine now in the midst of partisanship and brinksmanship. The impetus for resolving the crisis may have to come from civil society, which would fit well with the Gandhian tradition. Citizen initiatives will be needed on both sides to identify consensus solutions and pressure political leaders to negotiate a political agreement that meets the demands of justice and avoids violence.

7. “Letter from a Birmingham Jail,” April 1963, in A Testament of Hope: The Essential Writings and Speeches of Martin Luther King Jr., edited by James M. Washington (Harper SanFrancisco, 1986).