Popular initiatives in the defence of nonviolent action 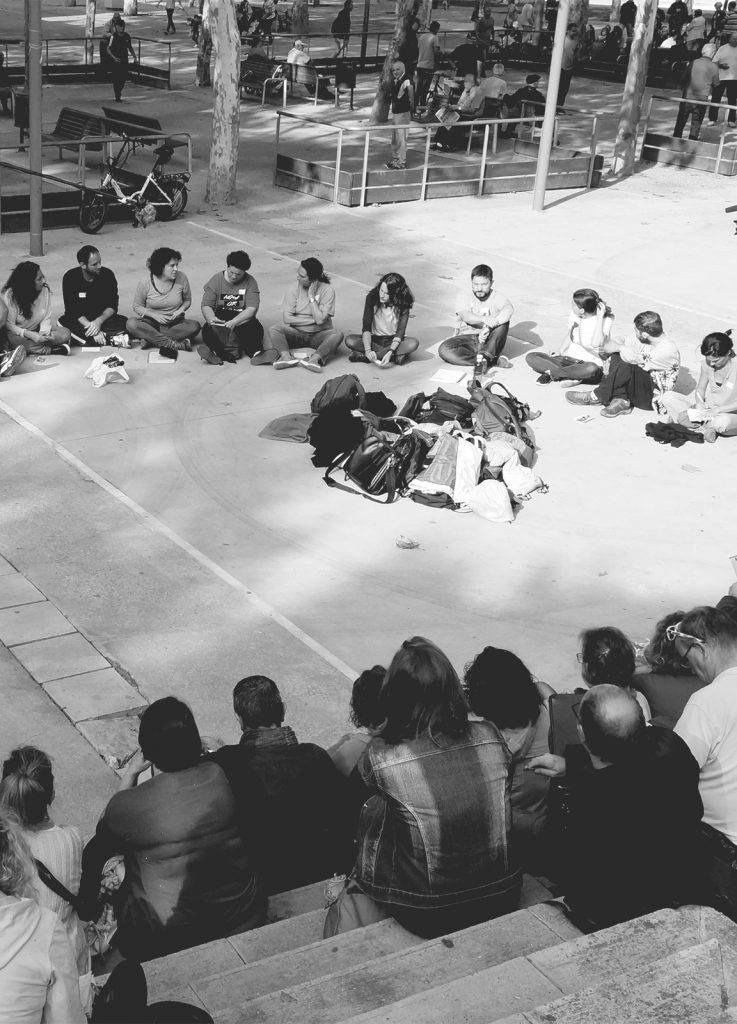 The history of pacifism and nonviolence is deeply rooted in Catalonia, and it is maybe due to this experience as a society that, at present, we find ourselves on a path of peaceful and nonviolent resistance towards the Catalan Republic. According to Botey1, since the end of the Civil War, Catalonia has seen groups emerging frequently, in favour of peace or against militarism, such as mili KK, Ganva-Gamba (Grup Acció No-Violent Antimilitarista and Grup Antimilitarista de Barcelona; Group for Nonviolent Antimilitarist Action and Antimilitarist Group Barcelona), in 1978; the campaign in favour of the “no” vote in the referendum for entry in NATO, in 1986; or the platform Aturem la Guerra (Stop the War), since 2002.

This tradition of pacifism has generated a desire for peace in Catalonia which is deeply rooted in society, probably more than in anywhere else in the Spanish state. The five basic steps of nonviolent action (Olivella2, Xirinacs3) –dialogue, protest, non-cooperation, civil disobedience and the creation of alternatives– are useful when trying to organise the present path of peaceful mobilisation linked with independentism.

Already in 2009, faced with the repeated negative response of the Spanish state to negotiate on the organisation of a referendum, Arenys de Munt held the first municipal survey on the independence of Catalonia, where the “Yes” vote prevailed with a score of 96.2% on a voter turnout of 41%. Civil society, alongside organisations such as Òmnium Cultural and the Assemblea Nacional Catalana, organises itself and starts creating alternatives, with popular surveys on the independence of Catalonia in the entire territory. Later, on 9th November 2015, the Catalan government, with a majority supporting independentism in the Parlament de Catalunya, organises the poll on independence. Finally, last 1st October 2017, the referendum on independence took place. This referendum, prohibited by the Spanish government, was an act of civil disobedience and non-cooperation. Getting it done has been a work of nonviolent engineering, since ballot boxes and papers were pursued and hidden all over the country (Vicens i Tedó4).

Two days before 1st October, citizens, concerned about not being able to exercise one of their basic rights, the right to vote, organised themselves and became an assembly movement, organised per school and, at a later stage, per district, through the Committees in the Defence of the Referendum (CDR). Afterwards, the power of having so many people organised in districts needed to be preserved for the future Republic, and at present, the majority of CDRs still gather and have become Committees in the Defence of the Republic. This movement operates as an assembly, with all the advantages and disadvantages this brings along, and is organised in territorial –from districts to regions– as well as national assemblies. We are dealing with a pluralistic collective, with people of different ages and origins, but with one common feature: the will and the strength to work on the construction of the Republic in a nonviolent manner.

CDRs are pluralistic collectives with one common feature: the will and the strength to work on the construction of the Republic in a nonviolent manner

On 1st October, images could be seen worldwide of self-organised groups of people in front of polling stations, disobedient and non-cooperative, in a peaceful and organised manner, but insubordinate to the laws that prohibited the ballot, receiving the blows of the Spanish police’s batons. Catalonia’s peaceful and nonviolent population raised and let its voice be heard to the entire world, as well as showing the fierce repression of the Spanish state and its prohibition of one of the basic rights, the right to vote.

In fact, since 1st October, the Spanish state has enhanced the repression and started with the first threats, arrests and violent actions. For this reason, one of the main concerns of the nonviolent persons was, at that time, that the conflict could become violent and that the violence, used by the Spanish government, could generate more violence in response. As such, on 17th October, En Peu de Pau (Standing for Peace) saw the light, a social initiative, aiming at extending and giving roots to the peaceful and nonviolent resistance in the defense of liberties. As the result of a shared reflection on the incidents that occurred during the month of October 2017, people and collectives of different sensitivities gathered to discuss the extension and socialisation of the different legitimate social and civic actions, of peaceful and nonviolent nature, which had characterised the mobilisations in the defence of basic rights and liberties, and the responses to the repressive direction the state had taken. Precisely for this reason, En Peu de Pau considers it of vital importance to preserve, strengthen and widen this culture of strictly nonviolent citizens’ mobilisations, at present as well as in the future.

En Peu de Pau has three basic objectives: a) generate a pluralistic framework for the coordination and creation of networks, in order to preserve the nonviolent character of civil mobilisations and responses; b) consolidate and extend the practice of peaceful and nonviolent response in the face of the restrictions of citizens’ rights and liberties; c) organise active social teams, in the framework of future mobilisations, which offer safe shelter, peace and quiet in a coordinated way, and preserve the nonviolent manner in which they are already working.

Since it saw the light, En Peu de Pau is trying to cover four complementary needs, on top of those that were already addressed by a variety of movements and persons. In first place, creating a platform for the coordination and generation of a common rhetoric on peaceful and nonviolent response, based on the moral authority of those who were already deeply involved and also the agents who are playing an active role in the mobilisations. In second place, turning it into a space for operative coordination for the different collectives that can contribute in improving the organisation and preserving the nonviolent tone of these mobilisations. In third place, providing access to training sessions and resources on peaceful and nonviolent action to everybody. And lastly, develop a communication operative which diffuses all information, related to the three previous points, to all citizens. One of the most visible results of this movement can be found in the 7 commandments. In this way, En Peu de Pau is playing a fundamental role in the persistence of pacifism and nonviolence on the road towards the Catalan Republic.