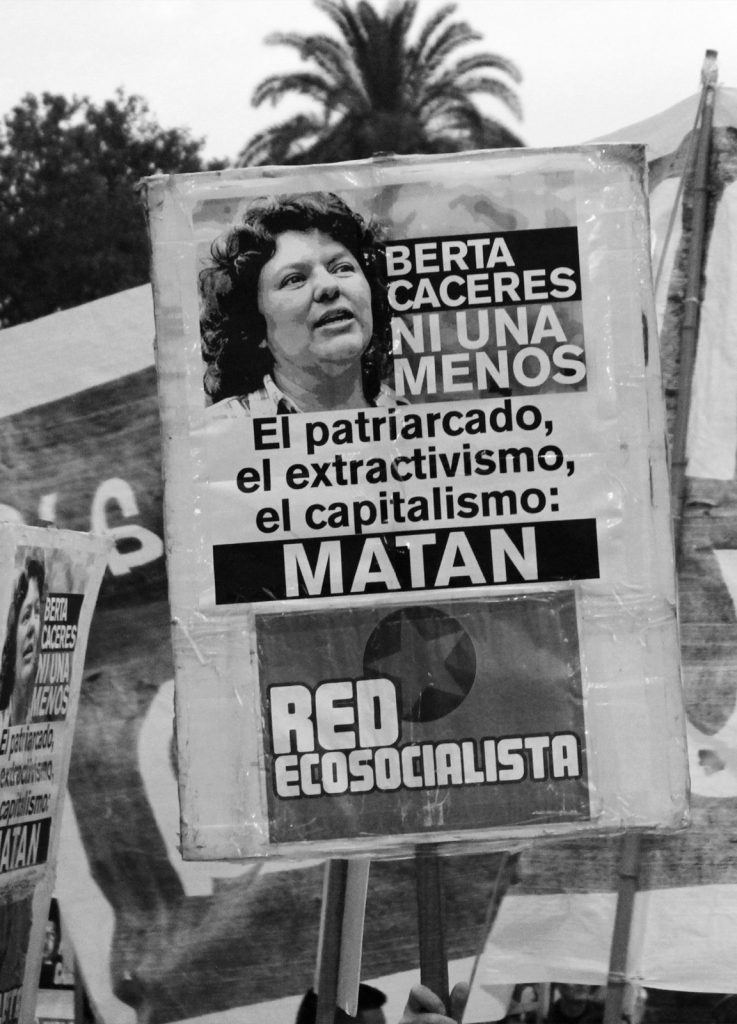 In Guatemala, human rights defenders who protect the territory, the environment, the waterways and other natural resources live under constant harassment from the State and the corporations who want to impose mining projects on the territory. Businesses and traditional sectors consider this struggle to defend water and other natural resources an “opposition to growth”, while the government unofficially defines those opposed to their plans as “enemies of the State”. We find an example of this in the districts of Santa Rosa and Jalapa (in north-eastern Guatemala), where the mining project “El Escobal” was imposed. There were at least 125 human rights defenders illegally criminalised by the Guatemalan National Civil Police officers. A similar situation took place in the pacific resistance in La Puya, in the Guatemalan towns of San José del Golfo and San Pedro Ayampuc, the scenario of the “Progreso VII Derivada” project. The government unfairly criminalized at least ten human rights activists.

Since the chemical mining of metals commenced, the majority of the population has shown their opposition to this activity in the national territory. A conflict that remains in the public mind is the one that took place in Los Encuentros, in the Sololá district, in the Guatemalan plateau. The roots of the conflict are found in the transfer of a ’cylinder’ of the Montana Exploradora corporation; a move that led to the death of one of the community members who stood in the way of the company’s heavy machinery. Subsequent industrial projects that have been authorised or reactivated have also provoked strong reactions from the citizenship. Activists who protest have been criminalized by the government and by transnational corporations for defending the territory, the environment, water and other natural resources.

But these criminalization processes have not had the desired effect –bringing an end to the social protest and a weakening of the community. This is the reason why the companies and the police have proceeded to physically attack the members of the various communities resisting the mining activity. The most significant examples of repression against pacific resistance have taken place in the “Progreso VII Derivada” and “El Escobal” projects.

In all these scenarios the community activists have warned of an alliance between security forces and the company. This implies a serious violation of human rights and a criminal behaviour by the state’s security actors and by the managers and workers of the companies.

In the criminal proceedings currently investigated by the prosecuting authorities of Guatemala there serious wrongs committed by national and transnational companies have been exposed. The sectors where there are more concerns are the palm oil and the mining industries. In the past year, seven managers and legal representatives have been implicated in judicial proceedings for corruption, attacks against human rights activists, and environmental crimes ranging from water pollution (by hydrometallurgical companies), the illegal use of non-renewable resources or the attempted murder of community activists opposed to mining projects 1. To the previous cases we have to add the more than fifty legal complaints against the sugar and palm oil industries for altering the course of rivers in the country’s Pacific coast.

The Guatemalan legal system allows victims to participate in criminal proceedings; an option that is also available for human rights organisations. But the economic might of the companies involved allows them to stretch the legal procedures and use this strategy to avoid facing justice. All of this has led CALAS (Guatemala Center of Legal, Environmental and Social Action) to participate in the cases that are now active in the justice system, be it representing the community leaders, the human right activists who have been the victims of the corporations or by positioning itself as one of the plaintiffs, hence guaranteeing access to justice and that the crimes committed will not go unpunished. Another option open to CALAS is participating institutionally in the judicial procedures as a victim of environmental crimes, implicating the prosecuting authorities in criminal investigation.

In the past year, seven managers and legal representatives have been implicated in judicial proceedings for corruption, attacks against human rights activists, and environmental crimes

To date, the most significant judicial proceedings against corporations are the following:

These cases have brought about substantial advances in the country’s justice system, although they have also highlighted the development of malicious litigation processes on behalf of businesses, weakening the justice system when it comes to guaranteeing the appearance in court of the higher echelons of the company hierarchy. The most glaring examples of this can be seen in square 1 and 5 of the table above: they have bot escaped the course of justice or fled from the country to avoid their arrest by the criminal authorities.

To sum it all up, we can say that there is a certain improvement in the Guatemalan justice system, insofar as searching, sanctioning and punishing corporations’ criminal behaviour and human rights violations is concerned. But we must also state that these improvements must be strengthened by applying the legislation on human rights and company law that are applicable in this field.

1. In 2015 the manager of Minera San Rafael (a national division of the Canadian company Tahoe Resources Inc) underwent a criminal trial and was sent to preventive prison for the alleged industrial pollution of the Escobal, an affluent of the Los Esclavos River, the main water supply for the communities in the Santa Rosa district. Two years later, in 2013, Alberto Rotondo, the security manager of the same mining company was arrested in the Aurora Airport of Guatemala City when he was trying to flee from justice, after he ordered the firing of shots against community leaders who were opposed to the imposition of the mining project of the afore mentioned company.