PBI: making visible the “intrahistory” of the people fighting for peace 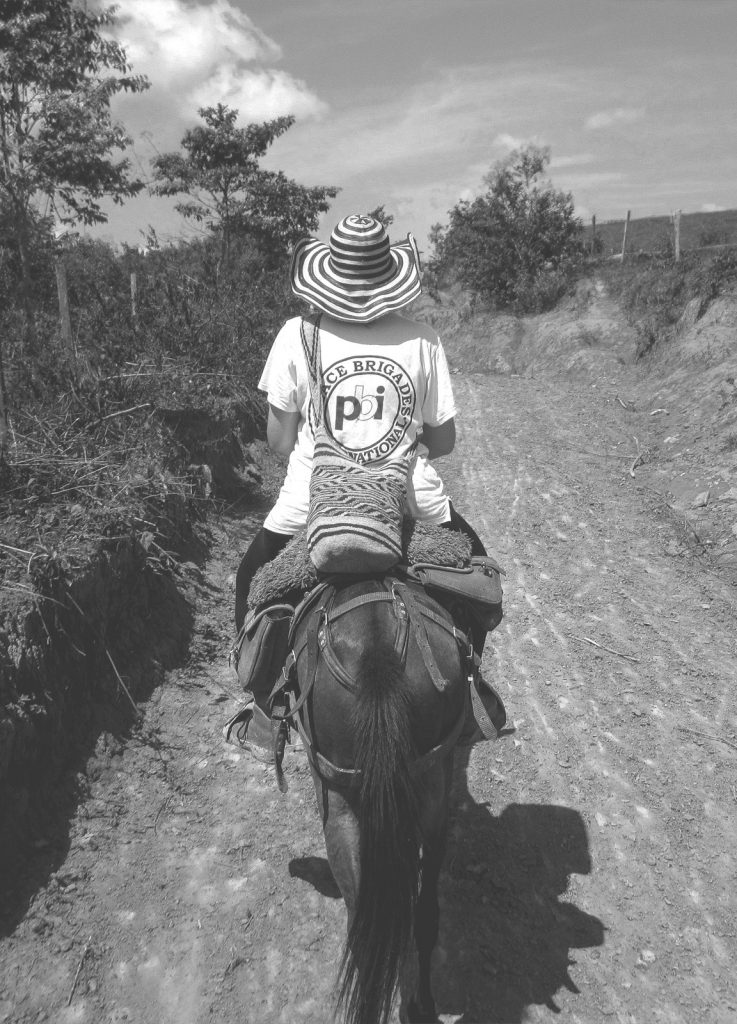 PBI has been creating spaces for peace for the last 35 years, accompanying human rights defenders who are threatened due to the nature of their work. At present, there are PBI international volunteers in Colombia, Guatemala, Honduras, Mexico, Indonesia, Nepal and Kenya. This fieldwork has been supported by the 14 national PBI groups whose main task has been to build a support and assistance net that springs into action when the accompanied people receive threats or harassment. This mechanism promotes action from diplomats, government members and other key actors, leading them to put pressure on the alleged authors of human rights violations or local institutions that can help put an end to abuse.

These cracks for peace opened by human rights defenders in their own countries are initially small, but they are deepened with international actors and attention. PBI accompanies the history -without capital H, what Miguel de Unamuno defined as the ’intrahistory’-, the history of those in the margins struggling to change History -with capital H-.

The headlines of the Colombian Peace Agreements have had President Santos and FARC Commander Timochenko’s name on them. However, those that will make the agreements possible are the people that have for decades aligned themselves with a non-violent solution, risking their life every day. This is particularly true of human rights defenders and peasant communities, who want to live without conflict, proposing imaginative alternatives that will ensure the protection of the community and a respect for life (their own, as well as those of future generations and of the environment in which they are living). They are the people who have humanized the conflict, reminding us that we must demand respect for human rights even in times of war; and that civilians should be kept safe from these scenarios. All the while bearing in mind that in Colombia 8 out of every 10 victims of the ongoing conflict are civilians. The names of the Negotiators, the Commanders-in-chief and the Presidents are written in full and in capital letters; victims, displaced people et al are written in non-capital letters, without their full names, and generally hidden behind numbers.

The Negotiators, the Commanders-in-chief and the Presidents are written in full an in capital letters; victims, displaced people… they have to make do with non-capital letters and generally hidden behind numbers

In PBI we want to put the focus on those who give a voice to these collectives; and that pages, books and volumes of those that are documenting aggressions become read in relevant institutions, gaining a relevance that is important for the victims’ loved ones; bringing reason where it is lacking, hope to the communities and encouragement to the younger generations. This is why every brigadista -and they number more than a thousand- that has been a part of the PBI in these 35 years is a loaded with many life stories of the intrahistory. These people are not normally featured in the media and, when they do, their story is often distorted. The PBI volunteers do know their story well and they feel it is their duty to speak up, to make it known. This is the case of the reports of the experiences and struggles of Hilma, Luis Eduardo, Enrique, Ramiro, Brígida… all names of the intrahistory.

Every brigadista has a clear understanding of the word “resilience”: our creators of intrahistory bring meaning to this concept every day, transforming death into life, both in dignity and learning. This is what happened on February 21st 2005, with the murder and dismemberment of Luis Eduardo and five other people, three of them children. A few weeks after this massacre, the history of violence against the Peace Community in San José de Apartadó was reproduced in the four corners of the world, with the involvement of civil organisations, MPs, ministers of foreign affairs, the United Nations… On the other hand, Álvaro Uribe’s lies about the massacre, when he declared that it had been caused by internal vendettas within the guerrillas, embarrassed the diplomatic agents present in Colombia, who were well aware of the truth, partly thanks to the intense dialogues held with the PBI. In the end, the members of the military who were guilty of the crime were judged in 2013 and given an exemplary sentence (twenty years of imprisonment) that went some way into explaining the inner workings of the army, in cahoots with the State and the paramilitaries. The massacre was carried out in a joint operation by the ’Tolová Block of Heroes’ [Bloque Héroes de Tolová] of the ’United Autodefense of Colombia’ [Autodefensas Unidas de Colombia (AUC)] and the troops of the ’Army’s XVII Brigade’ [Brigada XVII del Ejército].

Every brigadista has a clear understanding of the word “resilience”: our creators of intrahistory bring meaning to this concept every day, transforming death into life, both in dignity and learning

Withstanding numerous attacks, PBI has been next to the Peace Community since 1999, despite numerous attacks. The question hanging on all those years of is: what level of protection can PBI provide if the assassinations continue? The 2005 massacre was a turning point, and although attacks continued, they were never as vicious. Non-interference in domestic affairs is a basic PBI principle and, in this case, it was our primary criteria. Despite the doubts that arose on whether or not we should remain or depart, we decided to continue by their side in the path they had chosen. This allowed the community to widen the space for peace while the worst attacks were being made, partly thanks to PBI’s permanent presence and the hard work in making a difference. It was the moment to demand respect, investigations and justice to the XVII Brigade, the Home Secretary and the prosecuting authorities… Not only in Colombia, but also in North America and the European Union.

The brigadistas who stood by the peasant community of San José, day and night, never had any doubts on the pertinence of being there. I will never forget the look of terror on a five-year old girl when she saw us loading our backpacks to get ready for the relay. She looked towards the hill that surrounded the village from where the army watched over the community and said, “Please don’t leave, they are still here”. Or will I forget how the community leader hid behind the brigadista when the paramilitaries held up our car with the intention of robbing the money earned in the sale of cocoa. But I also have engraved in my memory the faces of satisfaction of the Internal Counsel when we stated that we had managed to get influential members of the US Congress to give the Colombian Government a wake-up call on their position on the massacre. And this resilience continues to overcome obstacles with the planning of a macro-delegation that will attend the 20th anniversary of the community, which will be celebrated in San Josecito and will be attended, once again, by three councillors of my city.

PBI aims to magnify each of these heroic and creative acts that promote the dignity of the human being: the exemplary behaviour of the unknown people we accompany

As has been mentioned, PBI has not only been present in ‘San José’; it was in fact born in Central America in the 1980s. It saddens us to say that the projects there have had to be reopened due to the ongoing human rights crisis that this region is suffering. There might be changes in landscapes, languages, skin colours, governing parties and political systems, but these factors do no alter the intrahistory of a country seeped in political violence. Human behaviour –in its glory and its misery- repeats itself. Our cinema and our literature are plagued with similar examples, depicting the same situations in different times and different wars. Any brigadista can talk of heroes like the teacher incarnated by Fernando Fernán Gómez in La lengua de las mariposas, or of families like the ones who stoned him when the political tide changed, hoping to save their own lives. We find similar behaviours in Irène Némirousky’s Suite Française, even though it takes place in France during the Second World War. She draws a detailed picture of the different shades of fear during war and persecution. The best and worst aspects of human nature are always on display in moments of extreme violence, and we can see these behaviours repeated around the world. Even though there is nothing new there, PBI still aims to put the spotlight on each and every one of these heroic and creative acts that promote the dignity of the human being; the exemplary behaviours of the unknown people we accompany, in order to make them precisely that: examples. Examples that help in making peace and human rights possible.

The brigadistas could give you the personal name of each of these people who are there resisting. People with whom they lived, sometimes admired and with whom they have even established a personal bond, after sharing hours, days and weeks.

Today I proudly see how PBI continues to set its focus in the most significant causes in each country and each moment, making it possible for the local people to work their land. The local people who are fighting for what is theirs: their land, their water, their crops, their clean air; their people.