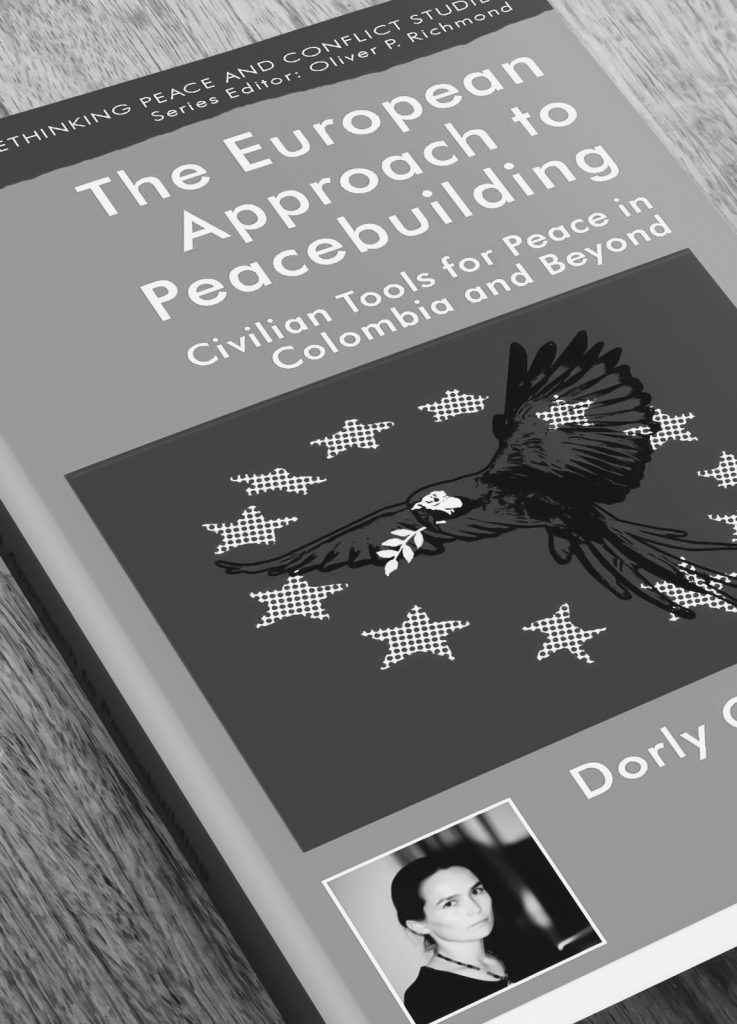 Colombia is one of the countries in which the Euopean Union has been working for years in peace programs, but the role it has played in the resolution of the conflict has been criticized and has laid bare its limitations as a peace agent. How would you value the EU’s peace strategy in Colombia and what role could it have in the conflict’s aftermath?

We talk about the EU’s role in Colombia with Dorly Castañeda, doctor in Political Science and International Affairs who has worked with organizations from the civil society and the Colombian government. She is now a counsellor in peace building for the World Bank and she has recently published The European Approach to Peacebuilding. Civilian Tools for Peace in Colombia and Beyond (Palgrave MacMillan, 2014).

The Peace Laboratories are development programs for the construction of peace that started when there was armed conflict in six of the areas most affected by violence, aiming to promote profound social transformations. The Laboratories were a product of the interaction between the EU, the Colombian central government (mostly during Álvaro Uribe’s rule) and organizations from Colombian and international civil societies. It had a budget of 90 million euros during ten years, an insignificant amount in terms of national public investment but very valuable in local-level political initiatives. The present program of New Peace Territories is based on the experience of the Peace Laboratories to support peace-building processes in four strategic regions. The European budget is of 30 million euros in five years.

Has the result been positive?

The main achievement of the Laboratories has been in giving support to processes started by the civil society in areas where the democratic state is hardly present and that could have disappeared in the middle of the war. That and having promoted dialogue with public institutions. In other words, specific actions – productive, education, health or formative projects – the Peace Laboratories managed to bring closer two vital yet antagonistic actors for peace in that era: the organizations of the civil society in war zones and the Sate’s institutions. But the EU fell short of its goals. The Laboratories generated many expectations in these regions, in the civil society organizations, in the government, among the donors, etc. and the EU failed them all. That goes to show its capacity for building bridges but also its failure when it comes to taking a firm stance. For instance, nowadays, the experience of the Laboratories has been crucial in the implementation of Habana agreements and the EU doesn’t seem to be capitalizing on its ten-year experience.

There has been criticism about the EU’s role in Colombia based on the fact that it has a limited capacity, with a low profile, based only in cooperating in its development (a payer more than a player). Does the EU have its own peace strategy in Colombia? Does it have a coherent policy?

If by coherence you mean that commercial policies, defence, diplomacy and development cooperation are coordinated to achieve peace in Colombia, the answer has to be no. This would be what you’d have in an ideal scenario, but that is not the case in Colombia or anywhere else in the world. There has, however, been clarity in one aspect: the EU supports the peace process with civil means; it has always stated that it aims to build a peace based on democratic principles and civil instruments like economic development. It’s a position based on European values and the EU’s raison d’être.

There has also been criticism about how European cooperation has brought negative consequences and conflict in some regions, because it didn’t take into account the nature of their pre-existing social structures. Up to what degree do you think this has been so?

It’s true that European cooperation has been criticized for not respecting the local tempos and the internal functioning of some organizations. There are two reasons: the abundance of strict procedures in the execution of the programs of Official Aid for Development (AOD) and the incompatibility of the tempos of the donors with those of the populations. And, even if it may sound contradictory, these difficulties are a consequence of how the cooperation policies were established. In the late 90s, European cooperation did not have strict regulations, allowing it to adapt to national and local circumstances. This flexibility, however, brought with it scarce transparency. Later, with Prodi’s and Barroso’s reforms there was an increase in transparency but a whole range of procedures were introduced, with the subsequent loss in flexibility. This rigidity marginalized many local structures that had received support before, while also redirecting the efforts of the people in charge of putting the programs into effect.

What has been the relation between the EU’s strategy (as a commission) and th0se of its member states?

International cooperation has to be understood as an instrument of foreign policy and, as such, the defender of the interests of a “nation”, and in this case this “unidentified political entity” is the European Union. The member states still use the AOD to suit their own national interests. This is obvious in Colombia, where the countries with a stronger presence (Germany, Spain, United Kingdom, Holland, France, Sweden) did not contradict the EU policy but they did not coordinate with it either or present itself as a unified block to the Government of Colombia.

The EU says it is worried about the violence and the violation of Human Rights in Colombia. Other than giving diplomatic support to the Colombian government, should it have a more active role in the on-going peace process?

The communiqués of the EU’s council, its Parliament and its High Commissioner have an important symbolic value; it’s true that they do not bring changes on the ground but they do support the defenders of Human Rights, the social organizations, the minorities or the public policies that try to achieve peace through peaceful means. It is a way of giving voice and empowering the people and the policies that promote peace. The EU has participated in other peace negotiations and in the agreements reached there (Middle East, Philippines, Indonesia, Sudan). But it can only participate in peace talks if it is invited to the table and, up until now, the Colombian government has not invited any country –or actors like the EU, the OEA or even the UN- to have a seat in the negotiations. It has however made constant pleas for support in the implementation of the eventual accords. The EU could play an important role there.

Being things as they are, can we consider the EU as a relevant actor in international peace negotiations?

I think we can. The UE is a relevant peace actor, destined to support peace in different scenarios. The difficulty is for the EU to step up to this role, but it has the civil instruments to help in the different peace efforts now in place. And it is in the civil aspects where the EU’s added value lies, not in it’s capacity for military response.

Its internal difficulties – a sui generis actor in politically complex foreign affairs – are an obstacle to this role as a peace agent?

Yes and no. Yes, because it makes decision-taking slow and it limits its capacity of reaction. And no because its advantage in relation to other international actors is the UE’s uniqueness as a commercial associate, donor and an organization of multiple states.

Is political integration in Foreign Policy and Defence a necessity for the EU?

Integration would make it easier to define a focus in peace building and would allow the EU to react accordingly to the changes in local conditions. It is however not a necessary condition for the EU to act with the instruments it already has at its disposal.

And going back to the Colombian case, can the EU be a relevant actor in the aftermath of the armed conflict?

Most definitely, the EU’s experience in Colombia will be extremely useful in the aftermath of the conflict. Nowadays, if you look at who is present in the regions with a sufficient capacity to support the implementation of peace agreements, there are the organizations of the civil society (by themselves or with public institutions) that have received the support of the EU at some point, with its cooperation programs. For instance, the Programs of Peace and Development undertaken by the Peace Laboratories and now the New Peace Territories could now become key actors in peacekeeping in the regions. The way the EU managed to create spaces of a dialogue between the civil population, the organizations of the civil society and the central institutions – and in some cases, local ones as well – has left many useful lessons for the donors and the government. Furthermore, with the treaty of free commerce, there can be long-term perspectives in one of the most critical aspects of the conflict’s aftermath: the creation of employment.

How do you value the present perspectives of an end to the armed conflict?

The negotiations with the FARC in Havana and the potential negotiations with the ELN guerrilla are an opportunity to downscale the armed conflict, strengthen democracy and launch the reforms that are necessary to level the inequalities in the country while generating a sustainable development. Never before had negotiations with the FARC gone this far and the structure we have put in place seems to work. It’s normal that there are moments of crisis like the present one, because not all the fractions within the FARC support the dialogues and – in the same way – not all of the government agrees with what is happening in Havana. Despite all this, I think the process is on the right path. However, a peace agreement in Havana will not lead to the end of armed conflict in Colombia. The armed conflict involves multiple national and international actors who will not lay down their weapons after the dialogue with the guerrillas. These actors include the so-called criminal bands (BACRIM) at the service of illegal economic markets (drugs, gold, emeralds), the narcos, dissidents within the guerrillas, etc.

Despite all this, are we closer to peace in Colombia?

In order to build peace we require a drastic change in how the central government deals with the regions. The aim is to establish the conditions that will allow the construction of a democratic state from the regions. And this is what the negotiation in Havana is about: how to do an institutional change that will strengthen direct democracy, diminish inequality and bring the two Colombias closer: the prosperous Colombia who wants to be a member of the OCDE and the poor Colombia that’s deeply scarred by five decades of armed conflict. The road is long and it also requires mid and short term actions like disarmament, demobilization and reintegration, reparations to victims, the strengthening of security, the creation of jobs, an improvement of justice; with the clear long-term perspective that will lead to the change of the game rules that make the cycle of violence endless.

– Cover of “The European Approach to Peacebuilding. Civilian Tools for Peace in Colombia and Beyond” –