The EU’s sanctions and their contribution to peace 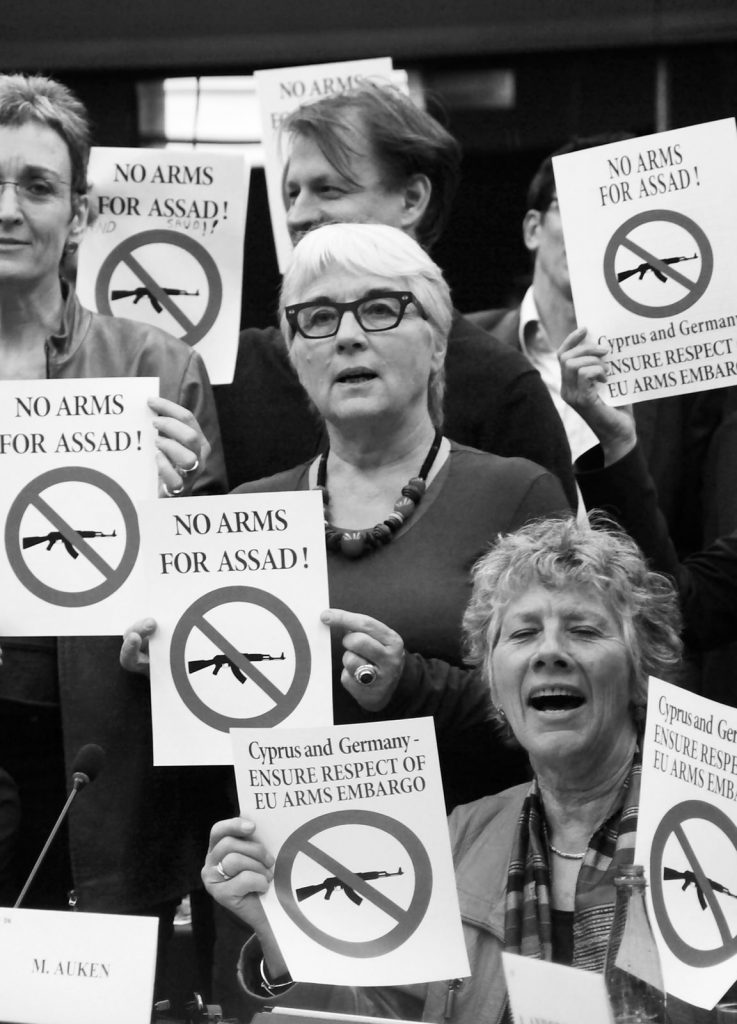 The use of sanctions as a multilateral instrument has always been linked to the preservation of peace. As early as 1919, just after the First World War had ended, the US president and founder of the League of Nations, Woodrow Wilson, saw sanctions as an alternative to war, making the use of force unnecessary. This vision was clearly defined in a famous epilogue written in 1919:

“Apply this economic, peaceful, silent, deadly method and there will be no need for force. It does not cost a life outside of the nation boycotted but it brings a pressure upon the nation which, in my judgement, no modern nation could resist. ” 1

However, the use of sanctions by the League of Nations was very limited and it didn’t contribute to any crisis being solved, while the United Nations only imposed sanctions in two occasions in the first 45 years of its existence, due to the stalemate in the Security Council during the Cold War2.

It would not be until the end of the Cold War that sanctions would regain their role as a multilateral instrument for international security and the promotion of peace. In the 25 years that have gone by since 1990, not only has the use of sanctions exponentially increased, they have also diversified to include objectives as diverse as the non-proliferation of nuclear weapons or the fight against terrorism. Their role has also been refined with the use of intelligent sanctions, concentrating their effects on the individuals and the elites responsible for the policies that the sanctions want to condemn, stop or correct, thus avoiding the suffering of innocent people.

The EU and the use of intelligent sanctions

Since the 1990s, the European Union (EU) has emerged in the international arena as a promoter of peace and regional stability, and in thus doing has made ample use of intelligent sanctions3. The sanctioning practices of the EU are of two types: on one hand, the EU implements the sanctions approved by the UN’s Security Council, while, on the other, it imposes its own autonomous sanctions. Even if the EU has been implementing sanctions since the 80s, this practice has gradually increased since 1991 (see graphic).

Furthermore, the EU has committed to use intelligent sanctions. These measures include embargos on weapons sales, the prohibition of visas and freezing of accounts held in European banks. In fact, most of its sanctions are within this three-pronged attack, even if other measures have recently been incorporated.

The EU is the most active regional organization in the imposition of sanctions, followed –by some distance- by the African Union (AU) and the Economic Community of Western African States (ECOWAS). The EU’s pre-eminence in this policy is easily explained by the fact that the EU is the most developed regional structure and the only one with mechanisms that can be used in a coordinated foreign policy, while other regional organizations will only act when their own members go against the principles of the organization4. Even further beyond the effects the sanctions may have on their objectives, the use of sanctions consolidates the EU’s role in foreign policy and it has become a part of its identity as an international actor.

The contribution of sanctions to peace

We can identify three mechanisms by which sanctions mitigate, limit and even help to put an end to armed conflicts.

The first one is that sanctions reduce the resources that are necessary for an armed conflict. A clear example of this is the embargo on the sale and supply of weapons in high-risk zones. This measure helps to limit the supply of arms or, at least, to make them considerably more expensive in the black market. The EU has often used this measure, like in the former Yugoslavia, Sudan, Sierra Leone or, more recently in Syria and Libya. Another measure that is often used is the limitation in the provision of technologies and technical assistance and the sale of objects or materials of dual use that could be reused in a conflict.

A second mechanism is to limit the resources available to finance the conflict. This implies a control on the sale of natural resources like petroleum, coltan or “blood diamonds”, resources that will help finance the purchase of arms, supplies and mercenaries. On one hand, the EU has contributed to the regulation of markets like the one involving blood diamonds with its support of the Kimberly process, aiming to certify the origin of the diamonds and to control their sale5. –On the other hand, the EU dedicates abundant resources to fight against the laundering of money obtained through the sale of illegal natural resources. On the other hand, the EU pressures people or entities involved in a conflict by freezing their financial assets in European Bank accounts. Finally, the EU controls the movements of people imposing restrictions to their visas to impede the movements to and from the EU of people who participate in a conflict.

The last effect these sanctions have is that they generate incentives for certain actors in the affected societies to oppose the continuation of the conflict. The prohibitions and limitations imposed by the sanctions are often a motive of economic ruin for some and a social stigma for many. The generation of this incentive, however, greatly depends in the creativity in the design of the sanctions. For instance, during the Kosovo conflict, the EU created a “white list” to allow those opposed to the Milosevic regime to continue their trade with the EU and to receive preferential aid6.

Sanctions mitigate, limit and even help to put an end to armed conflicts

Furthermore, the EU tries to employ sanctions to promote peace even in scenarios where there (still) is no armed conflict. We can consider sanctions imposed to promote democracy and Human Rights as an integral part of the EU’s peace policy, since they contribute to prevent or mitigate internal conflicts before they develop a violent nature.

We must not forget that sanctions are an ambiguous instrument. Even if their application is often the prelude to the use of force, as shown in the sanctions that preceded the military operations in Libya in 2011, their imposition can also help to maintain peace. For instance, the sanctions against Iran have been presented as an effort to resolve the Iranian nuclear question without a military intervention of potential rivals. French Prime Minister François Hollande justified these sanctions as a way of preserving peace in the Middle East7. These sanction are considered as efficient because the popular discontent they generated played its part in helping Roshani, the moderate candidate who had promised the sanctions would be lifted, to win the elections. Their success, however, is also related to the fact that, thanks to them, the EU managed to convince the USA and Israel not to intervene military in Iran for nearly a decade.

The efficiency of sanctions tends to be modest. They must always be a part of a wider strategy and be combined with incentives

In other words, the importance of the EU as a generator of sanctions to promote peace is based on the power of its markets and in its power to regulate them to achieve its goals. It must be stressed, however, that the EU has not made use of its economic power in its economic sanctions, prioritizing measures that did not affect the civil population. On the other hand, the recent cases of Syria, Iran, Cote d’Ivoire and Russia have signalled a point of inflection in this policy, with the EU showing more audacity.

The preservation of peace is the UN’s most important power. However, the polarization of institutions often contributes to making its supreme organ, the Security Council, incapable to act. It is in this situation when actors like the EU make the difference in the achievement of peace.

At the same time, we must be aware of the limitations that sanctions have in international politics. The efficiency of EU sanctions tends to be modest, because they can be easily avoided with the intervention of other actors. Due to this, and contrary to what Wilson suggested nearly a century ago, sanctions are not adequate as a single weapon in a military conflict. Sanctions need months, and even years, to have an effect, while military conflicts take place with extreme velocity8. Sanctions must always be a part of a wider strategy, to be combined with incentives and to leave a margin for the agreements with other regional actors. Bearing in mind the growing importance and audacity of the sanctions policies, in the next decade it will be important to invest more material and intellectual resources to increase their efficiency9.

Even if sanctions do not always manage to avoid the armed conflict, at least they make its development more complicated or limit its area of influence. We must also bear in mind that the utility of sanctions is not only in avoiding, limiting or resolving armed conflicts. They mould the EU’s identity as an international actor and they define the limits between what is acceptable and unacceptable in international relations.

9. Vries, A. de, Portela, C. i Guijarro-Usobiaga, B. Improving the Effectiveness of Sanctions: A Checklist for the EU, CEPS Special Report, Nr. 95, November 2014.