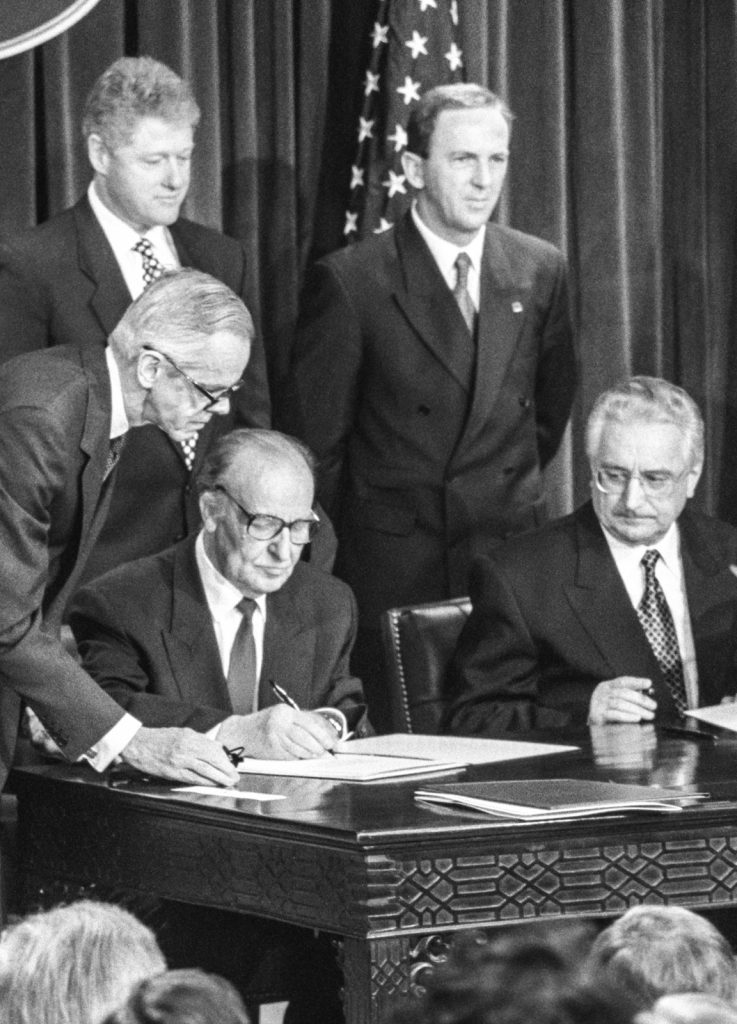 “It was a superb agreement to end a war, but a very bad agreement to make a state.” This quote by British diplomat Paddy Ashdown is undoubtedly one of the most famous and accurate definitions of the Dayton Agreement, signed in December 1995, which put an end to the war in Bosnia and Herzegovina. The aim was to establish conditions for immediate peace, stability and security following a conflict that had caused at least 100,000 deaths and over two million displaced persons. Even Richard Holbrooke, chief US negotiator at Dayton, admitted that the accords were designed to end the war at any price, but were not expected to hold up. Nevertheless, the constitutional framework of the country still adheres to Annex 4 of the agreement.

The Basis of Ethnocracy

To reach a compromise that would satisfy all the warring parties, the new constitution established a de facto federal and consociational framework. The country was divided into two entities, the Federation of Bosnia and Herzegovina, and the Republika Srpska, which were granted exclusive sovereignty in key areas (social services, education, infrastructure and police). The Federation, in turn, was divided into ten cantons along ethnic lines (five with a Bosniak majority, three with a Croat majority and two with mixed population) and enjoyed extensive autonomy in key areas such as education, health and justice. The central state was left with little power and few resources, and an institutional structure based on rigid ethnic quotas: a tripartite rotating presidency and a parliament divided according to the national clubs of the three “constituent peoples” (Bosniaks, Serbs and Croats), each with veto rights in so-called vital issues. The central state was even deprived of a clear institutional name, and was simply referred to as “Bosnia and Herzegovina”: Serb representatives demanded the elimination of the term “Republic,” which was to be reserved for their own entity in order to ensure a symbolic status of alleged statehood.

Many argued that the consociational system would gradually lead to stabilization and a readjustment of powers, but that has not been the case.  Twenty years later, the few institutional changes have been the reunification of the Central Bank (1997), of the police special forces (SIPA, 2002) and of the Armed Forces (2005). Bosnia still has fourteen governments and parliaments for just over three and a half million people: an extremely dysfunctional and expensive structure which fuels inefficiency, division and frustration. The objective of guaranteeing the return of displaced persons was not achieved, either: the territories are for the most part ethno-nationally homogeneous except in limited areas where international agencies strongly intervened.

From “Dayton 2” to Sejdić-Finci: Dead Ends

There were two attempts to reach a “Dayton 2”, i.e. a constitutional reform supported by the United States and the European Union.  It was in 2006 (the so-called “April Package”) and in 2009 (the Butmir negotiations), but both failed.  They consisted of a slight -but not negligible– reorganization through several steps: one president, shared state-entity powers, and the strengthening of the state government. However, these initiatives were late for two reasons.  First, the international military forces were already in the process of leaving the country and could no longer be a deterrent to any local tensions. Second, the elites of the ethno-nationalist parties have been adapting to the Dayton structure and the economic and power benefits that it guarantees. The failure of 2006 is symptomatic. When almost all the political forces had agreed to the reform, two nationalist parties, one Bosniak (SBiH) and one Croat (HDZ 1990) suddenly hardened their position and withdrew their support, possibly to capitalize on the elections to be held a few months later.  Promoting a reform that needed broad consensus in an election year was another key error of that process. That is when the main Serb party, Milorad Dodik’s SNSD, quickly began radicalizing, leading to revisionism of the war crimes of the 1990s and repeatedly threatening (right up to the present day) to hold a referendum on the secession of the Republika Srpska. At the same time, Dodik’s hegemony in the entity was being strengthened, and he has been in firm control of the administration, economy and media up to the present day although his position has been slightly weakened after the 2014 elections.

“The fracture in Bosnian society is not only between three constituent peoples, but rather between two classes: the “ethno-political business people,” and the mass of powerless citizens”

Another key point is the 2009 Sejdić-Finci judgment of the European Court of Human Rights, which condemned Bosnia and Herzegovina for not respecting human rights in its own constitution, created as part of the Dayton Agreement: the Presidency and the Senate, being reserved for the three “constituent peoples,” exclude those who do not recognize themselves as such, as well as national minorities. As a result, the process of integration into the European Union came to a standstill until changes were implemented in the electoral system. But, in these seven years, instead of stimulating an innovative and civically respectful reform, the Sejdić-Finci case has reinforced the stalemate between the nationalist parties in power. These parties have only been capable of mutually vetoing each other and coming up with proposals that are even more sophisticated and absurd than the current status quo.  In order to address this situation, the European Union adopted a more flexible position on the issue in 2014-15 and in fact removed the “conditionality” of the Sejdić-Finci case to advance integration, and prioritized the stimulation of neoliberal economic reforms (the so-called “Compact for Growth”). Many stress that geopolitical concerns, such as the potential threat of Islamic radicalism and possible Russian interference in the Balkan region, have influenced this shift in the EU.

But today, the fracture in Bosnian society is not only (or not as much) between three constituent peoples, but rather, as Sarajevan political scientist Asim Mujkić 1 noted, between two ethnically cross-cutting classes: the “ethno-political business people,” and the mass of powerless citizens. The ethno-political business people are those who managed to take control of the processes of privatization and distribution of positions of power in the 1990s.  In the early postwar years, they ensured the consensus of citizens through the dissemination and capitalization of existential fears (as if “voting for my nationalists means protecting my biological survival that would otherwise be in danger,” explains Mujkić), and today thanks to the material benefits provided by the same Dayton ethnocracy. In data collected by Jessie Hronesova 2, Bosnia and Herzegovina is the country with the most political parties per capita in the world; almost one out of every two families has a direct relationship with a political group. This makes voting for ethnic parties a rational option that guarantees access to the necessary contacts to obtain employment or social benefits in a context of extreme economic hardship.  It should be recalled that real unemployment is estimated to be just under 30% and is over 60% among young people.

“The social mobilizations have marked the first open challenge to ethnocracy in post-Dayton Bosnia. It remains to be seen whether we are facing a change of perspective”

There have also been signs of mobilization in civil society in distinctly non-ethnic terms, with three key moments: the Picin Park protest in Banja Luka in 2012, to defend a public park where ethno-political business people wanted to build a residential center; the “baby revolution” in Sarajevo in 2013, led by parents of babies who could not obtain their identity documents because of disagreements in Parliament; and, especially, in February 2014, the protests that started in Tuzla by workers in factories that had gone bankrupt due to failed privatization initiatives, and which surprisingly spread spontaneously to several cities (including the capital, Sarajevo) where protesters were involved in violent clashes and attacks on institutional buildings. These demonstrations have not had much continuity, but they have marked the first open challenge to ethnocracy in post-Dayton Bosnia. It is worth mentioning that the movements that emerged from the 2014 protests, the so-called “plenumi” (self-organized assemblies), have focused their attention on socioeconomic issues (reviewing privatizations, eliminating privileges, fighting corruption, redistributive policies) and have deliberately avoided touching upon the subject of the Dayton reform, apparently to try to “de-ethnicize” public discourse and seek broad consensus in the various regional and national contexts. As has been mentioned, the European Union’s recent shift in focus (which, incidentally, came after the protests) in its policy regarding Bosnia follows the principle of “first, the economy,” but with a radically different proposal from the one defended by the plenumi; the EU proposal focuses on cuts in the public sector and labor market deregulation. Even some nationalist parties, in the 2014 campaign, seem to have perceived these signals, mitigating the usual narratives and focusing more on socioeconomic issues. It remains to be seen whether we are facing a change of perspective, a “post-post-Dayton” where political discourse becomes “de-ethnicized” and competition moves to the economic field, and then, perhaps at a later stage, leads to agreements on constitutional reform. But until some new factor emerges in the heart of ethnocracy, such as an alternation between parties, or a generational change within their elites, or perhaps the definitive emergence of social movements, this change is very difficult to imagine.

1. See the article ‘In search of a democratic counter-power in Bosnia–Herzegovina’

2. See the article ‘Bosnia –voting for the evil you know’