The impossibility of reconciliation in Bosnia and Herzegovina 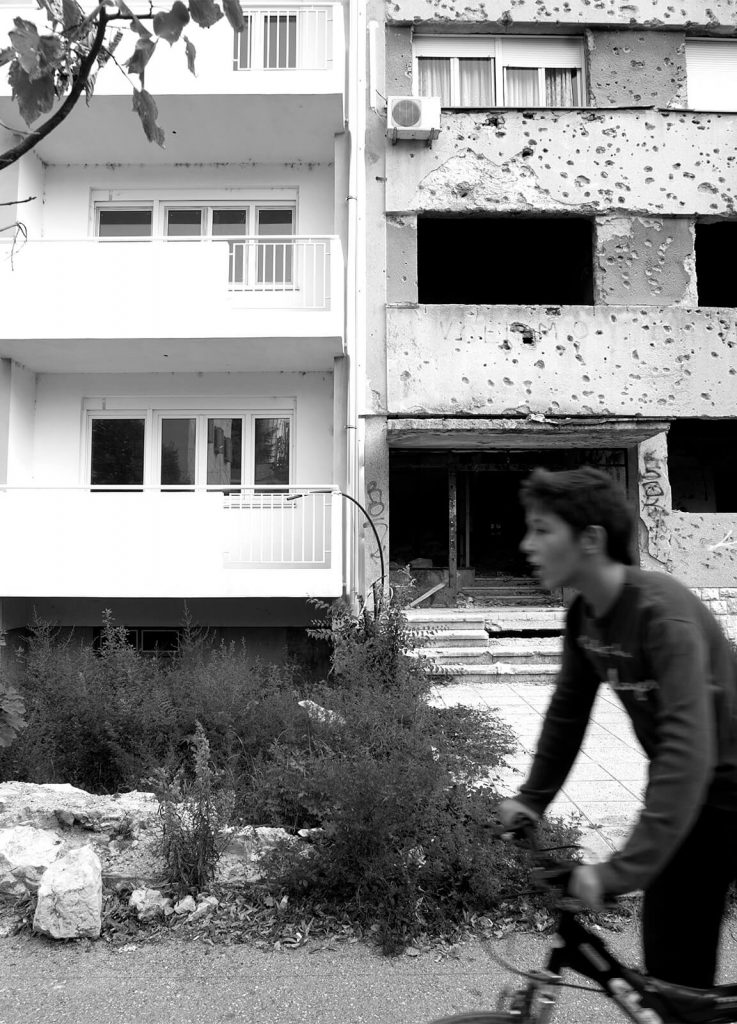 Reconciliation is truly something out of ordinary. Peace is out of ordinary, as well. Understanding reconciliation as a term only, etymologically defined, would lead us to its acceptance as something ordinary, typical. Reconciliation is much above; it means more than bringing back together, it should be seen as a complex process that brings society from the end of the war to the peace. The end of the war is a point where all violent conflicts are terminated, while the peace is quite opposite reality and it means absence of any kinds of violence. Ending the violent conflict by ceasefire, peace treaty or by overpowering the opponent provides peace, but only negative one. Reconciliation is a process that could transform negative peace to real one. Although reconciliation can be analysed on a level of bringing two individuals back together, this article will pay attention to reconciliation as social phenomenon.

In order to see what reconciliation is, it’s important to see what it is not. It can’t be perceived as tolerance, because of passivity of tolerance: “I tolerate you, I don’t want to remove you but I don’t mind if something else removes you”. Spending time together with those from the other side is positive, it can contribute in peace-building but it is not still reconciliation, especially if we are returned back in our bubbles of comfort, afterwards, without any change. To reconcile doesn’t mean to unite, it doesn’t mean to become same as the other one and it doesn’t even mean not to be in conflict anymore. It’s legitimate to be opposed, to have different perception of the reality. Reconcile doesn’t mean to forget, neither. Finally, reconciliation is not part of legal system, of trials, verdicts or punishments, although it can be related.

Understanding reconciliation as a process toward peace is fine, but understanding it as a process to the peace is much more challenging, it defines reconciliation as impossibility, but in the same time it opens door of genuine motivation to pursue the real peace. Reconciliation should not be a process that goes next to us, it has to be part of us, everyone should take part in it, proactively, engaging himself or herself into it, trying to live within it and to live it. Only that way we can understand reconciliation as impossibility, and we can work on accomplishing the impossible. To bring it to very personal level, if we firmly and honestly decide we want peace for us with others and we want peace for the others, as well as if we are proactive in achieving this, only then we are doing reconciliation. If we perceive it as ordinary, we condemn ourselves and our community to the vicious circle of negative peace and hidden violence. Reconciliation is not acceptance, reconciliation is undertaking, it means to be brave, to take a risk, to be ready to go through the change, to accept you will be changed.

Usually, reconciliation comes between two or more sides. In the case of Bosnia and Herzegovina (BiH) there are even three sides. Three ethnic groups identify themselves as Bosniaks, Serbs and Croats. Very important factor for these identities are religious affiliations, three of them. Majority of Bosniaks declare as Muslims, Serbs as Orthodox Christians and Croats as Roman Catholics. Since Dayton agreement from the year 1995 those groups live in Bosnia and Herzegovina, people suffer in negative peace, although being out of armed conflict, they lack real, positive peace.

It is obvious whom to reconcile, but we should try to understand what was wrong, as well. The answer is hidden in, at least six centuries of history. It’s very difficult to discuss past and even harder to look for the truth, so I will focus on present projection of the past only. The fact is that each of three groups is seen as a victim of another one, at least once in history. Correspondingly, each group is recognized as perpetrator at least once, each group seems to be guilty at least once. Furthermore, these ethnic and religious groups’ borders in the perception nowadays are very fluent, so different empires, kingdoms, states, nations or nationalities and their everlasting sins are resurrected in Bosniaks, Serbs or Croats. In the last six centuries the periods of wars and ‘non-wars’ exchanged, but there was never the period of real peace. While periods of wars were used to trot out all hatred and animosity, the periods of ‘non-wars’ were excellent to breed, grow and revamp negativities from before. Each time, it was darker, scarier, bloodier and more beastly.

Is it right time to finish it? – it has to be! The civilization has reached stage where it has to be done. Peace studies are growing since World War II, interdisciplinary approach to the problem analysis creates more opportunities for reconciliation and the world possesses weapons to destroy whole planet several times. Enough arguments to abolish any kind of war. If we understand reconciliation as a process to the peace and reconciliation as undertaking actions, it puts responsibility on us to be proactive and make reconciliation in Bosnia and Herzegovina.

Reaching peace in Bosnia and Herzegovina means constant battle with windmills. Or not? If we have to fight windmills, it means they are rotating. They are rotating because there is a wind. So, looking at Chinese proverb “When the wind of change blows, some people build walls, others build windmills”, we see that instead fighting windmills we can build our windmills and use the same wind for a change.

Each side enjoys considering itself as a victim of the other one rather to see everyone as victims of the war. Making sides equal would mean to give up of presenting your group as biggest victim and give up of presenting the other as guilty. Trying to accept your group’s responsibility is strongly opposed by menacing words “don’t try to equal their atrocities with ours”. Bosnia and Herzegovina had hundreds small wars in nineties, on different locations, with different sides engaged and with different goals set. Each location tells different story and depending on location and period of war, each side had been fighting other two. Killing, torturing, raping, exile, deterrence – it is part of memory of everyone in BiH, if not directly, then through others’ stories. Violence burden past creates present loaded with fear and distrust, generally toward the other group. The reality is locked in sentences as forgive, but not forget and don’t let it happen ever again to us. The others are seen as potential threat, if not right now, then will be soon.

Ethnical cleansing created many mono-ethnic communities, separated from each other, an excellent ground for nationalistic narratives to flourish. Narratives representing the others as villains, aliens with genetic mutations, either obvious tyrant or cunning mole who lurk an opportunity to attack. Obvious segregation works in line with narratives, thus dehumanizing the others.

Mental health is also an issue. Beside trauma from the war, people go through soft trauma living negative peace. Apathy, together with learned helplessness, kills any motivation to make change. Tripartite political system works only as catalyst for segregation and violence, thus not helping individuals to do a change, to turn negative peace to real one.

These problems and reconciliation setbacks are present in other parts of the world; proper nouns are different but the story behind them is quite similar. Looking at those facts, it brings us to the point where reconciliation becomes impossible. In the same time, if situation is not changed, the future will bring more conflicts and more wars. It creates responsibility to act, to create better society for our children.

Reconciliation won’t come itself, it requires deed and effort. Understanding and acceptance of impossibility for reconciliation will force us to create different paths, to be creative

Youth are considered as the most powerful protagonists of reconciliation. They are brave enough to make a step out, to try something different. They are fine even if they fail, and still have motivation for another try. Hope inside them win over fear, still. Although they have heard stories of their parents, they have no direct violent trauma. Finally, if they see their authorities as faulty, authority in family, ethnic or religious group, some of them won’t hesitate to disobey it, or even confront it. They are creative enough to design their windmills to create world better place to live in.

Although reconciliation should be done on various levels and with different groups of people, reconciliation and youth in Bosnia and Herzegovina works well. If youth are encouraged to try something out of ordinary, they will do it, they are still curious, willing to make a move which is strongly not recommended in their community. When they do it, they discover banality of that prohibition, behind the curtain of distrust they find individuals very similar to themselves, sharing same problems, wishes, fears, sharing reality of young person. Such encounter, although seen as trivial, makes a change. They know how to ask question why, either because they want to have critical thinking, they are just curious or even just want to defy others. By trying to answer that question they enter in a vortex that creates possibility to come out stronger and wiser. Either they manage to do it by themselves, or they get help, they can discover a lot.

Reconciliation processes with youth, either are indirect, spending time together, or direct, through activities of dealing with the past, sharing painful memories, pursuing the truth, result with mutual understanding while identifying personal experiences in others’ stories. In steps toward reconciliation, it is vital to find a victim of vicious circle of hatred and distrust on the other side, not a monster from a childhood stories. If young person can hear and understand the other side, a link is created. That link recreates trust which means a huge step toward coexistence and reconciliation.

Living in absence of real peace means suffering. The peace should be everyone’s goal. Having peace as a goal only, is not enough. In order to ensure better situation for next generation, everyone has to be proactive, to work on reconciliation. Reconciliation won’t come itself, it requires deed and effort. Understanding and acceptance of impossibility for reconciliation will force us to create different paths, to use imagination, be creative, to build new windmills. When we fight for peace, peace that is something out of ordinary, we have to be brave, to be ready to step out, to make a change, to be changed, to succeed, to fail and to try again. We have to believe in it, to live it, only then, we are ready to experience real reconciliation. It’s difficult, true, but it’s worth.

Photography: Photo of the exhibition “Living on the Edge”, by Marco Ansaloni and Angelo Attanasio, produced by ICIP. Author: Marco Ansaloni