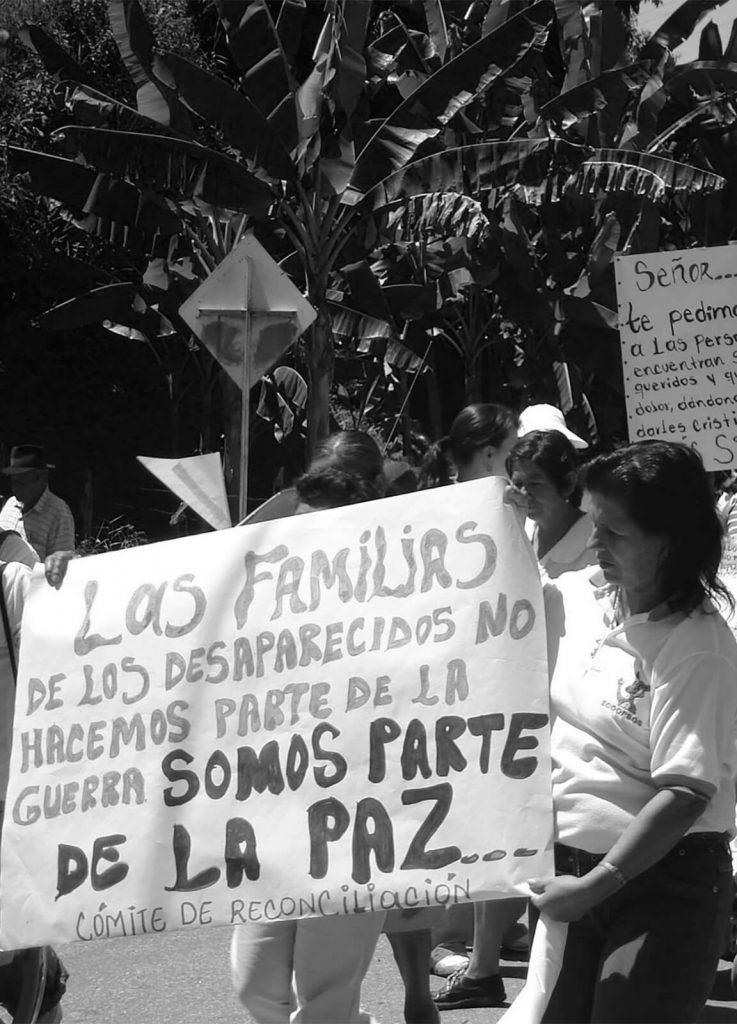 For years, the horror of war converged on the small Colombian town of San Carlos. Between 1998 and 2005, 18,000 of its 25,000 residents fled the town. There were 1,250 homicides, 33 massacres, 210 forced disappearances and 12 victims of sexual violence. Now, decades later, the people of San Carlos live together in harmony. Victims and victimizers share spaces and recover their quiet life. Their struggle for memory and reconciliation has been exemplary, thanks to the work of the Center for Rapprochement, Reconciliation and Reparation. In this interview, we talk with its coordinator, Pastora Mira, victim of the conflict and architect of coexistence.

How has it been possible in San Carlos to go from the horror of war to a harmonious coexistence?

Where before it was impossible to travel, where lives were lost for nothing, people are returning and coexistence is harmonious despite the day-to-day economic and other difficulties, but without the sociopolitical violence that destroys us. A lot of work has been done on both sides, and commitments have been made, to try as much as possible to help each other, to meet everyone’s basic needs, to accompany the victims of the conflict.

Reconciliation implies addressing the past, developing a shared vision of the future, breaking with the culture of fear and distrust… Have these requirements been met in San Carlos?

Absolutely. Reconciliation is a set of actions that allows those on either side to look each other in the eye and walk together. But in addition to listening to and looking at each other, reconciliation is also about thinking of and generating conditions for survival, creating productive strategies for the community, and participating in the reconstruction of the memory of what happened here, all together, without demonizing or feeding hatred or revenge, without morbidity – in fact, just the opposite – to avoid the repetition of the events. Memory must be addressed with total respect for the other, and this is what has been done in San Carlos. When we speak of harmonious coexistence in our town, it is because these actions have been accomplished.

Has it been possible to build a common narrative?

In such long conflicts memory is not built from one day to the next; we are working to achieve a memory that is consistent and respected by all, and that does not allow the events to be repeated in new generations.

In this endeavor, have you received the cooperation of the national authorities?

The National Center of Historical Memory has helped us document the events and the history of the armed conflict has been told in the book San Carlos: Memory of the Wartime Exodus. But it has basically been work done by the community, a citizen initiative. Even during the war years we mobilized to promote actions to end the conflict, and that is how the Center for Rapprochement, Reconciliation and Reparation (CARE, in its Spanish initials) was created, and which for us has been a meeting place.

Reconciliation is a set of actions that allows those on either side to look each other in the eye and walk together, generating conditions for survival and for building memory

You were one of the founders of CARE. Has the contribution of the victims of the conflict been essential for its success?

The victims have had to bear the brunt of the war and we want to overcome it and improve the conditions that caused it. That is why I decided to found CARE, a care and support center for the victims, so that no one feels excluded, and a center that is also for consultation and documentation.

The center is located in what was known during the war as the Little House of Terror. Why?

It is symbolic because not only must we transform the collective imaginations of human beings and dignify them, but also of places, in order to move forward, build trust and take steps towards reconciliation.

Do these steps towards reconciliation also include forgiveness?

The victims ourselves must create healing conditions that allow us to forgive, to be able to free ourselves and get on with our lives. In San Carlos we have made significant progress in generating the possibilities of returning, of living together, of participating… It is undoubtedly a successful experience

Can the experience of San Carlos be transferred to other towns?

I think so. Inasmuch as communities see that an experience is good, it can work. We sat at a table with demobilized FARC combatants and they came as humans, not as warriors. The first step is to understand that. We do not come here with the armor of warriors or as victims, but as human beings who sometimes make mistakes. And everyone must acknowledge their mistakes.

War is a monster that, wherever it goes, does not look to see if it attacks children, men, women… The monster attacks indiscriminately

Colombia is experiencing a post-conflict situation where reconciliation and the construction of coexistence are pending challenges. Do you think that the country is sufficiently prepared to face these challenges?

I cannot talk about the country and its 44 million inhabitants; what I can say is that there are places that have made more progress, where we can offer support and show the routes that we have followed in order to enter another phase of the post-conflict era. In San Carlos a few residents decided that it was time for change; that we could no longer continue with an eye for an eye.

Do you feel proud of the work done?

We have been working for twelve years, the experience is very positive and, more than proud, I feel committed. But there are still pending issues. As victims we are waiting for the Search Unit for Missing Persons to begin its work. In San Carlos we need to recover all the missing persons. CARE has identified 210 forced disappearances, but the number may be higher because there are people who have not come to our center. Of these, 48 have been delivered with dignity, based on the justice and peace agreements. But all families have this right. War is a monster that, wherever it goes, does not look to see if it attacks children, men, women… The monster attacks indiscriminately. Now there is a lot of work to do to raise awareness of what we lived through to ensure that it does not happen again.

Photography: Photo from Center for Rapprochement, Reconciliation and Reparation in San Carlos, Colombia.