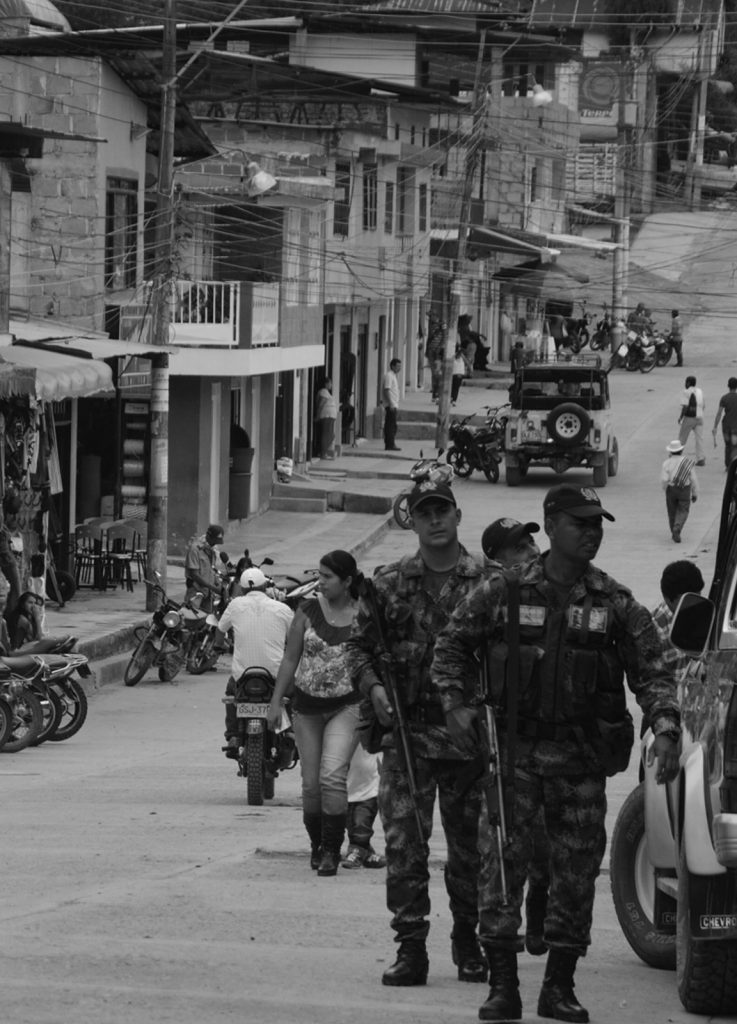 Violence associated with organized crime, and more specifically with the drug trade, is not new, yet it has grown to be more prevalent and noticeable in Latin America, affecting countries that have been traditional locations of drug trafficking organizations such as Colombia and Mexico, but also areas within countries where the presence of criminal groups is less prevalent or more recent, as Argentina or Ecuador. Interest in analyzing this violence has grown among policymakers and scholars, largely motivated by public security crises like that of Mexico since 2007. While scholarship has grown, defining exactly what drug violence is, and capturing its multiple manifestations remains difficult.

To understand drug violence -defined here as violence that emerges in the operation of drug markets- we need to consider the various actors involved as perpetrators and victims, the multiple methods used to carry it out, and the geographic variation that exists. Precisely delimiting drug violence is very difficult. Using narrow definitions that only classify drug violence as that perpetrated by members of drug trafficking organizations against each other or against the state, can minimize the ways in which it affects civilians, is shaped by government actions, and can mitigate or exacerbate other forms of violence. At the same time, using broad definitions can overstate the causal impact of the drug trade.

One key challenge in examining drug violence is the prevalent assumption that violence is inherent to the drug trade, and the overwhelming attention given to extreme situations of violence. Certain locations and events tend to grab most media, scholarly, and public attention. A shootout in the middle of a commercial area or a mutilated body exposed with a note over a bridge, are more likely to generate public uproar, than the killing of street dealers in marginalized urban areas. This bias has often led to ignoring situations where the operation of drug trafficking is relatively non-violent, or where violence is hidden by the perpetrators.

There is enormous variation both across and within countries in terms of how frequent violence is -how many victims it generates- but also in terms of the methods used and how visible it is. I define visibility as a strategy, determined by whether criminals expose or claim responsibility for their attacks. Paying attention to visibility and frequency reveals that places with the most victims of violence are not necessarily those that generate more concern.

To understand drug violence we need to consider the various actors involved as perpetrators and victims, the multiple methods used to carry it out, and the geographic variation that exists

Better assessments of drug violence also require considering public perceptions. For instance, Ciudad Juárez has recently seen a sharp increase in homicides, after about five years of de-escalation since a public security crisis exploded in 2008. Yet some state officials seem to dismiss this escalation as one affecting mostly criminal groups, and the media has given less coverage to it as well. This exemplifies how the attention received by acts of organized violence is often determined by how “innocent” the victims are perceived to be, or by issues such as economic status and ethnicity. Since our public attention is generally directed to lethal violence we also tend to overlook or dismiss non-lethal violence, which often accompanies situations where trafficking groups operate but do not kill frequently. This violence includes forms of oppression aimed at social control, such as the regulation of individual behaviors, or the elimination of people perceived as “undesirables” by armed actors and communities (e.g. drug users, petty thieves, or prostitutes).

Another key dimension to understand drug violence is that multiple actors beyond criminals engage in it, and that their internal power dynamics matter. For instance, levels of violence may vary depending on how organized, centralized, and competitive are the illicit groups involved in it. Dynamics of violence in Peru or Bolivia, where drug traffickers have a relatively low profile and are mostly local and decentralized, are more contained than in Mexico or Colombia where drug trafficking organizations are more organized, powerful, and have clear transnational dimensions.

The state and its actions also shape levels of violence. State complicity with illicit actors can sometimes reduce violence, as occurs when networks of protection are centralized and effective in reducing criminal incentives to expose violence. State policies regarding crime and drugs are also critical. As recent research shows, indiscriminate crackdowns on crime or leadership decapitation policies can lead to increases in criminal violence, as occurred in Mexico. By contrast, targeted policies that attack the most violent aspects of drug trafficking while addressing the socio-economic factors that lead people in the lower ranks to engage in the drug trafficking chain, have proven more effective in reducing the violence.

Besides states and criminal groups, other actors, such as gangs, militias or insurgents, can also enter the equation of violence. Vigilante groups that emerge to confront drug traffickers often worsen the security panorama unleashing cycles of revenge and targeting innocent or marginalized people, as has occurred in Michoacán, Mexico. Drug production and trade can also complicate and lengthen the violence perpetrated by political armed actors, as has occurred with insurgents and paramilitaries in Colombia. Sometimes large criminal organizations use gangs to carry out violence, making it more prevalent, as occurred in Ciudad Juarez when a conflict broke out between the Sinaloa and Juarez drug trafficking groups in 2008. These groups deployed street gangs and violence escalated to unprecedented levels. In other cases the association between gangs and drug trade is not as strong. In Central America many observers assume a connection between the gangs (Maras) and the drug trade, yet the evidence suggests that the connection is not the same across countries. In El Salvador, Maras extract most of their profits from extortion, and their engagement in the drug trade seems to have increased but it is still limited. By contrast, Honduran gangs seem to have clearer connections to the drug trade, and to be overpowered by international trafficking groups.

Understanding the complexity of actors also requires transcending the idea that drug violence mostly affects criminals, and occasionally law enforcement agents or state officials. Violence generated by the drug trade can affect civilians directly and indirectly. To protect their turf, criminals may target civilians whom they suspect to be members of rival gangs or informants for the state or rivals. Likewise, state authorities may target civilians whom they suspect to be criminals or they may victimize civilians simply to show operational results. Civilians can also end up being caught in the cross-fire when criminals and states use force more indiscriminately (for example engaging in street shootouts). Most importantly, low level soldiers of criminal groups who represent the majority of victims and perpetrators of criminal violence are often young people in marginalized communities. Their deaths, while seemingly justified, can tear apart the social fabric of their neighbourhoods.

Certain locations are more attractive for the production, transit and distribution of drugs, and are more likely to suffer violence. Yet, precisely because drug markets and flows are not always violent, a geographic analytical lens requires not only focusing on the physical conditions that make certain locations attractive for the drug trade, but also socio-economic and political conditions. These factors determine variation across and within countries, and can explain why violence tends to concentrate in a handful of locations. By 2017, for example, the four most violent countries in the world were located in Latin America and experienced a clear presence of the drug trade: El Salvador with 60.1 homicides per 100,000 inhabitants; Jamaica (56); Venezuela (51), and Honduras (43). Yet some countries which experience drug flows display low homicides rates as occurs in Argentina (6.3) or Ecuador (5). This variation also applies within countries. In Nicaragua, where homicide rates are the lowest of the Northern Triangle (6.8) the autonomous southern region in the Atlantic coast experiences a homicide rate of 33.

Is it just the drug trade?

Criminal groups engage in multiple illicit, licit, and semi-licit markets. Many prominent non-state violent actors who profit from drug trafficking also engage in human trafficking, extortion, kidnapping, oil theft, and the regulation of agricultural markets among many other activities. Los Zetas and La Familia Michoacana in Mexico are prominent examples of this market diversification, which blurs the boundaries of drug violence. For example, can we classify as drug-related the killing of an individual who refused to pay a protection quota by a gang that also operates as the armed force of a large trafficking organization? Or the killing of 72 migrants by Los Zetas? The answer is no, but we probably miss an important dynamic if we do not consider how the drug trade affects other illegal markets and other forms of violence.

Our understanding of drug violence has expanded, but it is still limited. Scholarly and policy efforts to dissect this phenomenon have to acknowledge that the simultaneous presence of the drug trade and violence does not inevitably signal that drug violence is the driving force of insecurity. Research also requires paying attention to instances where the drug trade is not violent. The label drug related can be misleading if one thinks of drug violence simply as criminals killing each other. But ignoring how the drug trade affects other realms of public security can also lead to omitting key interconnections between different types of violence, different groups, and different markets. Ultimately, the challenge is to combine data sources, research methods, and locations of analysis to move beyond assuming, to understanding violence.