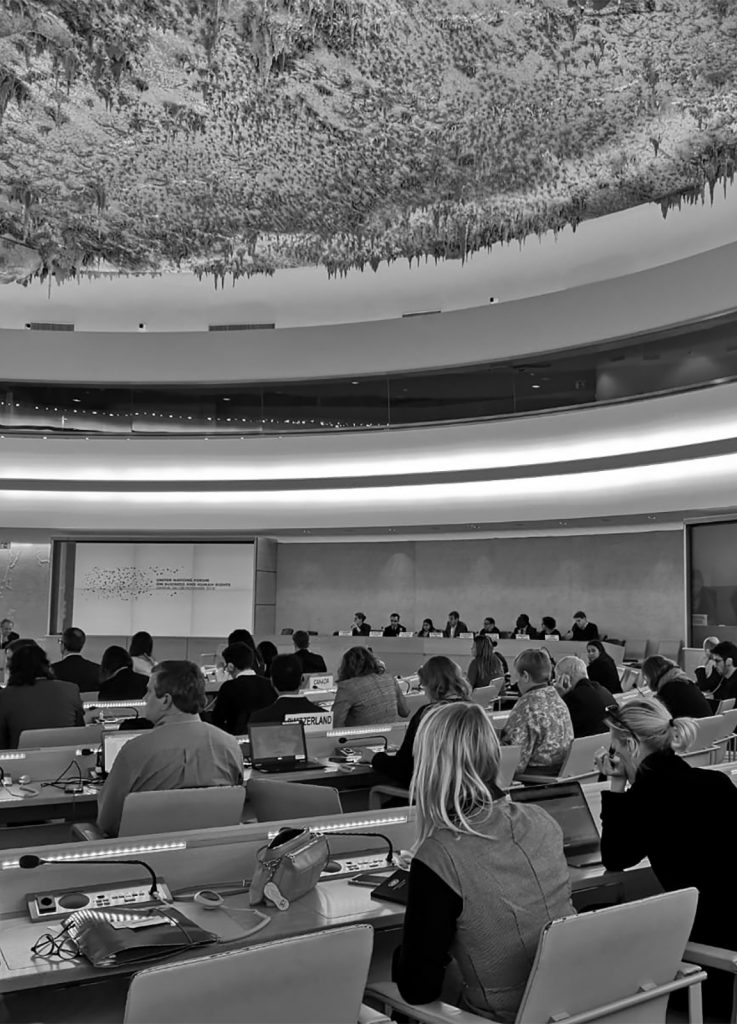 Transnational business corporations are considered one of the main agents of globalization because they concentrate a large part of international economic activity: they act as a means of the universal vocation of capital and integrate, on a global scale, technological production, markets, trade and financial flows, as well as political decisions. In this context, some transnational corporations (henceforth TNCs) establish profit maximization as their main objective and, as a result, community service linked to the public interest takes a back seat within the framework of their praxis.

Transnational business operations often have negative and systemic impacts on people and the environment: child exploitation, slavery, environmental and health crimes, the plundering of resources, the creation of national debt, as well as torture, sexual harassment and abuse are some of the atrocious consequences that occur all over the world in the name of economic globalization and business profits. At the same time, human rights and environmental human rights defenders opposed to megaprojects and extractive industries are threatened and killed by transnational actors, often with the complicity of state forces. In 2017 alone, more than 300 people were killed for protecting the rights of their communities over economic interests.

To understand the current complexity of economic power, it is important to keep in mind that economic globalization cannot be separated from social and cultural globalization. On the one hand, it modifies the balance of power between governments and businesses, as well as between developing and developed countries. On the other hand, it facilitates processes of homogenization driven by Global North corporations that expand and strengthen their influence over local identity. In this respect, the transformations in the relationships between global actors and the consequences of their transnational economic activities contrast with the fact that the protection of human and environmental rights is directed at the states. This results in a series of deficiencies in the regulatory approach to the problem and raises the question of whether businesses should also be responsible for guaranteeing and respecting human rights1

With the aim of making the United Nations human rights and business framework operative, a worldwide code of conduct was adopted in 2011 through the approval by the Human Rights Council (UNHRC) of the “Guiding Principles on Business and Human Rights: Implementation of the UN Protect, Respect and Remedy Framework.” The objective of these 31 principles is to provide a global reference for preventing and coping with the negative impacts that business activities can cause on people and the environment.

In recent years, states have encouraged the implementation of guiding principles through the adoption of national action plans specific to each country. While these instruments are a first approach to controlling TNCs in relation to respect for human rights, they have been criticized for their inefficiency since compliance is voluntary. In addition to the very limitation of the legal corpus, which determines the course of action, corporations create complex supply chains and business groups that complicate the attribution of responsibility.

The dissatisfaction of civil society regarding the inadequacy of these soft law instruments led to the demand for a legally binding treaty. In this context, in 2014, Resolution 26/9 was approved by the Human Rights Council, which established the creation of the Open-ended Intergovernmental Working Group (OEIGWG), despite the total opposition of the great powers and corporate lobbies. The OEIGWG’s mandate is precisely to develop a legally binding instrument that regulates, within the framework of international human rights law, the activities of TNCs and other business enterprises.

Chaired by Ecuador, the intergovernmental working group met three times (in July 2015, October 2016 and October 2017) to discuss the nature and conditions of the binding treaty regulating the activity of TNCs and other types of business enterprises according to international human rights law. In September 2017, the presidency presented the elements for the draft of a legally binding instrument and, in July 2018, the Zero Draft was issued.

In order to address the content of the treaty, the fourth session of the Working Group took place in Geneva from 15-19 October, where it became clear that, three years after the first meeting, the European Union (EU) and other states like Mexico, Brazil and the United States remain reluctant.

The EU representative pointed out that the guiding principles suffice to fight human rights violations and that no additional regulation is required. However, the persistence of corporate violations of human rights casts doubt on this claim. Many organizations and social movements around the world denounce the obstructionist strategy of the EU, considering that it defends the interests of companies over those of citizens, despite having the mandate of the European Parliament urging it to actively participate in the negotiations. As far as Spain is concerned, despite the recent change of government, the policy line that is being maintained is to stick to the European position: to go on not participating, either actively or positively.

In contrast, over 250 organizations from 80 countries participated again this year in the Geneva session as part of the Global Campaign to Demand People’s Sovereignty, Dismantle Corporate Power and Stop Impunity (Global Campaign) 2. And, coinciding with the Working Group events, they organized the “Week of People’s Mobilization” with the hashtag #StopCorporateImpunity, which became a trending topic on social media. Hundreds of NGOs, trade unions, social movements and communities affected by the human rights violations of TNCs mobilized once again to continue pressing governments; to present their proposals so that the base document of the negotiation process has the highest possible standards of human rights protection; to bear witness to the persistence of violations; and to show the strength of the voices of those who suffer the consequences of corporate impunity. The ultimate objective is to try to prevent the negotiation process from derailing the binding treaty.

In the session, the Global Campaign stated3 that the current draft does not include the advances or contributions of the debates previously held. While the draft legally binding instrument is a significant step because it highlights priority elements such as the rights of victims, the prevention of human rights violations, the mechanisms of cooperation between states, and mutual legal assistance, it is not an operative binding instrument. The draft does not provide for the direct obligation of TNCs or an effective international enforcement mechanism; it only proposes the creation of a committee of twelve expert members with the power to make general comments, provide recommendations, support states in the implementation, and draft annual reports. Therefore, it becomes clear that there is an absence of appropriate mechanisms and institutions to hold TNCs accountable in the international arena since their obligations are with national legislations and the international and regional systems are not designed to receive complaints against business enterprises.

There is an urgent need to have a binding regulatory framework for transnational enterprises, with direct obligations on corporations

At the same time, the zero draft legally binding instrument does not include mechanisms allowing for the participation of civil society; it does not include an intersectional gender perspective; it does not contain articles on the role of international financial institutions; nor does it refer to international trade and investment agreements as an impact framework for human rights violations committed by TNCs.

The research, documentation and monitoring carried out in recent decades by international organizations, think tanks, non-governmental organizations and social movements on the social and environmental consequences of the global activities of these business enterprises demonstrates the urgent need to have a binding regulatory framework for TNCs. The obligations of these businesses ought to exist regardless of the existing legal framework in the host states, the states of origin or any states affected, and oblige the entity as a whole, including its supply chains. But the draft treaty declares that states are responsible for the control of the entities’ activities, adopting a modus operandi that has proved to be insufficient. While business organizations, such as the International Chamber of Commerce or the International Organization of Employers, argue that the binding treaty in itself attacks the sovereignty of states and creates insecurity, all of the Global Campaign organizations agree on the need to transcend the Guiding Principles of the United Nations and impose direct obligations on businesses.

It is vitally important to redirect the current focus so that the responsibility of companies and the rights of victims can be safeguarded regardless of the obligations of states, which are conditioned by neoliberal policies of deregulation, privatization and the reduction of public policies. Placing the burden of implementation on states ignores two frequent contexts of obstruction: either states have less power than the corporation they seek to regulate or hold accountable, or they are accomplices – actively or passively – of the human rights violations perpetrated by these businesses.

TNCs should take advantage of their current global management capacity to become active agents of transformation within a framework of global justice. It is precisely the persistent struggle of local communities and affected groups, along with the committed work of dissemination and advocacy of thousands of social organizations, which allows for the current shortcomings in dealing with the architecture of impunity to be pointed out. This same struggle will lead to the end of institutional symbolism, which can be complicit in atrocities and will allow move towards a real change of paradigm.

1. The ICIP has published the monograph “Business and Human Rights” (Peace in Progress, number 30).

2. The Global Campaign is a network of more than 250 social movements, civil society organizations, trade unions and communities affected by the activities of transnational corporations, particularly in Africa, Asia, Europe and Latin America. It is a global structural popular response to corporate power abuses that seeks to facilitate dialogue, strategies, and the exchange of information and experiences in order to provide visibility to the resistance and the support for the struggles against transnational corporations.  The Global Campaign has prepared a version of the Treaty that includes all of their demands.

3. All of the comments and proposals made by the Global Campaign during the fourth session regarding the draft legally binding instrument can be consulted in this document.