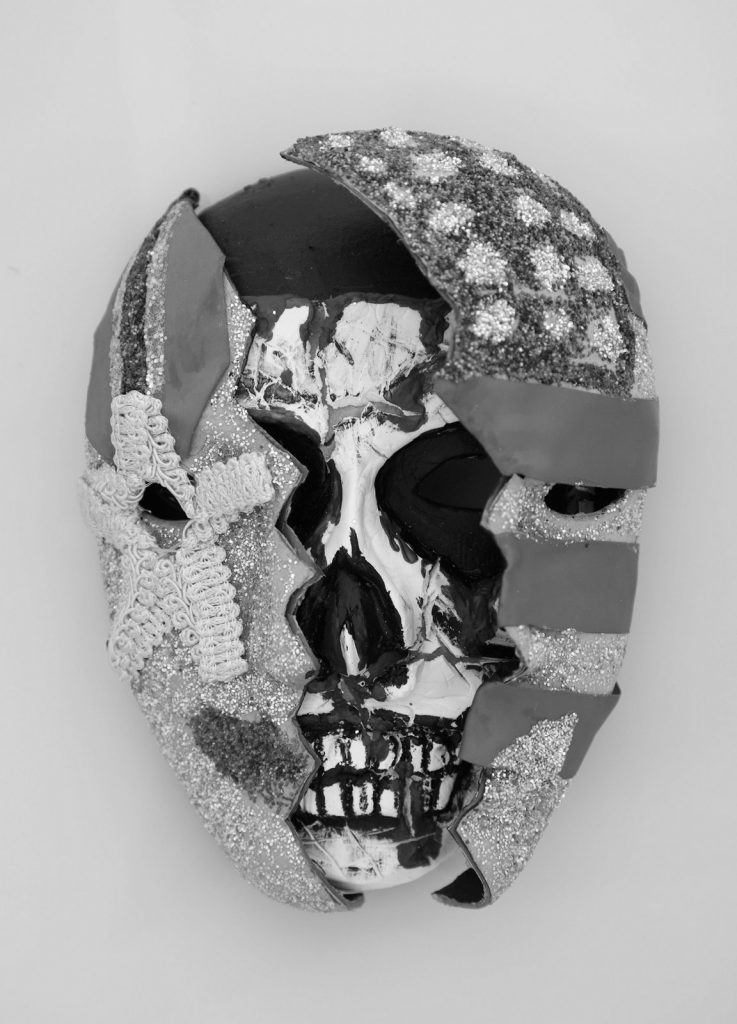 “Although we know that after such a loss the acute stage of mourning will subside, we also know that we shall remain inconsolable and will never find a substitute. No matter what may fill the gap, even if it be filled completely, it nevertheless remains something else. And, in fact, this how it should be.”

Viktor Ullman, a musician who was locked away in the Theresienstadt ghetto during the nazi regime which devastated the whole of Europe, and died in Auschwitz, pointed out that the ability to create runs parallel with the ability to survive. We will not succeed to erase the marks, make the wounds disappear, as pointed out by Freud, but art can achieve, there were the world and the human being are fragmented, feels incoherent and disorganised, to establish a certain order and formal serenity, transfer us to a time, different from everyday life, and help in assimilating the pain.

When looking closely at art, produced in times as harsh and difficult as the ones we mentioned, it is striking how somebody can even create art in moments like that. However, Ullman showed us, just like many other persons who created and helped creating in those settings, like Friedl Dicker-Vandais –pioneer in Art therapy–, Charlotte Delbo and so many others, that art can help us conserve our dignity as subjects when reality insists in converting us into disposable objects, and how the creative process can give us back the ability to recover an own name and regain control over situations where we have been violated. Observing the work, realised by Friedl Dicker-Vandais in Theresienstadt, with traumatised children, deserted and torn from their family environment, studying the method she uses to transform them into observers of reality, aware of their surroundings, master of their own perceptions, as well as capable of exteriorising their fears, anxieties and the terror that invades them, makes us realise how the art world can be a safe space where people can start feeling human again. Where they can start thinking again they can be loved, that they can love again.

Trauma is, by definition, as pointed out by Van der Kolk (2015, 2), unbearable and intolerable. The common denominator of psychological trauma is the feeling of “intense fear, fragility, loss of control and threat of annihilation”1. In this sense, trauma is extraordinary, no because it rarely occurs, but rather because it goes beyond the normal capacity of adapting to life. The human being remains destined to a language-less, preverbal, feeling. His body shows symptoms, relives the terror, rage or impotence, as well as unchaining the impulse to fight or run, of action or paralysis, in ways and feelings which are impossible to understand and difficult to articulate (Van der Kolk, 2015 48). His body keeps the score –just like the title of Van der Kolk’s work says– probably for the rest of his existence.

The psychological trauma is an affliction, defined by the lack of control over the situation, through an absolute lack of power over the circumstances that surround us. At the time of the trauma, the victim feels himself completely vulnerable, and under the power of a force that overwhelms him. When this force is natural, we speak about disasters. When this force is held by other human beings, we speak about atrocities. The traumatic events exceed the normal care systems which offer the people a feeling of control, connection and meaning in life.

In agreement with various authors and experts (Hermann, 1992; Van der Kolk, 1994), we can state that the systematic study of traumas depends on the support of the society where it is generated and of the corresponding institutional and political administrations. The study of traumas, deriving from military conflicts, only becomes possible when a context exists which legitimises this pain and listens to it. The study of sexual traumas only becomes legitimate when a context exists which confronts and challenges the subordination of women and children in this environment and in society. In this manner, and in agreement with Judith Hermann (1992), progress only appears when there is a social –and legal– movement, strong enough to legitimise and embrace the alliance between researchers and patients who confront the common processes of silence and denial. Repression, dissociation and denial are phenomena that occur both in the individual as in the social conscience (J. Hermann, 1992). Meaning, as long as the society in whose centre the trauma has been generated does not legitimise and recognise the victim, does not sanction the traumatic fact, healing is difficult to achieve, since it denies the ongoing healing process in itself.

As such, the marks of this painful event prevent the human being from being happy again. Part of its effects, especially when the painful event is due to interpersonal violence –either sexual abuse, physical or psychological violence, warfare, etc.– is related to physical consequences –a continuously activated alarm system, anxiety, stress, stiffness– as well as with deep psychological marks: inability to tackle the event or tackle it in an automatic way without any real involvement, selective oblivion, dissociation, inability to start new personal relationships, based on trust, etc. The person who went through a traumatic experience which remained without resolve, without assimilating or processing, remains at the mercy of its effects, which will probably be transmitted in an intergenerational manner.

The creative process is a way of giving meaning and creating narratives; it allows us to express in an organised manner the internal material of our experiences

The memory of the trauma is not built up as a coherent story where all aspects of the experience are merged into a narrative and in an integrated way in the vital and intimate dimension of the subjective time, but rather in a way where remembrances of the trauma consist of fragments, separated from conscience, which have not been assimilated and remain disconnected from the global story of the person’s life. This fragmentary condition implies, in return, a lack of control on the side of the victim which gives the traumatic memories an invasive character which will continue torturing the victims for an indefinite period. The time of the trauma remains frozen in the human psyche. A period of time which has come to a stop, impossible to move, terrifying, which comes back over and over again, through intrusive thoughts and nightmares.

The creative process in the assimilation of the trauma

Since a few years, neuroscience has started showing us what artists already knew in a practical manner: that the symbolic language can sometimes help, beyond the analytical and discourse language, in expressing the inexpressible. Theorists of the stature of Van der Kolk, Hermann, Lusebrick or Cozolino (Van der Kolk, 1994; Hermann, 1997; Cozolino, 2014) have demonstrated how the emotional memory, within our brain’s right hemisphere, where the effects of the trauma are stored, disconnected from the discourse thought, can be activated through images, senses, symbols, and recover, through creative processes, a way of assimilating, in body and mind, a painful event.

The creative process is a way of giving meaning and creating narratives. As a structuring process, the creative process allows us to express in an organised manner –through formal structures, related to colour, intensity, lines, planes or marks in clay, stone or other elements– the internal material of our experiences. For the trauma, the exercise of the creative process in therapeutic environments allows the images, linked to these episodes which remained anchored in the subject, often making it impossible to process them, to gradually emerge and experience in a safe way the physical and emotional memories and, in this way, to integrate them in the here and now, so that the neuronal kinaesthetic and emotional routes can learn new ways (Siegel, 1999, in Riley, 186).

In its social dimension, art –combined with its communication component– allows to externalise and share the pain, open windows, show the wounds

In a process of internalisation-externalisation and again internalisation, the assisted creative process allows and boosts the inner chaos and, with it, the images, sounds, body marks, smells, which have remained anchored in the emotional memory, in order to organise and exteriorise it. Starting from the projection of emotional images and memories, in a safe space, the creative process promotes the transformation and the external readjustment of this material and a new internalisation or acceptance, this time with the subject in control of the situation and where his emotions can start being understood and expressed, there where the trauma prevented him from feeling safe or from being able to decide or even to understand. The capacity of the creative process to externalise what remained internalised not only allows to bring it out in the open and observe it, but also to understand and reorganise that what happened, transforming it into a narrative which helps us to continue living.

In its social dimension, art –combined with its communication component– allows to externalise and share the pain, open windows, show the wounds. The work performed, both on the individual as on the participative level, where people have shown images, faces, sentences, names, dates, sounds, of the loss and the destruction, helps, in a communitarian ritual manner, to give shape and social recognition to the pain, fundamental element in the assimilation process of the trauma. The social recognition of the aggression through the collective work, the social condemnation, shows itself as a profound element of repair, essential for the victim, where the human being can start connecting again with the community. Art has always been a loudspeaker for the wounds, there where the State refused to recognise them, and has helped to give visibility to what society tried to conceal: raped or murdered women, as well as missing and tortured persons have been the subject of a big part of art works which have been shown to the public, opening its entrails and the wounds of a –sometimes rotten– conscience.

Art, linked to transitional care processes and connection, reveals itself as a symbolic tool where we can lay down, in a finally safe environment, all the fears we kept locked up at some time in our lives. Art, as a potential space between us and the world, can renew our ability to live and make us think we can start again.

I’m begging you
do something
learn a step
a dance
something that justifies you
that gives you the right
to be dressed in your skin, in your hair
learn to walk and to laugh
because it would be too dumb
in the end
that so many died
and that you live
without doing anything with your life

1. According to the Comprehensive Textbook of Psychiatry.