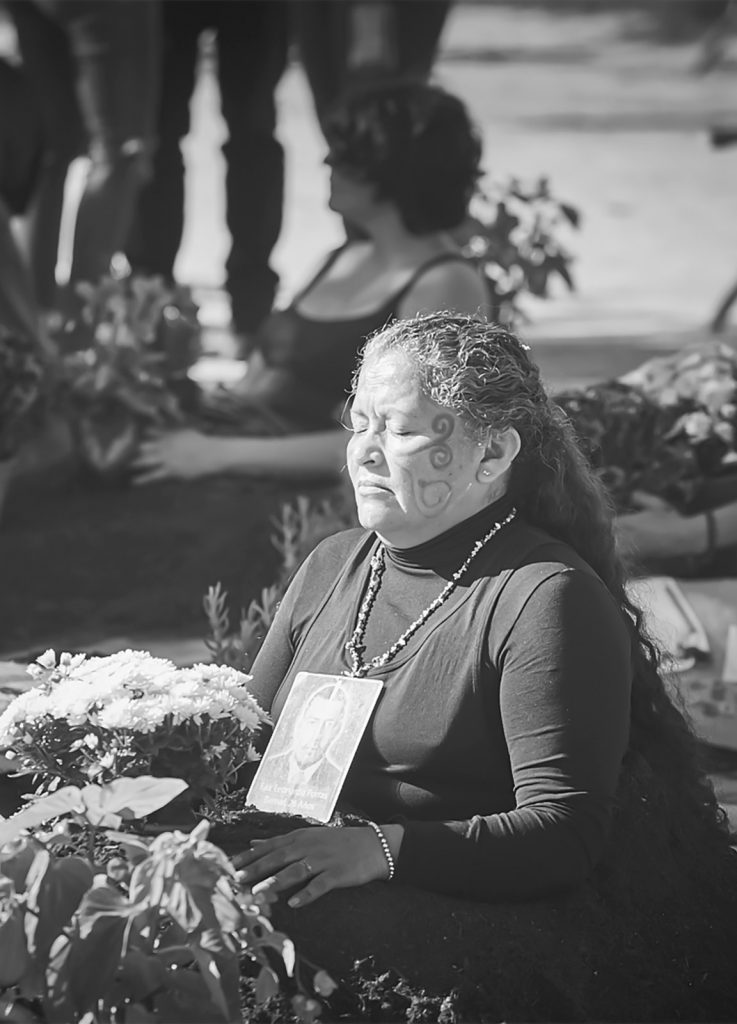 Forced disappearance is a recent problem in Latin-American and Colombian history, for which the State and armed narco-paramilitary groups bear the main part of responsibility. Quoting one of the most horrendous events in Colombian history, on the 16th October 2002, Operation Orión took place in the San Javier area, commune 13 of the city of Medellín, clearly demonstrating that the State –with the support of the paramilitary- perpetrated random attacks on the defenceless civilian population over land and by air. Around 23 other similar operations, such as Mariscal (Marshall), Otoño (Fall), Contrafuego (Counterfire), Potestad (Authority) and Antorcha (Torch) were seen in the city of Medellín, highlighting the problem of forced disappearance in the context of the Colombian armed conflict.

Before, during and after these military operations, a mountain has been growing in this commune: the garbage dump, a place where normally the waste materials of the area are deposited, but which also constitutes the city’s biggest common grave, as it has been used to conceal and bury the bodies of over 300 persons in the context of the armed conflict the urban area has been going through.

Confronted with this situation, the organisations of victims, mainly managed by mothers, spouses, daughters and grandmothers, among others, started to go out to the public spaces to denounce, through collective actions, what was happening at the centre of the armed conflict. These organisations are born as platforms, demanding the truth around the events that took place in the context of human rights violations.

Each year, the missing persons are commemorated and honoured, with the objective of demanding a search of the garbage dump, clarification, complete justice and guarantees to assure that this chapter would never repeat itself, which is why the starting point should be the acknowledgement of the need to produce direct and symbolic acts of resistance to transform and forge the memories of the future.

When we are moved by violence, we also start moving

In this sense, the present article claims to reinterpret the process, developed by the collective Agroarte in Medellín’s commune 13, highlighting the collective actions undertaken and the re-signification of body, life and death in the context of the Colombian armed conflict, with the intention of giving visibility to potential political impact and to the claim for the rights of the victims of forced disappearance in Colombia.

The Agroarte collective was born 15 years ago as an act of resistance against the garbage dump. Right next to this controversial location, women of the area started a project, combining seed planting with musical creations. Shortly after, as the conflict got deeper, the collective’s members received threats against their lives, which is why the action was moved to the lower part of San Javier, where now for the last 10 years, processes have been initiated, linked with memory, reconstruction of social tissue and communitarian empowerment, through the sowing of seeds and art. The forced displacement triggered the change towards new sowing methods in urban areas, on roadsides, on walls and in public spaces, from where scenes of fear and stigmatisation are reinterpreted. When we are moved by violence, we also start moving.

Moving the life and the activity of the Agroarte collective generated new learning processes in other spaces of the city and the country, through the organisation of practices, events and experiences related to sowing and art. The Agroarte methodology is built around the union of knowledge, looking for an expression of the person’s feeling for nature, not of the territory, captured in artistic displays which contribute to the recovery of the collective memory, through the communities’ day-to-day tasks. Stories from the fields, from the land, come together, as described by Aka, founder of the collective: “If hip-hop represents the streets, underneath the streets there is land, and the land contains our history, our memory and our struggle”.

Of the many artistic events, promoted by Agroarte, there is one collective action which has maintained itself and become stronger through the years, holding a special interest due to its reflective and transforming potential for the communities. “Cuerpos gramaticales” (Grammatical bodies), besides being a collective action, projects itself as a methodology we can use to break through in urban public spaces. The performance action “Cuerpos gramaticales” saw the light on 16th October 2014 to commemorate 12 years of Operation Orión. This symbolic sowing of bodies represents the metaphor of life where, as soon as the seed grows, blossoms and produces fruits, it becomes part of the world’s social structure. As one of the members expressed it, “Cuerpos gramaticales” is about finding our roots, not just the ones in the deep and heartfelt earth, but also with our own roots, which lay within the immensity of each single person.

The performance action is based on a series of activities trying to generate reflections on the territory, the understanding of history and achieving of collective catharsis. In these terms, the participants go through a training and preparation process which lasts four months, where they get ready, not just to be sown, but also to understand the pain and the actions undertaken in their own territory. The first phase in the training process aims at preparing the body and mobilising its emotions regarding matters like body-territory, body-memory and literature-body; in a second phase, the staging of the performance action is done, in a setting of encounters, visibilisation and protest, in which the different events in neighbourhoods, cities, countries and the world come together in order to be sown collectively, talking about their resistance, developments and utopias.

The Agroarte methodology looks for an expression of the person’s feeling for nature, not of the territory, captured in artistic displays which contribute to the recovery of the collective memory

This methodology of Agroarte has the purpose of denaturing the deaths, caused by the excesses of violence the territory has been suffering. This is done by creating spaces where the reconstruction of history is made possible by the voices that are resisting to oblivion, generating in return the rejection of armed conflicts of any dimension through actions which give new meaning to life and refuse to forget the crimes, committed against humanity.

The performance action “Cuerpos gramaticales” speaks about these bodies of social tissue which have been fragmented by violence and submitted to conditions of fear and historic silence for years; the action aims at mobilising the political, social and civilian groups with artistic exercises which reveal the struggles that are taking place in the territories. For Wilmar Botina, member of Agroarte and one of the promotors of the action, “Cuerpos gramaticales” not only supports the memory of the victims, it also enables encounters with collective struggles and actions in the territories.

In 2015, the second edition of “Cuerpos gramaticales” was organised, generating a training and preparation process with people from the territory and the city, interested in participating in the performance action with reflections around the political, social and territorial bodies, in which 25 national victims organisations joined. For the third edition in 2016, “Cuerpos gramaticales” was organised in three different locations in Colombia: in Bogotá, in the context of the international day of disappeared detainees; in Medellín, 14 years after the military operations, and in Tumaco, where visibility was given to the threats and forced displacement of young people. It was a commitment for the unification of Colombia’s history and to talk about memory as a form to dignify life and the people who gave their lives while building the country.

This year, “Cuerpos gramaticales” was again organised in three locations in Colombia: Bogotá, in the context of the commemoration of the extra-judiciary executions or, ill-named “fake positives”; in the canyon of the river Cauca Antioquia, in the defence of the territories and a full search for all disappeared persons, and in Manizales, as a claim for the living memory of the victims’ organisations1. Each edition of “Cuerpos gramaticales” has been an occasion to widen and give visibility to the impact of its claims, like the possibility of having a bigger social and political influence with respect to the relevance of forced disappearance as a problem that needs to be addressed.

We understand the need to initiate direct and symbolic actions of resistance in order to transform a society which has historically been hit by violence, silence and impunity. We understand death as a natural process in life, which has been denied to many through the loss of rituals and demonstrations of mourning, due to the lack of an existing body which reflects the truth of the events. People are claiming the person, not the bones, but therefore they need to follow the body’s tracks, which is the reason they organise events where human bodies are sown as live sculptures in the ground. Death is natural, but forced disappearance is not.

1. On 21st October 2017, Barcelona hosts the performance action “Cuerpos gramaticales” in the context of the project “Estratègies de Memòria, veritat i reconciliació de dones colombianes a l’exterior” (Strategies for Memory, truth and reconciliation of Colombian women abroad), organised by ICIP (International Catalan Institute for Peace), in collaboration with Agroarte and the support of the city of Barcelona.