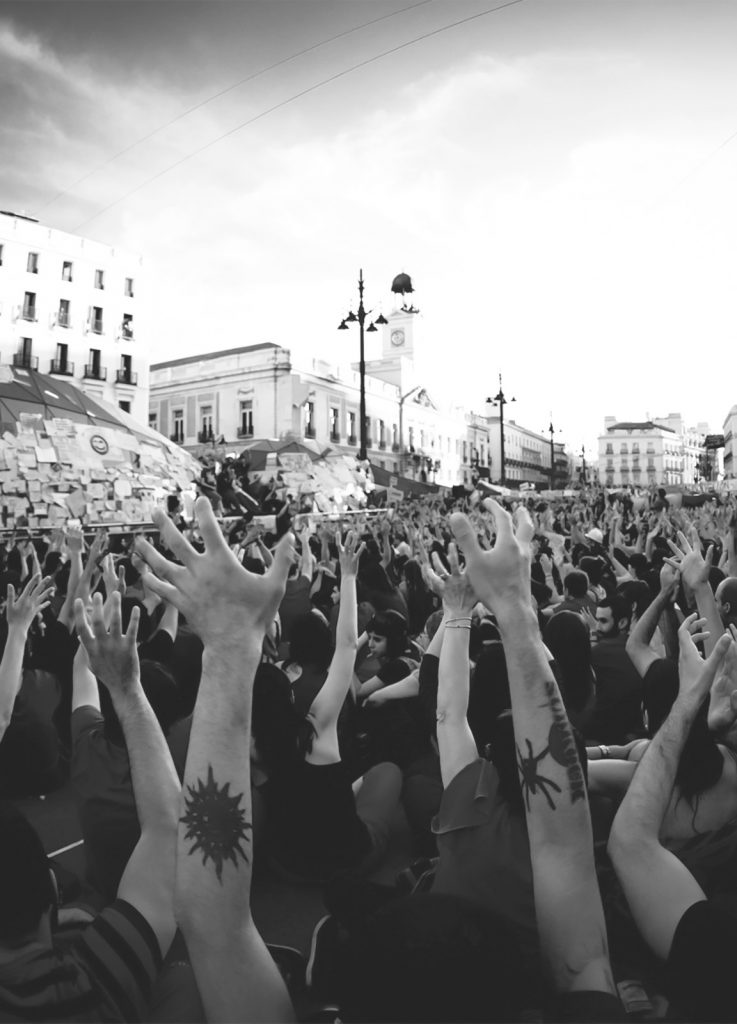 Civil rights, the (in)surge(ncy) of Artivism and the birth of social technologies

In the midst of the world’s reconstruction during the fifties, when the majority of governments had recently subscribed to the Universal Declaration of Human Rights, the awareness on civil rights has been rooted in the societies, triggering several initiatives, including antagonistic ones regarding the means they used: a) disruptive actions, violently opposing the system, like the internationalisation of guerrilla operation by Che Guevara (1963-1967); b) reactive actions in the shape of nonviolent confrontation with the system, like Rosa Parks’ refusal to abandon her seat on the bus which was reserved for white people, in Montgomery (1955); and c) proactive actions, in the shape of constructive alternatives, like Paulo Freire’s “culture circles” where people make critical reflections on their position inside the context (1960-1964), the “self-awareness groups” of the New York Radical Women, popularising the slogan “the personal is political” (1967), or Alexander Dubček’s “socialism with a human face” (1968). These and many other actions seemed to have inspired the writing of the International Covenant on Civil and Political Rights, in force since March 1976 and ratified by the Spanish state in July 1977.

This context in itself encourages the (in)surge(ncy) of the main strategies of artivism or social and political activism through art. The Situationist International inspires the Militant Research –laboratory for observation, filtration and objectification of reality in itself–, as well as Culture Jamming –(counter)cultural interference and alienation. Meanwhile, the “Tucumán is Burning” campaign in Rosario (Argentina) promotes Mediactivism –critical documentary information through non-normalised media technologies and platforms. Culture Jamming and Mediactivism constitute, in turn, the bases for the Communication Guerrilla, a media sabotage strategy usually attributed to collectives like the Guerrilla Girls or Gran Fury. From their side, the Teatro (Theatre) brings down the fourth wall, goes out to the streets and infiltrates the districts. And, along the lines of the Amsterdam Provos, ACT UP!, Mujeres Creando (Women Creating), the Women’s Action Coalition and, later, Reclaim the Streets! (RTS), the Equipos Fiambrera (Lunchbox Teams) and Yomango consolidated Acción Directa (Direct Action), the best known artivist format.

The great artivist strategies have become a regular resource for rallies and sleep-ins against mercantile fundamentalism, war and social cuts

In parallel with artivist dynamics, new collective relationship and interaction models are under investigation in the scientific world. In 1972, the report “Limits to Growth” was published, alerting on the unsustainability of the global growth model and predicting its collapse within a period of 100 years. In view of this evidence and building on Kurt Lewin’s group dynamics, as well as on his Psychosocial Field Theory, Peter Senge tackles the challenge of helping people and organisations to become aware of the thinking and interaction patterns we use to recreate the very system by which we are affected. In addition, in the mid-eighties, Marvin Weisbord suggests to “get the whole system in the room” and creates the Future Search, a method of group facilitation which anticipates an entire generation of Social Technologies1; among them Deep Democracy (Mindell, 1988), Appreciative Inquiry (Cooperrider, Srivastva and Whitney, 1987-2001), Open Space (Owen, 1992), World Café (Brown and Isaacs, 1995) or Change Lab (Scharmer and Jaworski, 2000).

The Change Lab precedes the Theory ‘U’2, a social technology paradigm developed by Otto Scharmer who, precisely, takes the stick from Senge in “closing the return loop between the behavioural representation [visible but unconscious] of the structures of which we have become a part, and the source [conscious but invisible] of our thoughts” (2009: 53, 135). The Theory ‘U’ performs an inquiry on the intention of our actions, on the self-observation for each individual and group, and on our relational field, with the objective of finding the turning point for an æffective transformation (affective and effective) of our surroundings.

At present, we observe how the global nature of civil rights awareness during the fifties, sixties and seventies has been followed by a progressive conscious alterglobalisation against the corporatist economy. The alliance between political and corporate elites, with the objective of privatising public resources, deregulating governments and cutting social expenditure, as well as the so-called “war on terror”, declared after the 9/11 attacks to impose “shock therapy and tabula rasa” (Klein, 2007) with similar intentions, have been contested by a glocal, increasingly interconnected, citizens’ movement: from the Seattle Battle to the World and Intergalactic Social Forums and, from there on, to the sit-ins and sleep-ins in the centre of Beirut, in the temples of Yangon or in front of the Reykjavik Landsdómur; from the Sahrawi jaims of Gdeim Izik to the Kasbah in Tunis, the Tahrir square in El Cairo and the University of Sana’a; from the Puerta del Sol in Madrid to the Syntagma square in Athens and the Zuccotti Park in Lower Manhattan, or the Gezi park in Istanbul.

While the five main artivist strategies –Culture Jamming, Mediactivism, Social Theatre (and within this section, Boal’s Theatre of the Oppressed), Acción Directa and Militant Research–, have become a regular resource for rallies and sleep-ins against mercantile fundamentalism, war and social cuts, the Assembly has been the tool par excellence; an active instrument, only not creative, often characterised by ideological confrontation: a vicious circle of opinions, reactions, replies and counter-replies. Consequently, for this article, I propose an æffective and creactive assembly model –essentially artivist– based on social technologies: an Artivist Assembly.

I propose an “æffective” and “creactive” assembly model –essentially artivist– based on social technologies: an “Artivist Assembly”

We need to specify that each social technology follows a different purpose. Some methods address the processes as a whole –vision, analysis, design and execution–; while others reinforce one or several of its stages, as there are the staging, dialogue, conflict resolution, decision-making or prototype testing. In this case, the Artivist Assembly is based on three technologies –the aforementioned Theory ‘U’, the Design Thinking and the Dia-Tekhnē or Dialogue through Art–, building a structure that combines our three main sources of knowledge: the head (reason, ideas, thought), the heart (emotional experience), and the hands (creative capacity) –John Dewey’s three H’s: Head, Heart and Hands.

Mapping of the context (Head):

• Puzzle of the common stage –formed by the set of pieces of the different agents (one or more pieces per agent)-, which provides us orientation, showing us where each of us is standing and the point we want to reach.
• Identification of shared or complementary needs and challenges.

• Each person involved builds a story which condenses his direct or close experience of a specific shared need or challenge.

• Emphatic listening to the account of the other person, focussing our attention, suspending our judgment (this means, detached and with open intentions) and putting ourselves in his place.
• Practising generative listening, by counting and illustrating the story to ourselves.

• Capture (as if it was photography) the impressions, feelings, images or metaphors, inspired by the listening exercise; and translate them in Ideas-Strength (significant verbal and/or graphic statements).

• Expression of the Ideas-Strength in plastic elements and using those to build Stages of the Future –3-dimensional (if static) or 4-dimensional (if sequential) prototypes or mock-ups where one, two or three steps or immediate actions are represented.
• Design of Environments (or ludic-symbolic transformations of the surroundings), as well as actions or interventions at citizens’ scale: from workshop to square.
• Further sessions of action monitoring and mapping of consecutive paths.

In short, the Artivist Assembly offers to collectives, organizations and communities a proactive format of an intercultural and civic relation and synergy. It leaves us facing the social, political and economic stage, in the same way an artist needs to face his next work.

1. The term Social Technologies is given to the application of scientific knowledge on human systems –and not on inert matter– with the intention of helping them to observe and understand themselves. This concept is synonym for Soft Technologies, or also Emotion and Communication Technologies, meaning, the ensemble of techniques and methods, used for the development of human relations and interactions.

2. For more details on the Theory ‘U’, I recommend visiting or participating in the online course U.Lab: Transforming Business, Society, and Self on the platform edX and on website https://uschool.presencing.com/ulab