Art and Culture: Occupy in Order Not to Back Down

Sidnei Ferreira and Valdênia Paulino
Centre for the Defence of the Rights for Children and Adolescents CEDECA, Sapopemba, Brazil 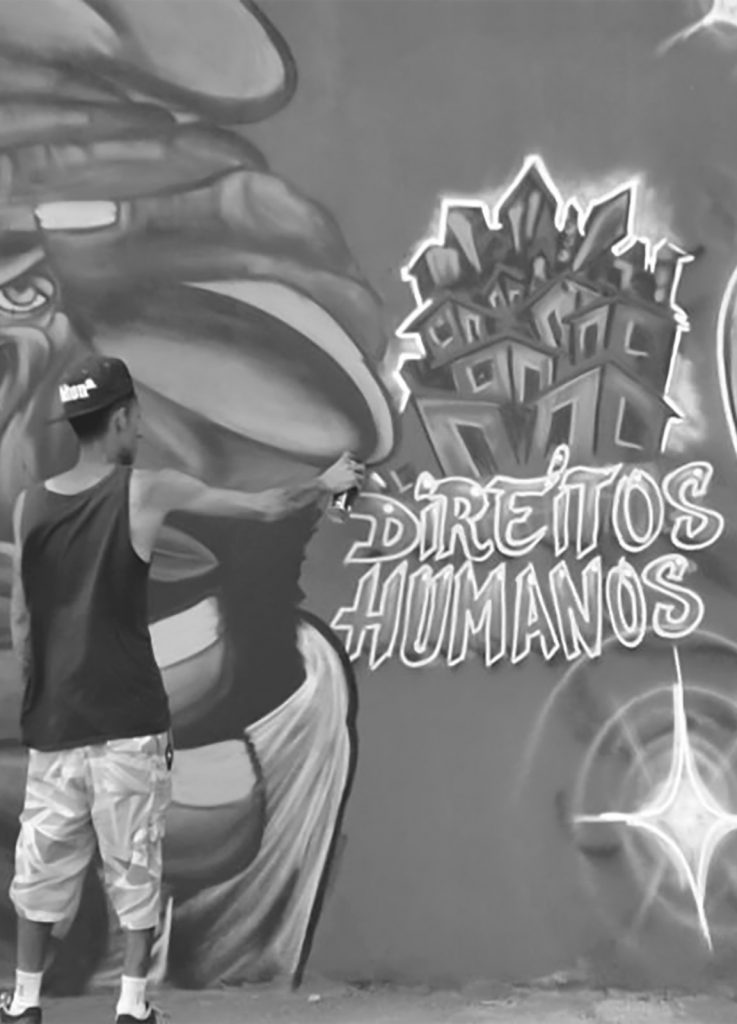 “It was New Year’s eve. Everybody was celebrating. My grandmother’s cabin, a shack in the favela where 12 people were living, own sons and daughters as well as fostered ones, was full of people eating and drinking. The noise of voices was competing with the sound of samba and the fireworks which invaded the sky that New Year’s night. Despite all this racket, the sound of shots, coming from the other side of the favela, caught everyone’s attention. There were many of them. What we didn’t know was that several shots hit two of my uncles, one of them 10 and the other one 19 years old. They were two of the eight people, killed in the carnage at the end of that year. There were many speculations, but the motive was none other than the fight to control drugs traffic in that area. Those who lived on one side of the favela could not go to the other side without an order from the traffickers. Persons hating others without even knowing them, only due to the fact they were living on opposite sides. My uncles didn’t have anything to do with the quarrel but, as often is said, “they were in the wrong place at the wrong time.”

This was the testimony of the adolescent Paulinho during a round table for the preparation of the Rap em Festa, an event organised by the Centro de Defesa dos Direitos da Criança e do Adolescente – CEDECA (Centre for the Defence of the Rights for Children and Adolescents), with the aim of creating a space for the hip hop movement, the main cultural expression for the suburbs’ youngsters since the eighties; as well as a space for dialogue between the different groups of the favelas in the region and a resistance strategy against the huge pressure and attacks by the police, who insist in criminalising the black, poor youngsters from the suburbs.

Hip hop is not just a music style, but also a culture, a way of life, joining several elements among which we can find criticism against the system of predominant social, political and economic exclusion in Latin America. It allows the young people to bring out their cry of resistance against the many deadly assaults they witness day after day. We’re talking about death squads, hired by traders, about the deaths provoked by the conflict between traffickers, by the violence perpetrated by the military police, and by the complete absence of public policies. In this setting, culture and art become strategies of survival and instruments in the battle for public spaces.

Down the sewer
It’s down the sewer
Where the dignity runs
From the mulatto kid
Who, though innocent,
Suffers the cowardice
Of the uniformed scum
So said the papers
The very next day
Very successful police operation
15 killed, hundreds wounded.

For many years, Rap em Festa has been organised without interruption in the playground of a neighbourhood public school, transforming itself into an important cultural display, as well as meeting place for many young people, both from inside as from outside the area. The preparation of the event took a whole year. Groups from different locations in the region and, quickly, from the entire city and the whole country, agreed on a theme which they would study and debate for months, with the aim of writing song lyrics and designing the production of dances and graffiti.

The agreements of coexistence indicated that the bases of the road towards respect and dialogue had been set. All groups made their presentation. There were two days –and part of the night- full of presentations, inter-territorial dialogue and exchanges. There were some quarrels, which were resolved on the spot, such as having to interfere to avoid firearms or blank weapons to be brought in, as well as the use of drugs in the school. But nothing the assurance of a warm welcome, the passion for art and mutual respect could not resolve.

Soon, the CEDECA understood that culture is the best way to build up dialogue and consensus between young people. But also that was the subject of a dispute. In Brazil, for a very long time, politicians and authorities have used popular art and culture with the objective of entertaining the masses (people living in a situation of poverty) to prevent them from thinking. In this manner, besides keeping them under control and alienated, they were able to increase their own personal fortune through artistic contracts without previous public tender process. Amazing! Everywhere, young people are echoing their cultural knowledge. For CEDECA, humour, sports, art and culture are cornerstones because they bring along an interactive power, capable of generating peace dialogue in war zones.

The cultural projects grew. In the capoeira, the memory of the black people’s resistance during centuries of slavery; in the samba, history, politics, social inequalities, the day-to-day life in the favelas and morros2, the pain and love, sung in poetry to the sound of percussion instruments, cavaquinhos and guitars; in the rhythm and poetry of RAP, the cry of outrage and the rebellion against the contemporary systems of death. And that’s not all! The urban dances transport the bodies of the black and poor youngsters to places, forbidden by the unofficial social apartheid. On the walls, their boldness shines through the graffiti strokes. And we cannot forget the popular libraries: a small corner in a room is enough to pile up those books whose stories will never be told by the official education channels.

It became CEDECA’s main worry to find ways to make progress in the dialogue with other suburbs and in the occupation of spaces which were still impregnated with the culture of violence, since the fear to cross unknown areas, the criminalising police control and low self-esteem continue to confine many young people in these territories. As such, we’re working in these spaces, through artistic and cultural activities, to give new significance to the suffering, the fears and the processes of humiliation, trying to discover hidden talent and knowledge. Getting to know the other through art allows us, beyond the exchange of knowledge, to exchange affection and to reveal collective identities. Identities which are denied and subdued by the political and economic elites, who fear the awakening of the suburb youngsters’ critical conscience.

“I went back home with a library book when a policeman stopped me, took the comic book away from me and tore it. It was humiliating. I felt a lot of anger”. (André, 10 years old)

CEDECA is present in the public schools’ playgrounds, spaces the students used to avoid and which now have acquired a new meaning, thanks to the cultural activities. Moreover, it is also present in public places and sports fields, in a fierce battle against drugs trafficking and the concomitant police violence.

We’re talking about a presence which had to be conquered, starting from many challenges. External and internal challenges. The external ones are related with the fight for space against criminal groups, the attenuation of public and private security forces and the generational and racial prejudice of the community’s public institutions and conservative groups. On the other hand, the internal ones are linked with the deconstruction of the macho and homophobic culture many youngsters still display. If we can say that economic inequality is a matter of consensus, it is sometimes necessary to continue questioning those other issues in the content of the different cultural events.

We know that we can only face and overcome inequalities collectively. Only organised movements can constrain and give new meaning to the spaces of power. And the cultural movements can precisely influence in this area; by boosting dialogue, the exchange of knowledge which emerges from the black and poor youngsters, the aggregation by means of expressed affection through art and dealing with the genocide of young people. Therefore, it is necessary to occupy the spaces. Occupy in order not to back down.

Don’t lose faith, just continue
They say he’s better!
Subprefecture “Trincou” is now called “Rua Nova”
They opened a trench, we can pass like pigs between the trash

Revolution?
No, no, no…
This is no revolution.

Art is gratitude
For the Erês3 respect, loads of respect
Hoping they’re not like so many others…

2. Litteraly “hill”. The morros are the places where the favelas are located. In fact, favela is the name of a plant that grows in the hills. When, a long time ago, the inhabitants of Rio de Janeiro climbed the hills, looking for fruit and flowers to sell, they said they were coming back from the favelas, which is the origin of the name of these settlements.

3. The Erê is the intermediary between a person and his orisha (according to the candomblé, every persons is a son of orishas; this means, divinities, daughters of the unique God Olorun), it’s the coming out of the inner child inside each person and resides in the exact point between the person’s conscience and the orisha’s unconsciousness.

Photography: Sapopemba, Brazil, Centre for the Defence of the Rights for Children and Adolescents (CEDECA)