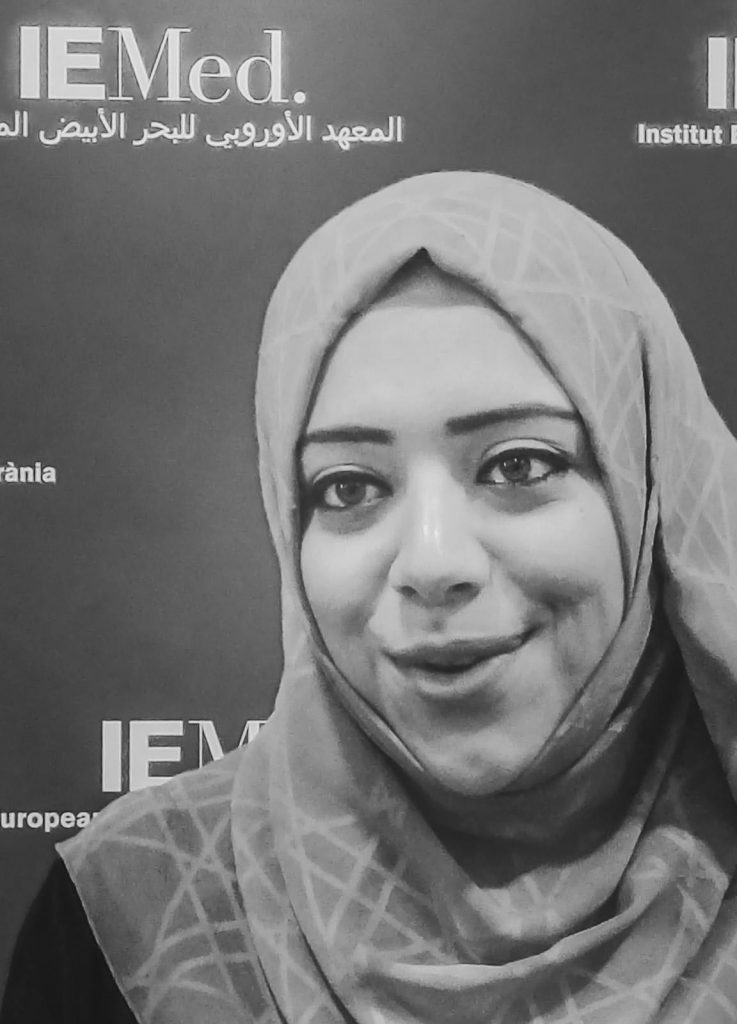 Ethar El-Katatneyis an award-winning journalist, a blogger, and an author. She has worked as a staff writer at several Egyptian newspapers and magazines and often contributes to a number of International media.

Ethar El-Katatney is an award-winning journalist, a blogger, and an author. She has worked as a staff writer at several Egyptian newspapers and magazines and often contributes to a number of International media. Born in Saudi Arabia, raised in Egypt, and educated in Western schools, El-Katatney travels all over the world for conferences promoting dialogue between different religions and cultures. In this interview she argues that identity-related conflicts in Egypt have increased because of the fear and uncertainty of the people after the revolution, and she considers that the Arabic language does not necessarily work as a peace maker tool in disputes between Arab countries, but that it helps to cut across barriers because it connects them all.

From a conflict transformation perspective, how can we prevent a conflict from turning into violence?

The problem in Egypt is that people are so poor and hungry that they are not going to sit and discuss their ideological differences because they simply have more urgent priorities. However, from my point of view, things that have actually been successful in bringing different people together and interacting are charity projects, no matter where they come from, or peace projects that make them realize that the others are just like them. While giving speeches in schools I realized that talking to people is definitely not enough: Things need to be done in action. Children of schools in Said have to figure out how to live so, when I go there, I try to find a way to bring comfort to them rather than discussing the idea of democracy, for example, that for them is an intangible value that does not affect them in their daily lives.

Would you say that most of current violent conflicts in Egypt are identity-related?

Conflicts related to identity issues have definitely increased in recent times. We have a huge Christian Copt population in our country, at least 10% or 15%, and around fifty churches have been burnt down, one of which was over 1400 years old, older than Islam. I do not think that Muslims hate Copts, it is just the way authority works in Egypt. For example, the boss shouts at their employee, the employee shouts at his wife, the wife shouts at her child… So, since Copts are in conditions of less authority than the Muslims in Egypt because they are a minority, they get shouted at.

That church was standing for over 1400 years, why was it attacked now?

Because people are afraid. The harder their lives are, the more afraid they are and the more difficult it is for them to try to accept other communities. Now people only want to stay with whoever shares the same identity and ideology, whereas before they would have interesting discussions among each other. For example, someone from the Muslim Brotherhood and someone liberal would come together and have interesting debates, but the more afraid they are the more they retreat back into what they know. Now they only want to watch the television that supports their point of view, they do not want to be intimidated or challenged in any way.

Do you think that sharing an Egyptian identity can unite people professing different religions?

Under the Muslim Brotherhood’s rule, the media narrative placed religion to the forefront. Mursi’s rule created such a polarization that even within Muslims themselves there has been an incredible binary opposition. It’s not only Christians against Muslims, there are also the Muslims who supported this political ideology against the Muslims who did not, and therefore were infidels. Mursi’s speeches always started with God, his narrative was about Muslims and excluded the Christians, some of whom had to escape Egypt. That is why there was an increase in the visual aspects of religion, such as the use of nicab. Now under Al-Sisi the patriotism is being played up again, we are all Egyptians, he tries to bring back inclusiveness but the old narrative still has an impact on people.

Can language have a role in reducing disputes between Arabs from different countries?

I do not think the Arabic language works necessarily as a peacemaker tool, but it works to cut across barriers, so you actually know what is happening when you hear people or when you read articles posted online or posts on twitter… The language connects all Arab countries so none of them will be isolated from another and this is really useful when you want to engage people in peace-building activities or charity work because if someone does not understand what they are writing or doing, he is not going to give his money or his time for that.

Why is the standardized and literary variety of Arabic used in writing and in most formal speech (i.e. Modern Standard Arabic) so difficult to learn?

The way we speak is definitely not the way we write, it is like if we wrote in Shakespearean Language but we spoke in slang, and that has actually created a conflict, especially now that globalization increases. The more people speak English, the less Arabic they speak, even me, I speak Arabic fluently because that is the language I speak at home, but because the written standard is not the same as what we say, and I did not read a lot, it is actually a lot harder for me to write in Arabic than to write in English. Across the Arab region, the more educated you are, your Arabic goes down as your English goes up.

It is like if we wrote in Shakespearean Language but we spoke in slang, and that has actually created a conflict, especially now that globalization increases

What is the relationship between Modern Standard Arabic and colloquial language?

The dialect we speak is a combination of different languages. In Lebanon, for example, the way they mix Arabic, French and English is very clear. Modern Standard Arabic is very different from any dialect. About five years ago, they created a book written in colloquial language, which is like publishing a book in English with phrases like “how r u”. I am very much in favor of such an initiative because it is connecting to a generation that completely abandoned their language because they could not understand it and, therefore, they did not read it. My grandfather was shocked when he saw that book and there are those who say that the Arabic language has to be preserved because it is perfect and it is the language of the Koran, the holy book, but the reality is that by changing it slightly a lot of people will read it more and maybe that is a good thing, you have to be flexible. The book عايزة أتجوز I want to get married, written by Ghadah Abd al-Al, is another example of that: It came out of a blog written in colloquial language and it had millions of readers across the Arab world. My cousin, 15, who had never picked up an Arabic book before, read it enthusiastically.

Given that language is an intrinsic part of a people’s identity, how can these writings in colloquial language affect the Arab identity?

Colloquial Arabic should not be a substitute of the Modern Standard Arabic. If you do not understand anything of Classical Arabic you will never be able to interpret, for example, the depth of the songs of Umm Kulthum, the lyrics, the poetry… you will not know that there is a huge part of your identity as an Arab that you are missing out.

There are other languages spoken in Egypt besides Egyptian Arabic, such as Saidi Arabic in the South and Nubian languages in the Upper Nile Valley. Does that create tensions of any kind?

Saidi Arabic, for example, has specific words that I only understand because my father speaks that language but, overall, we understand each other, and if we do not we ask. Beyond language issues, most of current conflicts in Egypt relate to other dimensions of identity and culture.