Protest under attack from all four sides 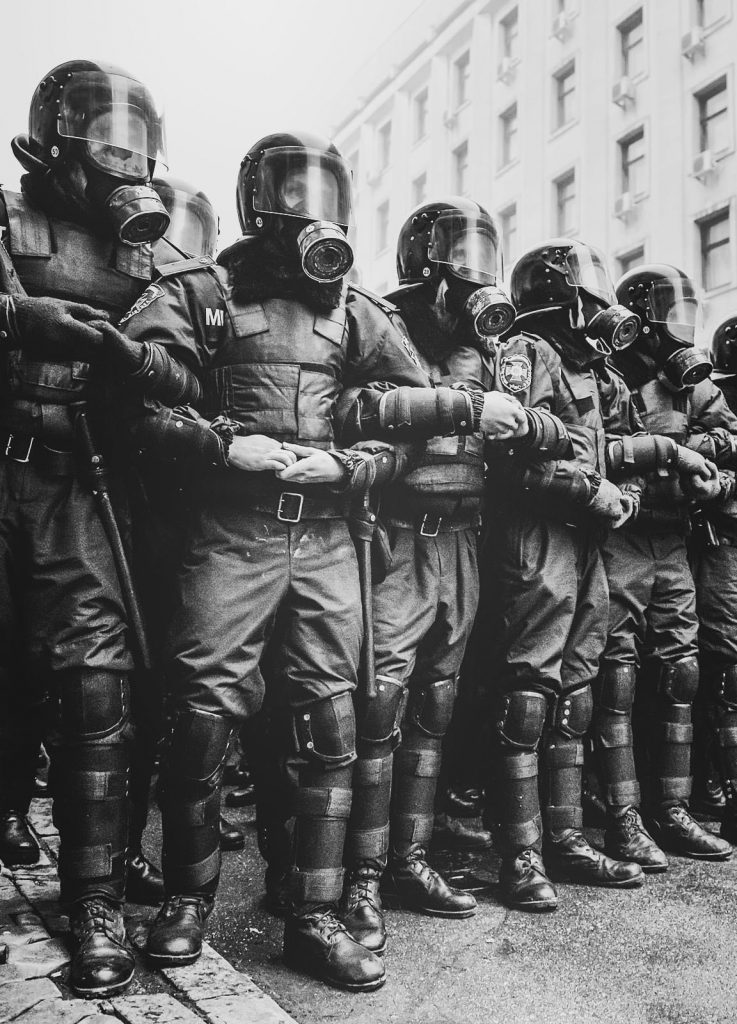 The crisis and the austericidal measures promoted by our different layers of government (European Union, states and regions) have led to unprecedented cuts in our social programmes and thus to a decline in the effective enjoyment of various economic, social and cultural rights, such as employment, health and education. These cuts are contested, every single day, in the street. Demonstrations, rallies, the occupation of public spaces, citizens’ assemblies… According to declarations of the Director General of the Spanish police, Ignacio Cosidó, in his most recent appearance before Congress, there have been almost 100 such protests a day since 2012.

And what is the official reaction to this social discontent expressed in the street? To attack. But not a frontal attack, rather an attack which arrives, and even seems to be coordinated, from four different sides.

Protest or dissent is not recognised as an independent human right. However, some of the elements that make it up are so recognised, such as the right to demonstrate, freedom of assembly and freedom of expression. These rights are considered to be closely linked to the existence of a democratic society, because they are essential for its construction. And these rights are currently being besieged — the word is by no means an exaggeration — by a persistent and sustained offensive which is attacking them — in fact, attacking us — on all four sides, from four branches of power: the executive, the legislative, the judicial and the media.

From the executive power we are witnessing a use and abuse of violence and force by the security forces which can no longer be considered anecdotal or sporadic. There have been too many cases of violent police charges (perhaps the adjective is redundant: I don’t know if there is such a thing as a “non-violent police charge”); disproportionate and provocative deployments of riot squads (and here the adjectives are definitely superfluous); and guidelines from policy makers which are clearly intended to intimidate and discourage social mobilisation, with arguments about the need for public safety… the latter referring almost exclusively to the protection of property.

We must not forget that the main role of the police with respect to a demonstration or protest is to protect the demonstrators and their right to express and defend their opinion. However, justifying their actions by the burning of rubbish containers or damage to bank premises, security forces give priority to the protection of these material goods over the physical safety of people. When there is a criminal act, the police must act and try to arrest those responsible. But between that and the abuse of force and endangering people’s physical safety, as has been denounced by various international human rights bodies, there is a chasm, which it seems we have decided to jump over.

The government appears to have forgotten that as the guarantor of human rights it is its obligation to respect, protect and guarantee these rights. That is to say, the state cannot violate human rights (respect), it must lay down appropriate conditions for the enjoyment of these rights (protection) and the system must establish appropriate remedies when it cannot avoid a violation (guarantee). Respect, protect and guarantees of the right of assembly and freedom of expression have a very special place as fundamental elements of the Constitution. However, this special protection under the Constitution may not be sufficient, because the legislative branch has also decided to attack.

The recently passed law on private security, the reform of the Penal Code, and the attempt to reform the Public Safety Act, are just three examples of the legislative offensive whose aim is to try to silence and criminalise protest. On the one hand, a growing number of criminal offenses have been introduced which are clearly associated with protest actions; on the other, more and more powers and discretion are granted to security forces, some of whose functions have even been privatised, with all that implies in terms of loss of public control and accountability.

And faced with the violation of rights, when the subsequent guarantees should come into force, these generally help to reinforce the circle of impunity. Allegations of ill-treatment and torture by security forces during protests have until now almost always had a very short life in the courts. The lack of thorough investigation, the presumption that the authorities are telling the truth and the application of court charges are some of the elements that lead, in most cases, to claims not being submitted, or to their being dismissed in the early stages of judicial proceedings.

Still, there are exceptions, and there have been several convictions against abusive and disproportionate policing. At this point, however, we come up against the phenomenon of the official pardon granted by the executive, thus completing the circle of impunity we spoke of. There have been too many examples of pardons for this type of crime, pardons which only serve to give the message, wrong from our point of view, of “don’t worry, these convictions are just a mistake that can be rectified”.

The law on private security, the reform of the Penal Code, and the attempt to reform the Public Safety Act, are just three examples of the legislative offensive whose aim is to try to silence and criminalise protest

As a democratic society we can allow neither this climate of fear of protest nor this circle of impunity. But we do allow them. And we do so, among other reasons, because the fourth attack, that from the media, is continuous and systematic. We find that the mainstream media promote one sole message about protest, which identifies protesters as violent, immediately stripping them of humanity and thus opening the way to justifying their being repressed, violently if necessary.

The construction in the public mind of the concept of security is a joint task in which the media have a lot to say and contribute. Defining security solely in terms of public order while ignoring other aspects, such as its economic, social or political dimensions, helps to legitimise the use of violence against those who demand a different and safer social order, with jobs, education, health and diverse uses of public spaces, including for protesting.

At this point some alternative sources of information appear, sources which are still in a minority but are certainly growing. And we find a clear example of the importance of the social role of the media in the attempts at control and censorship that these alternative sources are beginning to suffer at the hands of the state.

In our view, the defence against all these attacks must involve the strengthening of civil society, the promotion of a clear and explicit awareness of our rights as citizens, the search for international backing through human rights protection mechanisms and changes in the way of doing politics, so as to re-establish the respect, protection and guarantee of these rights as a main priority.