Manel Vila
Promoter of the Foundation District 11 – City to City 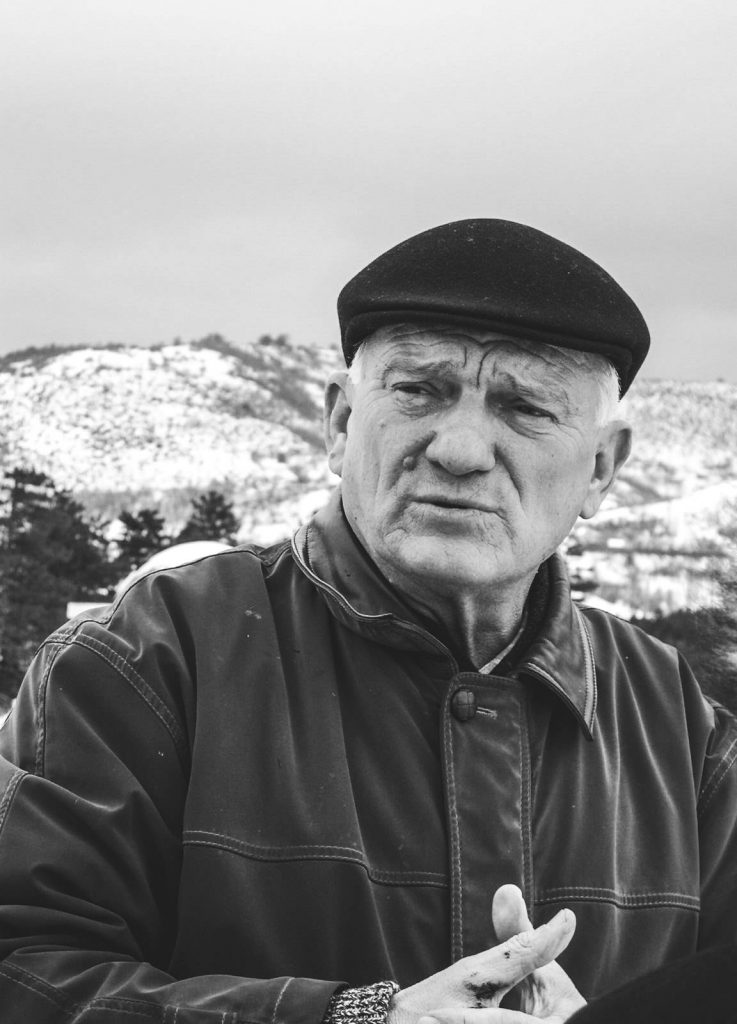 Jovan Divjak trained as a soldier at the Military Academy of the Yugoslav army and occupied the highest rank in the Teritorijalna odbrana (TO), or Territorial Defence Force, of the Republic of Bosnia and Herzegovina. In Sarajevo, the soldiers of the Yugoslav People’s Army received the order to leave their barracks and occupy positions around the city. The General remained in Sarajevo and the Bosnian Government put him in charge of defending the city. Later, he was responsible for cooperation with civilian organisations and institutions.

Before we saw him in uniform visiting troops, carrying out inspections or organising the famous convoy to exchange politicians in besieged Sarajevo. Now we see him in civilian clothes at the headquarters of a foundation dedicated to children orphaned by the war, and he tells us that he remains the same. He hasn’t changed, he hasn’t deserted, he hasn’t disobeyed. He insists that he has always been moved by the same ideals: it was the others that changed sides.

The feeling of love for others and the desire to work for peace are values he learned at home, with his family, and they have always accompanied him. The clothes may have changed but the General didn’t suddenly see the light in a road to Damascus conversion, he has been promoting life from the very beginning.

“I took the decision to stay in Sarajevo when I understood Karadžić’s intentions. My motivation was to defend the lives of the citizens of Bosnia and defend the ideal of multiculturalism.”

His father, a teacher, had already fallen in love with Sarajevo because of his work and having been transferred there. Jovan was born in Belgrade but his military career and successive postings also took him all around the country. But he always returned to his city, which is none other than Sarajevo, a Sarajevo that now perhaps no longer exists. But he has no doubts about the personal decision that marked his life: to defend his city and its citizens. He has insisted repeatedly: “I took the decision to stay in Sarajevo when I understood Karadžić’s intentions. My motivation was to defend the lives of the citizens of Bosnia and defend the ideal of multiculturalism. The propaganda was based on the idea that Serbs didn’t have the same rights here as Bosnians; that, of course, was not true. They continually repeated the lie that we couldn’t live together.”

The Sarajevo that its citizens defend is special. Maybe the first time it appears in our history books is because of the assassination of Archduke Franz Ferdinand, heir to the Austro Hungarian Empire, in June 1914; this was the spark that set off the First World War. It became famous again when it organised the 1984 Winter Olympics, the first games presided over by Juan Antonio Samaranch, and the Olympics that ended twelve years of variously motivated boycotts. Reading the well known tourist guide “Trotamundos”, published in 1984, gives one an idea of what the city meant within the Balkans. According to the guide:

“Sarajevo, more than any other city in Yugoslavia, is a symbol of the coexistence of different cultures and religions, at the same time as it enriches and complements them. Here, East and West meet each other and merge together. From one end to the other, the city shows its different influences: austere buildings from the Austrian imperial era and ancient Turkish houses with their characteristic wooden balconies. All this harmonious amalgam of influences is summed up in the following story: ‘One day, a Muslim wanted to sell his house. “How much do you want for it?” a friend asked him. Three hundred thousand dinars, answered the Muslim, but the price includes my neighbours, a Catholic and an Orthodox Christian. When you cry, they will cry with you; when you laugh, they will laugh, and when you are sick, they will be at your side… And that, my friend, is priceless’.”

Well, unfortunately, of this beautiful European city — the only city in Europe whose skyline includes the four churches: the Catholic Cathedral, the Orthodox Cathedral, the Great Mosque and the Great Synagogue — the most recent memory we have is the cruel siege that it suffered during the Balkan civil war, twenty years ago. There are many stories about agreements that were noted down on a restaurant napkin. In the Balkan wars which led to the dismantling of Yugoslavia there was a piece of paper on which Tudjman, as the Croatian leader, and Milosevic, for the Serbian side, decided the boundaries of the new states: from Sarajevo to the sea plus Herzegovina for Croatia; everything from Sarajevo northwards for Serbia. The problem became the cosmopolitan Olympic capital and the warlords’ decision to submit it to a siege that would bring about the exodus of refugees and the division of the communities by culture and religion.

Today, years after the Dayton accords, Sarajevo has changed because of the displaced people, the refugees, those who are absent: the 11,541 people who died between 1992 and 1996 and who were recently symbolically remembered in the city with a long line of red chairs. But Sarajevo has survived as the capital of Bosnia and Herzegovina, thanks to the likes of General Divjak and many other anonymous people who bear witness to the struggle of a city, the struggle for certain ideals and to the pride and strength to resist. He personifies the dignity, the principles, the honesty and the profound pride of belonging to Sarajevo. Alma, who now lives in Catalonia, was in besieged Sarajevo until the last moment. A few days ago she said: “I felt safe because I knew that the General was in the city and he symbolised the defence of our Sarajevo.”

Jovan Divjak personifies the dignity, the principles, the honesty and the profound pride of belonging to Sarajevo.

A war ends when the powerful can no longer go on: when some have become rich; when those who had to decide, take a decision; when those who have to press a button, press it; when those who had to pick up a phone, actually pick it up and talk… It is then that the war officially ends, and Jovan — a man who speaks plainly, who speaks to the people, who was born in Belgrade — becomes a problem for the men of the Bosnian government born in Dayton, and they quickly transfer him to the reserves. I know he thought he could play an important role in the creation of the new army, of the new country, at the academy… But suddenly he is moved to the reserves and it is then, luckily for all of us, that he reinvents himself.

All those reasons, all those experiences of children who lost their families, of young people torn apart by a war between neighbours… led him, twenty years ago, to dedicate himself to Obrazovanje Gradi BiH (OGBH, or “Education builds Bosnia and Herzegovina”), educating to construct the new country. The foundation has helped the children of victims of the 1992-95 war in Bosnia-Herzegovina, as well as talented disabled children, to successfully complete their schooling and become productive members of society. With their project, Children of war victims – our permanent concern, they have kept the doors of number 4 Dobojska Street wide open for those in need of moral and material support. Thanks to the work of friends and volunteers, they have given more than 30,000 scholarships and have distributed school materials worth more than €2.4 million. More than 1,500 children have participated in trips and exchanges to get to know new cultures and societies, from Canada to Uruguay. Some 280 of these war orphans have already graduated from university and found a job. Since the school year 2005/2006, they have also worked with children who are victims of social exclusion and those from the Roma minority. These results have been achieved mainly thanks to the support of individuals and groups of citizens, with little government aid. As Jovan Divjak sometimes says, the activities are based on the message of the French philosopher Diderot: “Happiest are the people who give most happiness to others.”

This happiness is what people like Jovan Divjak show every day, as a soldier working for peace, as a peace builder. An irreplaceable human being.